The end of the Great Moderation and the return of volatility

Since the mid-1980s, the macroeconomic volatility has declined to a postwar low. The Covid-19 crisis brought one of the largest economic shock in modern history and could mark the end of the Great Moderation i.e. a turning point with higher economic volatility and a shift to a higher inflation regime. Those factors are likely to lead to higher financial market volatility than in the previous two decades.

Since the mid-1980s, the volatility of output growth and inflation has declined to a post-war low in most OECD countries. A number of factors have been put forward to explain this period, known as the “Great Moderation”.
First, many structural changes have taken place: (i) increasingly sophisticated computer technology has enabled companies to optimise inventory control; (ii) development and deregulation of financial markets have made it easier for companies to finance their investments; (iii) the transition in advanced countries from industrial to service economies has helped to smooth the business cycle; and (iv) the growth of global trade and the free movement of capital have increased the flexibility of economies, making them more stable.
Second, progress has been made in terms of economic policy. In particular, central banks have gained greater independence, which has enabled them to better fulfil their primary responsibility of ensuring price stability. Central banks have become more transparent in their operations and have improved their communication with the markets. The result of these developments has been a better anchoring of inflation expectations.
Finally, exogenous shocks have become rarer and less destabilising. In short, the decline in macroeconomic volatility is due to both “good policy” and “good luck”. Surprisingly, the great financial crisis did not end the Great Moderation. In the US, for instance, output volatility was never as low as in the 10 years preceding the Covid-19 crisis.

Since the mid1980s, the decline in macroeconomic volatility is due to both good policy and good luck.

However, looking ahead, it is open to question whether some of the factors that led to the Great Moderation will act in the opposite direction: the reshoring of certain value chains in the wake of the Covid-19 crisis, the fragility of the service sector in the event of an epidemic, and the expected rise in inflation are all factors that are paving the way to bumpier cycles.
This may lead to an unstable scenario of ‘fiscal dominance’, in which expansionist fiscal policies are combined with accommodative monetary policies to alleviate the debt burden. But such a situation would put central banks in a difficult position of having to contain inflationary pressures and maintain financial stability at the same time. At the end of the day, the ability of the policy mix to smooth out cyclical fluctuations as effectively as in the past is questionable.
Rising public debts and inflation could be an obstacle to stabilisation policies. Private and public debt levels have reached new heights with the Covid-19 crisis, surpassing previous peaks reached at the end of World War II. Looking ahead, rising debt levels are likely to dampen domestic demand. While inflation is welcome in facilitating deleveraging, it can also put central banks in trouble, especially if inflation expectations are not well anchored.

Debt accumulation is a complete game changer from a macro-financial standpoint. Too sharp a tightening of monetary conditions (an increase in short- and longterm interest rates) would inevitably lead to a risk asset correction and trigger a “balance-sheet recession”. Not to mention the fact that economies may face more exogenous shocks in the future (such as epidemics, climate shocks, and conflicts). In a nutshell, both “good policies” and “good luck” may disappear at the same time.
The recent surge in output volatility has been accompanied by an equally large increase in corporate earnings volatility, while inflation volatility has remained contained at this stage. Market volatility has so far been contained, thanks to the ultra-expansionist policy mix and the absence of inflation. This may not last. Bumpier business cycles would inevitably be accompanied by a resurgence of volatility in financial markets.

Bumpier business cycles would inevitably be accompanied by a resurgence of volatility in financial markets.

Financial markets went through a phase of extreme volatility last year. Stock markets fell by over 30% in a month, and implied volatility moved to levels not seen since the Global Financial Crisis, with the VIX above 80%. The selloff was followed by a strong rebound, which brought indices back to pre-crisis levels by the end of the year. Bond markets have been very volatile, too. Sovereign bonds rallied strongly at the peak of the crisis, followed by a bear market. As a reference, the Bloomberg Barclays US Long Treasury, which aggregates Treasury bonds maturing over 10 years or more, is down by 26% year-on-year. Credit spreads have moved up and down quite significantly over the same period. The oil price deserves an award in the volatility contest, with the 1-month WTI contract moving from $50 to $15 in one month and actually turning negative (-$40), due to an unprecedented glut at the Cushing hub for a couple of days. Did these extreme asset prices movements reset market volatility higher for a prolonged period?
In fact, they did not. Although bond market volatility remained high in the first quarter of 2021, due to higher-than-expected growth and inflation prospects on the back of US stimulus plans and accelerated vaccination rollouts, equity and credit volatility came down sharply.
Previous market moves over the past two decades have generated short-term spikes in asset price volatility but have not changed the volatility regime and average levels over longer periods. For example, in the European context, Brexit or the Euro crisis triggered volatility spikes but both realised and implied volatility came down quickly soon afterwards across asset classes, including sterling or Eurozone periphery bonds. Therefore, these shocks in isolation have not been be enough to reset market volatility higher, largely because the “whatever it takes” fiscal and monetary response managed to calm investor fears.
Last year, asset price volatility was the consequence of an economic crisis, which deserves all superlatives. Yet if cross-asset volatility has come down very quickly, it is because the fundamental backdrop does not allow otherwise or because market participants believe that the “Great Moderation” regime is still prevalent. Therefore, the Covid-19 crisis will be a turning point towards a higher volatility regime only if one or several factors, which define this regime (and drive volatility) change post-crisis.
Asset prices in aggregate could be more volatile than in the “Great Moderation” regime going forward for at least two reasons: (1) shorter and /or more volatile economic cycles; and (2) lower diversification across the asset classes.

1.If “good luck and good policies” disappear at the same time with no strong-enough rebalancing mechanism, we should expect shorter, more volatile and even desynchronised economic cycles. One consequence would be unstable bond yield curves, with shorter steepening and flattening cycles, and therefore an unstable discount factor. Shorter economic cycle’s means more volatile corporate earnings, and companies will find it more difficult to issue long maturity bonds as investors will ask for a higher premium to hedge against a shorter default cycle. In this context it’s probably the volatility of volatility that could be higher. 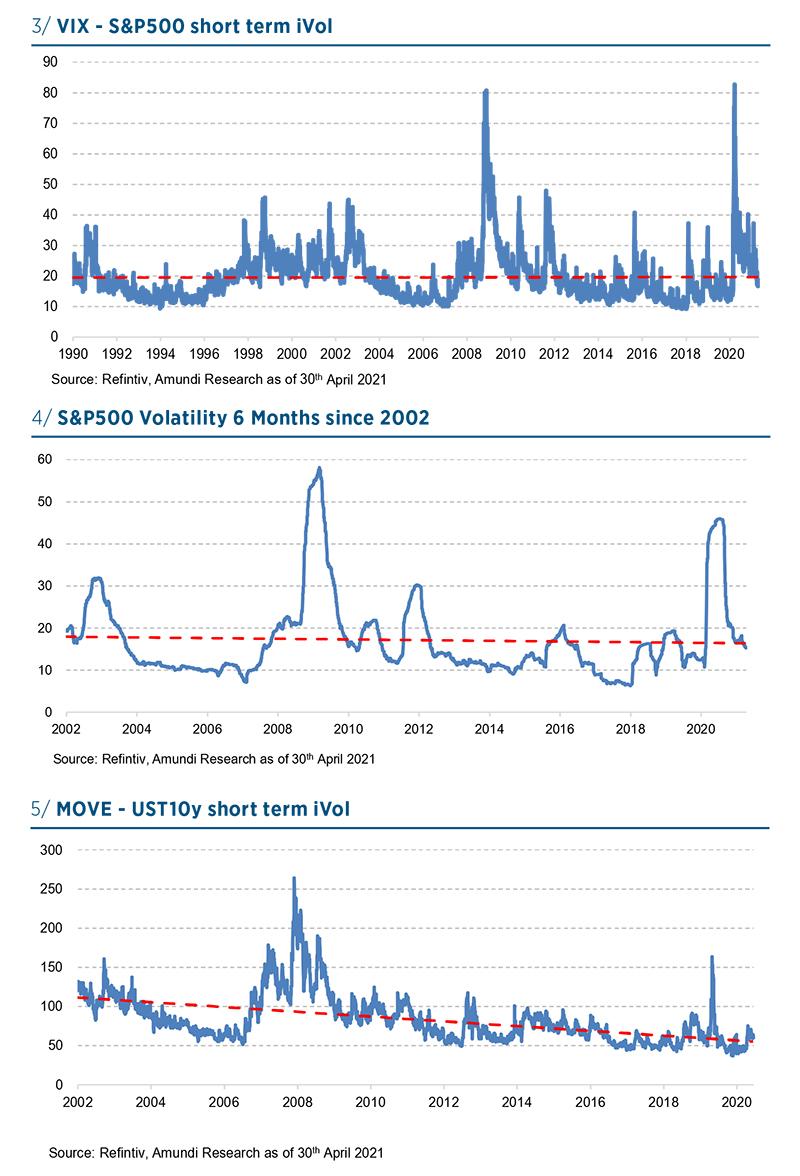 Over the past decades, various shocks have generated temporary spikes but have not been be enough to reset market volatility higher, largely thanks to fiscal and monetary responses

2.The second changing factor could be lower diversification. The main source of diversification across financial markets is the negative correlation between sovereign bonds and equities. This negative correlation established since the middle of the 1990s acts like a shock absorber. Central banks emphasise this absorbing mechanism in lowering policy rates and buying long-term bonds via QE. But both the negative bond/equity correlation and monetary easing are possible in a low inflation regime where inflation expectations are well anchored within a long term deflationary trend. The end of the ”Great Moderation”” could be an environment where inflation is higher than the past two decades and inflation expectations unanchored. In this environment, the correlation between bonds and equities is close to zero or positive (except in phases of equity market sell-offs). Central banks will not be able to keep loose monetary policies over long periods, and balanced portfolios will be less protected by their bond parts. Therefore, investors will tend to switch on and off their equity positions using cash to reduce risk, which leads to higher volatility of the equity market.

The Covid-19 crisis could be a turning point towards higher volatility of the economic cycle and/or a shift to a higher inflation regime. Those factors are likely to lead to higher financial market volatility than in the previous two decades. However, until the shift is confirmed, investors will remain in the “Great Moderation” paradigm, bringing asset price volatility back to its low average levels.