Job market integration within the Eurozone from 2008 to 2020: a challenge for the ECB?

The shock to the Eurozone job market in 2020 was considerable. Hardest hit were southern countries, young people and women.

The shock to the Eurozone job market in 2020 was considerable. Hardest hit were southern countries, young people and women. We discuss below these various factors of market fragmentation in the largest Eurozone countries. In addition to aggregate employment figures, major central banks are looking more and more closely at the structure of employment (by gender, skills and country), as excessive job market fragmentation could undermine mediumterm price stability. This includes the ECB. The lack of convergence could be one justification for keeping monetary conditions accommodative for a long time to come.

Gaps are still wide between countries and are widening in employment2. Each crisis is the occasion of a new divergence shock. The one that occurred in 2020 was especially hardhitting, and the one that occurred in 2008 was only partly made up by periods of growth.
There is an even wider divergence in youth employment3, and crises have an even greater impact on this age category.
The structural trend that is shifting the structure of employment from low-skilled jobs towards higher-skilled ones is expanding divergences between countries, particularly through the recent incapacity of southern countries to develop more highly skilled jobs. Correlation between countries has been greatest in women’s jobs, driven by political and cultural will, at least until 2019 but divergences are still wide and worsened considerably in 2020.

Gaps are still wide between countries in employment

Will the Next Generation EU recovery plan be enough to reconverge countries?

1/Comparative analysis of Eurozone employment in the entire population, among young people, and between genders

Employment developed more favourably among women than men from 2006 à 2020.
Only from 2015 to 2017, when job numbers surged, did the trend favour men slightly. Over the entire period, the employment rate among women converged towards the rate among men (by 7 points, or 13%).
The employment rate among women nonetheless varies widely from one country to another – from 50 (the lowest) in Italy to 75 in Germany (the highest). The rate among men is more homogeneous from one country to another, ranging from 60 to 80.
Variability4 between countries widened from 2006 to 2020, less so for women than for men. The impact of the 2008 crisis caused growing divergences until 2013, which were then offset partially by job market growth until 2019. A new divergence shock between countries then occurred, particularly among women, as lockdowns caused many of them to pull out of the job market, particularly for family reasons and particularly in southern European countries, which are relatively underserved by day-care facilities.
The average trend described above covers trends that differ vastly from one country to the next. While the employment rate rose among men in Germany from 2006 to 2020 (by +9%), it stagnated in France and fell in Italy and Spain (by -4.6% and -13%, respectively), while the employment rate among women rose across the board from 2006 to 2020, but to varying degrees (e.g., from +19% in Germany to +3.5% in Spain). 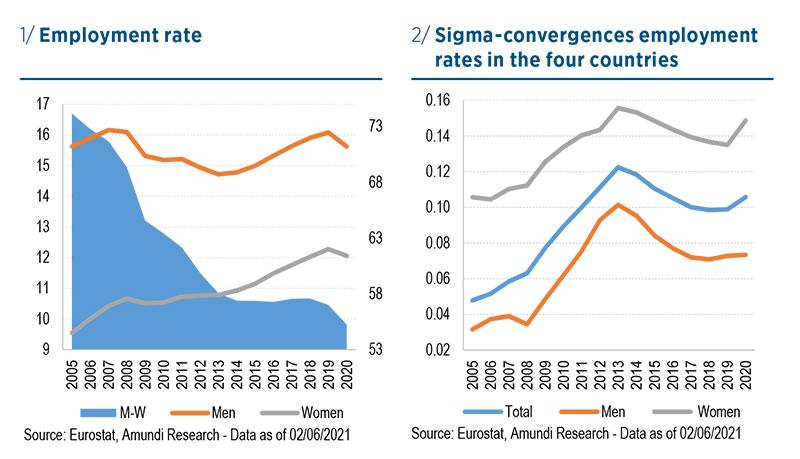 Employment rates among young people diverged widely from 2010 to 2019. While the rate rose in Germany (and in the UK) to close to 50% in 2019, it fell in the three other countries, to close to 20% in southern countries and 30% in France. Employment rates were higher in the UK than in Germany. The Covid-19 crisis widened divergences considerably in 2020: youth employment receded everywhere but in a highly staggered fashion from one country to another. The decline ranged from very low in Germany to considerable in Spain (-17%).
Gaps from one country to another are even greater in employment of women. The two employment rates are closest in the UK , at about 50%, as well as in Germany; they are the lowest, and the furthest apart in Italy (21 for men and 15 for women in 2019). The Covid-19 shock has been very great to women’s employment in Spain and Italy (about 15%), and it has exacerbated the divergences.

Historically, there have been more low-skilled jobs than high-skilled ones in the Eurozone5. These two categories of jobs have tended to converge through greater creations of highskilled jobs than of low-skilled ones.
The breakdown between the two categories of jobs is different between northern Europe, which has more high-skilled jobs, and southern Europe , which has more low-skilled ones.
The proportion of higher-skilled jobs has stagnated in southern countries while rising more rapidly in northern countries. Germany has a higher number of workers in manufacturing than France, and its number of blue-collar jobs has declined less.

There is therefore a widening divergence between Eurozone countries in this breakdown6.
This divergence occurred more during the post-2008 recovery than during the 2008 crisis, but accelerated with the Covid crisis. The Covid crisis had an impact similar to that of the 2008 crisis, but to a far greater extent (-5.93% in lower-skilled jobs in one year and -0.26% in higher-skilled jobs), which accentuated the trend and the divergences among countries. In absolute terms, lowerskilled employment has not been this low since 2008, while higher-skilled jobs are close to their highs.
Italy stands out from other countries and, generally speaking, divergences widened between the northen and southern countries in 2020.

The Next Generation European Union (NGEU) plan serves as a relay to the SURE fund, which supports short-time unemployment benefits. NGEU’s goal is to assist Eurozone countries in proportion to their respective needs, in supporting the recovery and the changes that will help promote that recovery. That being said, it is the responsibility of each country to organise the implementation of the aforementioned mechanisms, including job recovery, assistance for better integration of young people and women on the job market, restructuring, financing, and related legal and administrative procedures, training, digital and environmental changes, and so on.
The 7-8 May 2021 Porto social summit addressed this quite directly and in a highly ambitious manner. It aims to raise the percentage of working 20- to 64-year olds to 78% and the number of adults undergoing annual training to 60% by 2030. 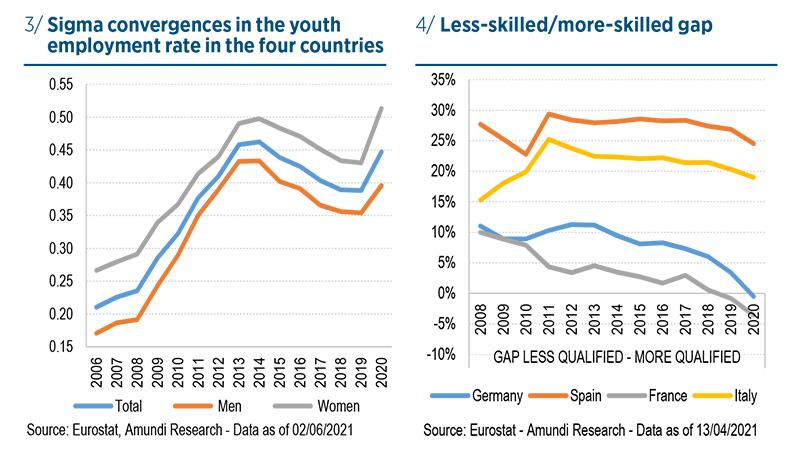 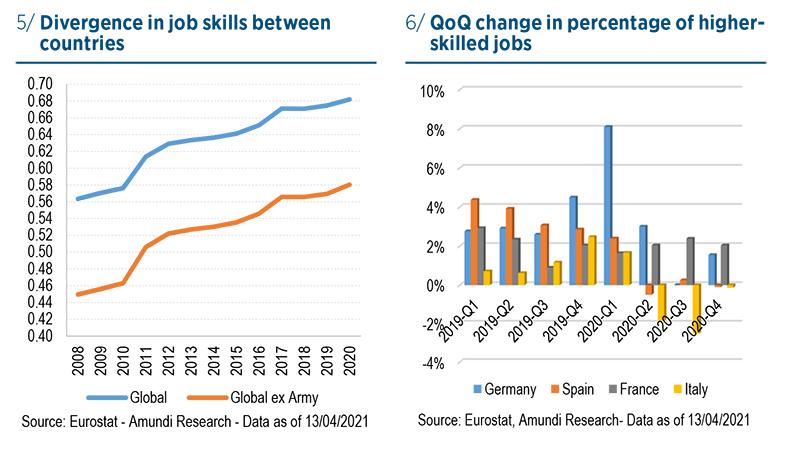 But as the fiscal rules of the Stability and Growth Pact will soon return to the spotlight in the Eurozone, governments and central banks will probably be paying more attention than in the past to actual economic fragmentation. In the United States, as in the Eurozone, central banks are focusing increasingly on the job market. The ECB is focusing in particular on the convergence of national job markets, as this will play a role in medium-term price stability.

___________________________________________________
1 Unless otherwise stated, the Eurozone is assessed through its four largest countries.
2 15- to 64-year-olds.
3 15- to 24-year-olds.
4 Convergence is assessed through the notion of sigma-convergence (see Eurofound research report on “Upward convergence in the EU: Concepts, measurements and indicators), which reflects a reduction (or increase) in disparities in statistical observations between countries over time. It reflects the notion of homogeneity among countries. Sigma-convergence is invariable in terms of scale and therefore helps compare the variability of various indicators (Kenworthy, 1999). CVt= sigma t/ut - Sigma t = variance of the series in t - Ut = average of the series in t - If CVt falls over time (t), there is a convergence in figures; if it rises, there is a divergence. Data are from Eurostat.
5 Jobs considered more higher-skilled: executives, professionals, technicians and related professionals, skilled farm workers; jobs considered lower-skilled: office workers, craftsmen and workers in related fields, operators of installations and machinery and assemblers.
6 Chart 5 covering eight historic countries accounting for 90% of GDP of the Eurozone population: Belgium, Germany, Spain, France, Italy, Netherlands, Austria, and Sweden and providing sigma-convergences (standard deviation from the mean).