What are companies telling us about recession risks?

Inflation is a concern for companies, so too recession. Indeed, the last time managements were talking this much about recession - they were in one.
Tina Fong, Strategist
Schroders, In Focus,19 July 2022

There was an unprecedented amount of inflation talk among US companies at the end of 2021 (see, What analysing language tells us about inflation).

Inflation is still frequently mentioned in corporate discussions along with wages and supply chains. But companies are increasingly turning their attention to the risk of a recession and fears of recessions have never been so high.

How do we know this? Working with the experts in our Data Insights Unit (DIU), we have used natural language processing (NLP) to analyse thousands of earnings transcripts. Transcripts are written text of what was talked about by publicly-listed US companies during earnings calls.

It would be a painstaking exercise to manually go through thousands of earnings transcripts each month. NLP, however, uses the power of computers to track the number of documents that mention a certain word or phase over time.

Over the second quarter of this year, the number of transcripts mentioning the word recession has had the most hits since the Covid pandemic in 2020 (chart 1). Companies in the financial and industrial sectors have been the most active in commenting about recession, such that they account for half of the documented hits on this topic.

While this analysis can only be compared to two recessions since 2005, the surge in the number of recession hits is rather concerning. In the past when this reading has been high, the US economy has been in recession. Here, we are using recessions dated officially by the NBER (National Bureau of Economic Research).

At the same time, the number of transcripts that mentions recession along with words such as ‘concerns’ and ‘fears’ has jumped to an all-time high. Not only are companies talking about recession, but they are also clearly worried about it. 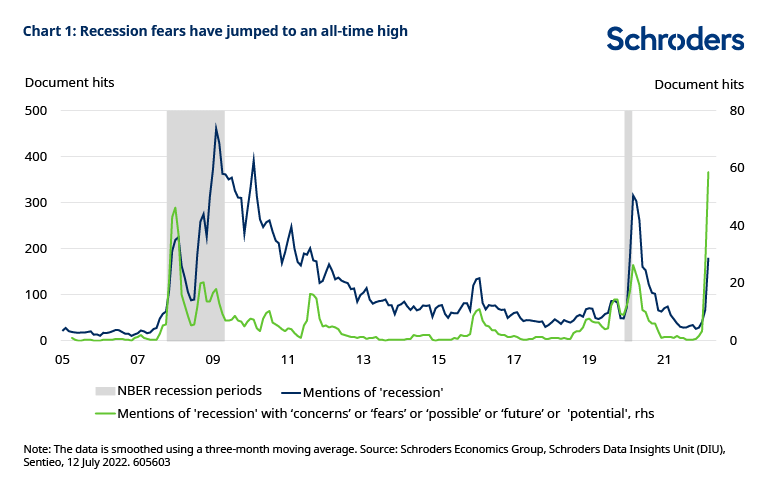 With the Federal Reserve (Fed) raising interest rates rapidly in response to the high level of inflation, it is unsurprising that there is more recession talk among companies and even among the general public. We know the general public is concerned as Google searches for the word recession have surged, and seem even higher than recession chatter among US companies (chart 2).

Perhaps US consumers are concerned about an imminent downturn in the economy, as they are feeling the squeeze on incomes from higher energy and food prices.

In comparison, corporate profits have so far been solid this year, as some companies with pricing power have been able to pass on the higher costs. That said, businesses are increasingly faced with rising wages and commodity prices. So, we could see even more mentions of recession among corporates in the upcoming earnings season.

Companies are certainly commenting more frequently about recession, but there remains a record number of transcripts mentioning inflation along with words such as ‘rise’ or ‘increase’. Chart 3 shows that NLP index of inflation has tracked the actual inflation rate in the US. In other words, discussions among companies on inflation are confirming what is seen in the wider economy. 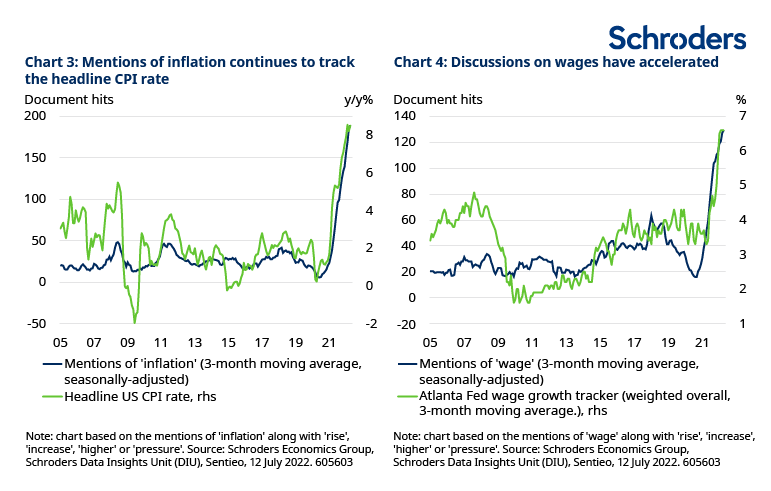 With the mentions of inflation during earnings calls remaining high we have also seen an acceleration in mentions of wages this year. Chart 4 shows that the number of document hits with the word ‘wage’ has risen to an all-time high and has moved closely with wage growth.

So, since the start of the year, corporate management appears to be more worried about the second-round effects from inflation. This is not surprising as inflation has proven to be less transitory, and the labour market has remained tight in the US.

What is the most popular topic of corporate conversations?

In our screening of key words, ‘supply chains’ continued to be mentioned the most, as it did last quarter (chart 5). This is despite the easing in supplier delivery times, according to the purchasing managers’ indices (PMIs).

The risk of more lockdowns in China with the authorities’ continued pursuit of a zero-Covid policy strategy seems the likely driver here. In addition, there could be further disruptions from the ongoing war in Ukraine.

So, it is no wonder that companies are still concerned about supply chain problems. 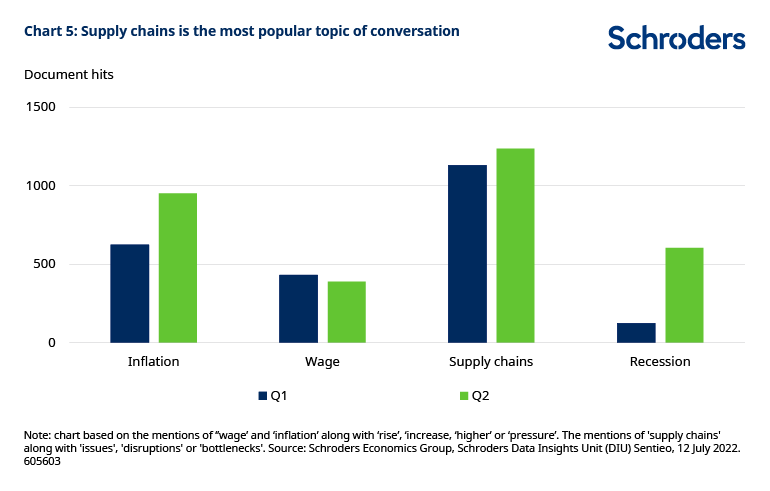 Inflation was closely followed in second place, followed by recession, which overtook ‘wage’ compared to the first quarter of the year.

Looking ahead to the start of the latest earnings season in the US, it will be interesting to see if companies switch from talking about inflation to more about recession. This would suggest that corporates are becoming more worried about growth and the earnings outlook.

This feeds into our analysis of where we might be in the economic cycle, which is the period in which an economy moves from a state of expansion to one of contraction, or recession, before expanding again.

Important Information: This communication is marketing material. The views and opinions contained herein are those of the author(s) on this page, and may not necessarily represent views expressed or reflected in other Schroders communications, strategies or funds. This material is intended to be for information purposes only and is not intended as promotional material in any respect. The material is not intended as an offer or solicitation for the purchase or sale of any financial instrument. It is not intended to provide and should not be relied on for accounting, legal or tax advice, or investment recommendations. Reliance should not be placed on the views and information in this document when taking individual investment and/or strategic decisions. Past performance is not a reliable indicator of future results. The value of an investment can go down as well as up and is not guaranteed. All investments involve risks including the risk of possible loss of principal. Information herein is believed to be reliable but Schroders does not warrant its completeness or accuracy. Some information quoted was obtained from external sources we consider to be reliable. No responsibility can be accepted for errors of fact obtained from third parties, and this data may change with market conditions. This does not exclude any duty or liability that Schroders has to its customers under any regulatory system. Regions/ sectors shown for illustrative purposes only and should not be viewed as a recommendation to buy/sell. The opinions in this material include some forecasted views. We believe we are basing our expectations and beliefs on reasonable assumptions within the bounds of what we currently know. However, there is no guarantee than any forecasts or opinions will be realised. These views and opinions may change.  To the extent that you are in North America, this content is issued by Schroder Investment Management North America Inc., an indirect wholly owned subsidiary of Schroders plc and SEC registered adviser providing asset management products and services to clients in the US and Canada. For all other users, this content is issued by Schroder Investment Management Limited, 1 London Wall Place, London EC2Y 5AU. Registered No. 1893220 England. Authorised and regulated by the Financial Conduct Authority.