"Bond portfolio inflows are likely to be a critical funding source for China’s potential current account deficit, with both foreign private and reserve investors poised to raise exposure to China’s onshore bond market. By changing the composition of some of the bond market’s preeminent indices, there will be implications for bond investors, rates, and currencies."
Tracy Chen, CFA, CAIA
Brandywine Global, Around the Curve, May 28 2019

In 2017, I wrote the blog titled, Where Angels Fear to Tread: China’s Onshore Bond Market, which illustrated the growth potential of China’s onshore bond market and its risk-return profile. For investors who are still uncertain about the merits of China’s onshore bond market, one thing is certain: it’s too large to ignore and the upcoming global bond index inclusion means that investors must map out their strategic outlooks and investment views on this market. No matter whether investors decide to make a direct allocation to this market or not, the impact and implications of the index inclusion will be relevant in many ways. This blog provides an update on the opening of China’s onshore bond market and assesses the drivers behind the change. More importantly, this blog examines the progress that has been made in bond index inclusion and the significant implications for global bond investors.

China’s onshore bond market is now the world’s third largest, behind the U.S. and Japan, with a total outstanding amount of $12.9 trillion as of May 2019. The bonds are currently traded in two separate markets, namely the onshore interbank and exchange markets—the former makes up 90% of the market issuance and activity. Chart 1 breaks down the bond categories, with government bonds accounting for 71% and credit bonds making up the remaining 29%: 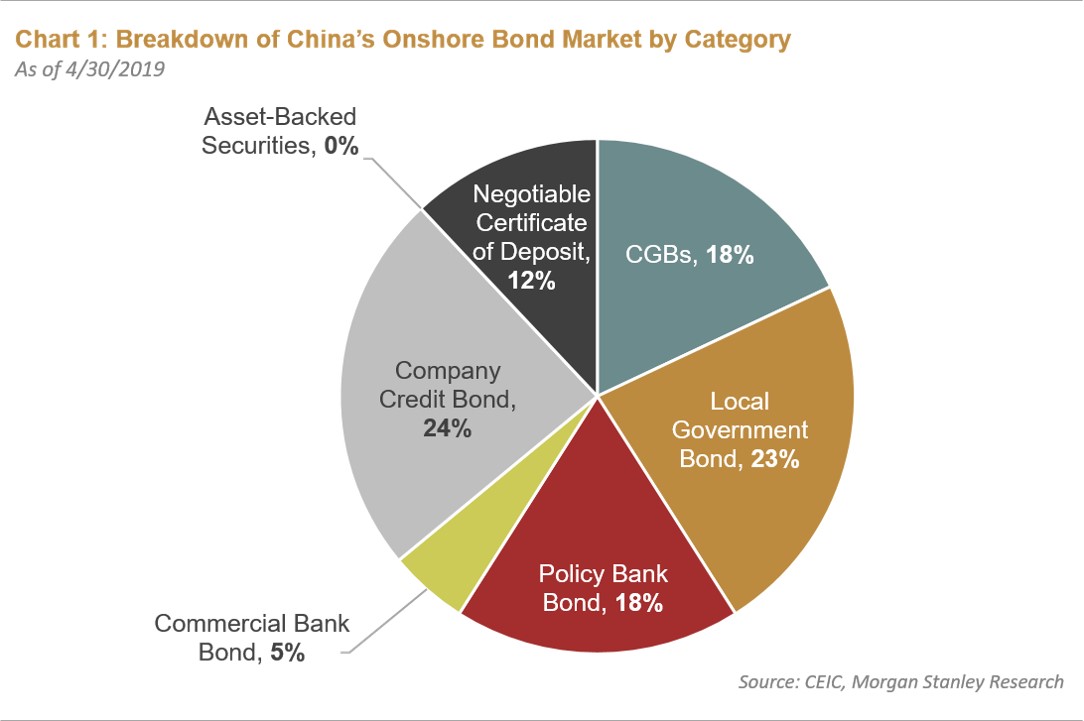 Most of the China’s onshore government bonds are owned by domestic commercial banks, with foreign ownership at 8% as of December 2018, which has doubled since June 2017. However, foreign ownership remains too small compared to other emerging and developed markets (see Chart 2 ):

The Drivers behind China Opening Its Onshore Bond Market

As China rebalanced its growth model from investment/export-driven to consumption and services driven, its current account surplus narrowed from 10% of gross domestic product (GDP) in 2007 and is now close flat (Chart 3). It is quite likely that the current account turns into slight deficit this year. The surplus narrowed due to the peak in China’s market share of global goods exports, rise in domestic demand for imports of goods, and an increase in the services deficit led by the boom in outbound tourism. It was also driven by massive investment from rounds of stimulus after the global financial crisis and the lower savings rate attributed to aging demographics. This structural shift indicates that China has gradually transitioned from a capital exporter to a capital importer.

Therefore, the world should be prepared for the resulting competition for global capital from China. All things equal, the shrinking current account surplus should create downward pressure on the yuan, increase funding needs, and thereby force China to attract foreign capital inflows by opening its equity and bond markets to foreign investors. That is why we are seeing China expand stock and bond connect programs and promote the inclusion of its capital markets in major global indices.

These preliminary measures have been somewhat successful as the absolute number of foreign holdings in China onshore bonds have already dwarfed other emerging market holdings, even with foreign ownership only 8% of the market (Chart 4). In 2018, foreign investors represented 34% of full-year net issuance of China’s central government bonds (Chart 5). 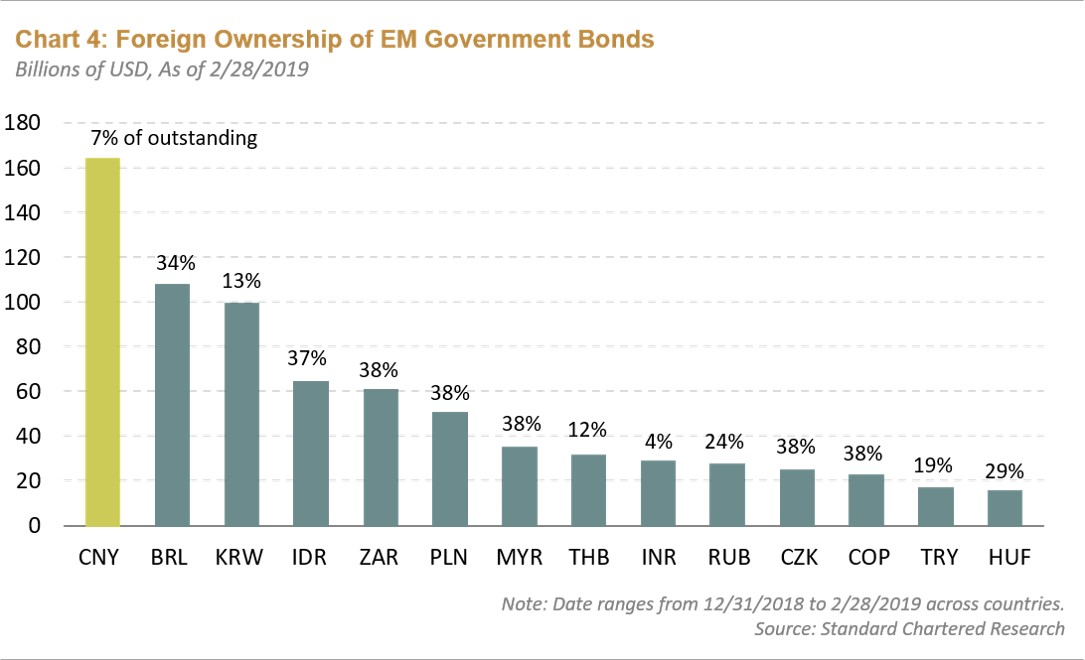 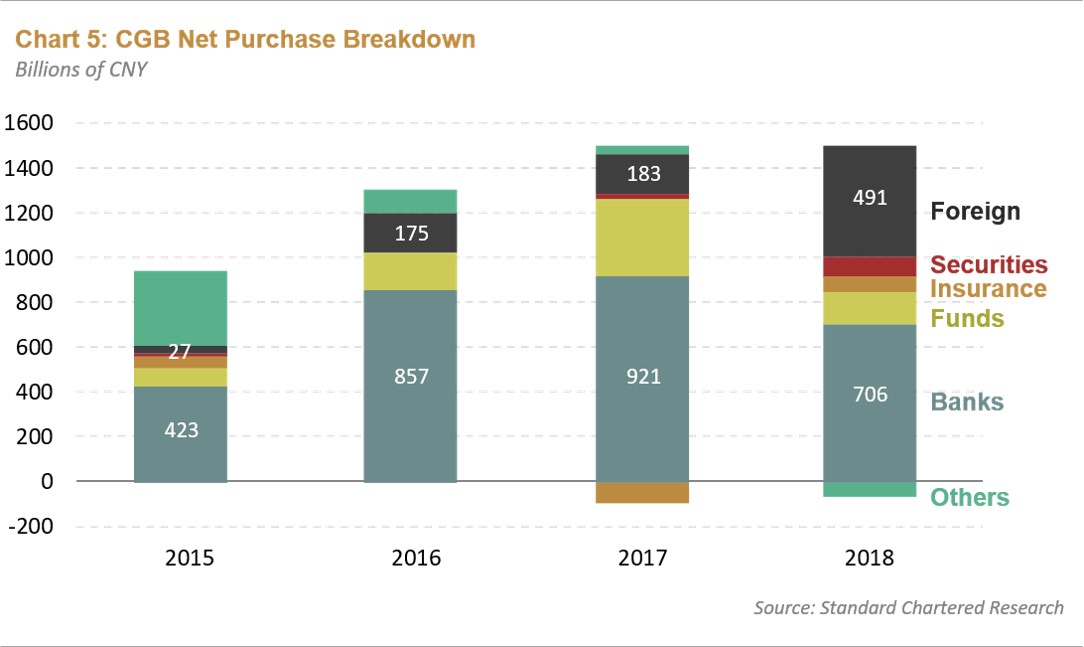 In March 2018, Bloomberg announced that China government and policy bank bonds will be included in its widely followed Global Aggregate Index (Global Agg) beginning in April 2019. The potential weighting could be 6.06% by the end of the +20-month phase in period.

In August 2018, a market consultation was conducted to discuss China’s potential inclusion in the World Government Bond Index (WGBI); as a result, the onshore bonds are likely to be included in the WGBI by March 2020.

By September 2019, JP Morgan will have completed its review of whether to include onshore bonds in the JPM GBI-EM Index, which could happen as soon as January 2020. This is a local-currency bond index that is widely followed by dedicated emerging market investors. Should China enter the index, its weighting is projected to be 10% once the 10-month phase-in period is complete.

As these bonds are incorporated into the three aforementioned bond indices, we will conduct our own fundamental analysis and valuation work on the sovereign bonds to determine whether we’ll initiate a position. We will also consider whether to maintain exposure to the yuan. While that decision will also rely on fundamentals and valuations, it will also be largely driven by the stage of the U.S.-China trade negotiations. Aside from our own positioning, we expect the index changes will have broad implications on China’s capital flows, bond yields, and currency, as well as global capital markets.

The index changes should increase inflows from global bond funds that use these benchmarks and central bank reserve managers that are diversifying from other reserve currency holdings.

With more than $15 trillion of global bonds trading at negative yields, the CGB market offers attractive returns, especially on a cross-currency basis. Historically, this market has exhibited low correlations with other markets and is therefore considered a good portfolio diversifier. These bonds could offer an alternative to safe-haven assets in light of the Chinese government’s fiscal position. Facing a weak economy and geopolitical tension with the U.S., China’s policymakers are likely to keep monetary policy on the easy side, which should benefit CGBs. As policymakers keep monetary conditions loose and easy, the front end of the CGB yield curve will be kept low, and investors should see the curve steepen as inflation and growth pick up. Therefore, the first order reaction to easier monetary conditions would be a drop at the front end of the curve.

Despite the downward pressure on the yuan resulting from the long-term decline in China’s current account surplus, the currency could receive support from the:

Collectively, these factors should provide some fundamental support for the yuan. However, with trade tensions escalating, the risk will be whether policymakers will utilize currency depreciation as a release valve for pent-up economic pressure.

Based on the expected index re-weightings, we could see some developed market sovereign bonds sell off as soon as mid-2019 or as late as the end of 2020. The selling would likely impact U.S. Treasuries, Japanese Government Bonds, U.K. Gilts, French OATs, German Bunds, and even peripheral European bonds. Smaller emerging market countries could see their index weightings decrease to make room for CGBs. Given that China would offer a lower yield relative to other emerging markets in the JPM GBI-EM index, investors may still prefer other higher-yielding emerging market bonds. Therefore, the actual impact should be less than what the index change suggests. However, even partial result of the projected change could still trigger considerable selloffs across developed and emerging market sovereign bonds.

Over the last few years, China has made significant progress in granting market access to its onshore bond market. Including CGBs in bond indices should be the catalyst to attract more foreign investors. Bond portfolio inflows are likely to be a critical funding source for China’s potential current account deficit, with both foreign private and reserve investors poised to raise exposure to China’s onshore bond market. By changing the composition of some of the bond market’s preeminent indices, there will be implications for bond investors, rates, and currencies.