With interest rates tumbling all over the world, gold should be killing it. Instead, gold is getting killed. The major correlation for this precious metal has been the bond market, falling yields. And that makes intuitive sense; gold as a hedge pays no interest, but if competing safety instruments like UST’s end up paying up a lot less then gold becomes relatively more attractive (opportunity cost) as tail risk insurance.
Jeffrey P. Snider
Alhambra Investment Partners, February 28th, 2020

With interest rates tumbling all over the world, gold should be killing it. Instead, gold is getting killed. The major correlation for this precious metal has been the bond market, falling yields. And that makes intuitive sense; gold as a hedge pays no interest, but if competing safety instruments like UST’s end up paying up a lot less then gold becomes relatively more attractive (opportunity cost) as tail risk insurance.

Even as record lows in Treasuries show up way far down the yield curve, fear gold has been hammered into something else. It may be that we’re seeing collateral gold rear its ugly (for precious metals owners) head again. 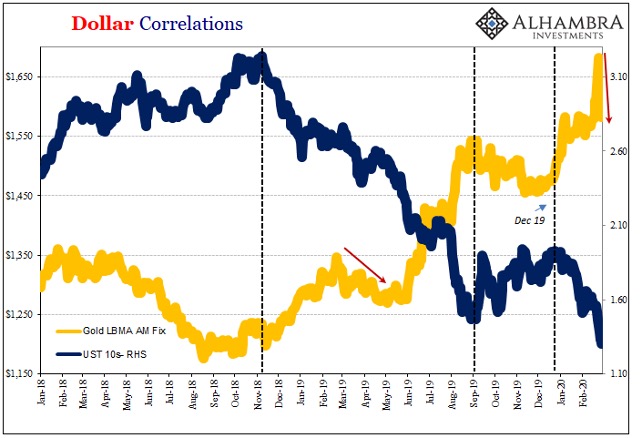 Gold is far from a placid hedge. At times it may be hugely volatile especially when illiquidity is and uncertainty are at their most extremes (see: 2008). The reason is how it can flip back and forth, with fear gold and its safety bid in charge for weeks at a , pushing the price far higher, only to turn it over to collateral gold and the mystifying pre-dawn dumping that typically shows up in this phase, sending prices plummeting.

In contrast to September’s repo rumble, which was nothing more than a dress rehearsal, more recent trading suggests just what markets may have been getting all dressed up to rehearse. No, not G-SIBs and SLR penalties (surcharges, if you prefer), and definitely, unequivocally not “too many” Treasuries.

I’ve been writing for several years how I believe the weak link in the system has been collateral; specifically, the use, perhaps overuse, of junk pieces that dealers were only too willing to take on and transform. To loan out and multiply within a flexible, heaving collateral stream.

It was a risk dealers are still going to be quite familiar with being on the inside, the middle, of that process. What they may have been increasingly shy about over the last couple of years since 2017 was in thinking ahead to how that could unwind unfavorably, to put it mildly. Holding, or being in some way responsible for, not just collateral with falling values, falling prices are just the first step in the direction toward a more dangerous second.

Price cuts are one thing, but if those turn an asset or a whole class illiquid it becomes lights out for it in repo.

And if the system’s one side participants know the dangers embedded in the junk that paraded throughout the other side during “globally synchronized growth”, they might become very itchy, stingy, and shy (not just in repo) at the first sign of a potential price shift – credit spreads. That’s the other part of this; the further away we get from reflation, the greater this perceived risk (and the gamma!) the closer the economy is pushed into a steeper downturn. 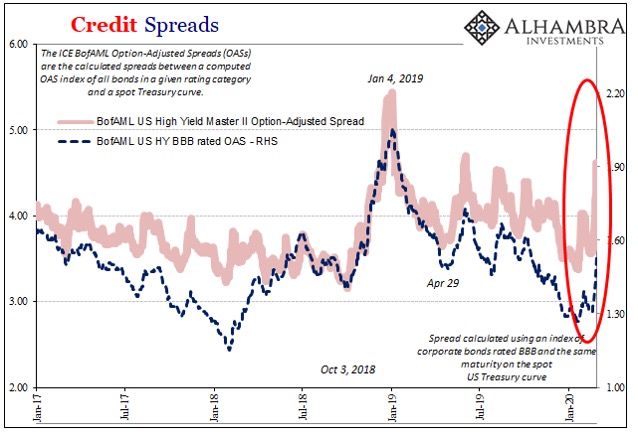 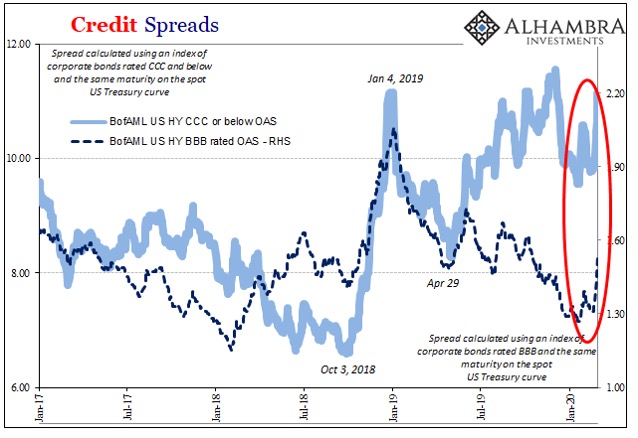 Sure enough, over the last few days credit spreads have jumped. They haven’t been monumental selloffs by any means – but that’s my point. It suggests how skittish money dealers might have become and just how quickly they became it. The smallest hint of that dreaded illiquid scenario and it’s lights out at the speed of light (just ask the NYSE).

Liquidations in every corner (except, of course, the “too many” Treasuries).

Everyone knows junk credit (and that includes EM Eurobonds) had/has been way overdone. Ridiculous, the amount of risk taking. Everyone knows that same junk has been used and multiplied throughout the collateral system. It doesn’t take much of a spark, I don’t think, for a real credit event to materialize unlike the dress rehearsal in September.

And all the while the Fed has been playing around with, what else, bank reserves. Glad to see there are so many more of them.

Gold as also collateral-of-last-resort becomes the replacement for junk that hasn’t even been mauled yet, not really. The sign of a fragile situation, and system.

Therefore, the rest of the bond market running right to DEFCON1 in a heartbeat. Coronavirus? Not really. Collateral-17. 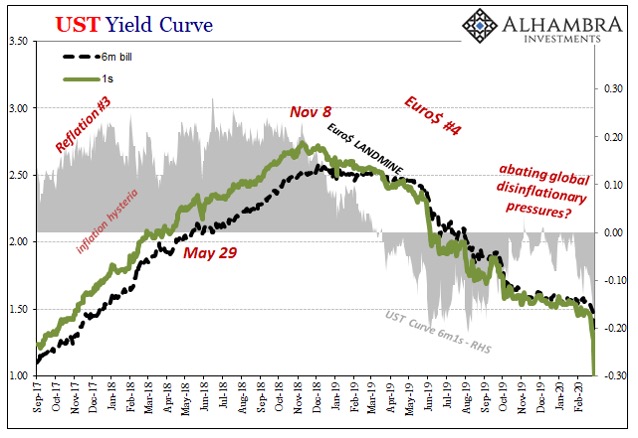 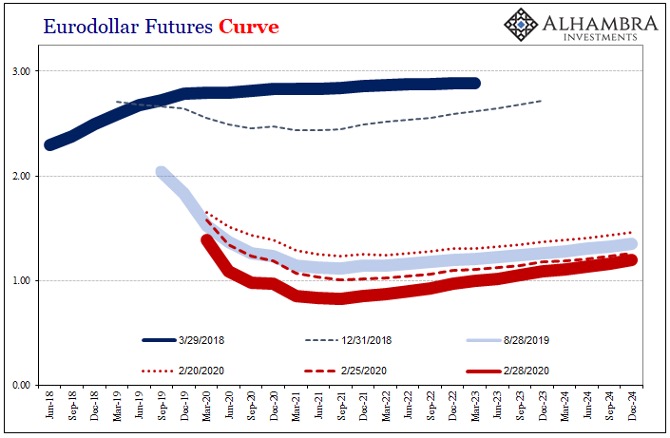 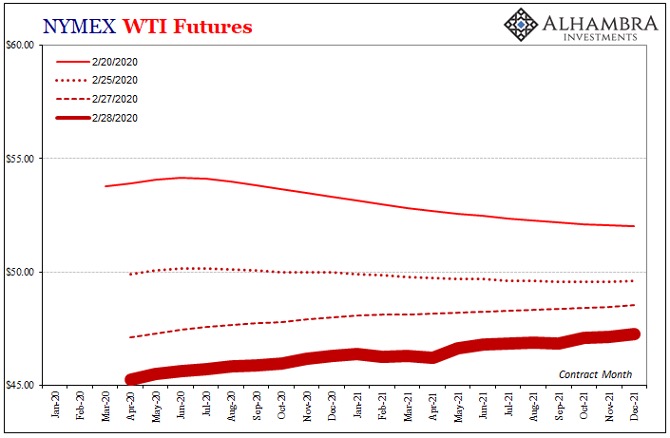 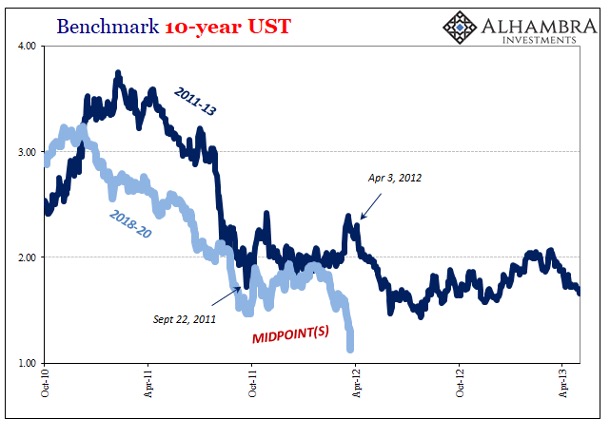 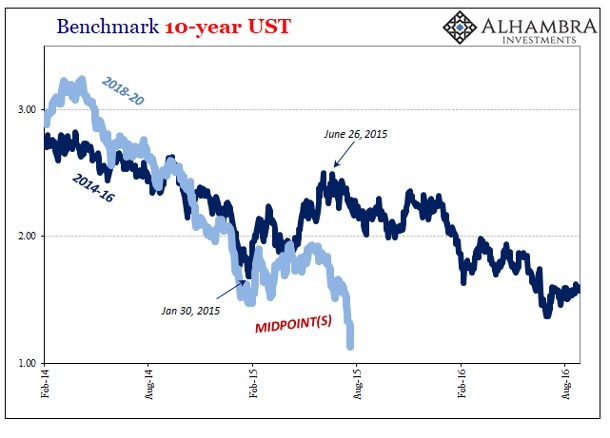