Quick Hit: Digging Into US and European Returns

A look at recent market returns on a geographical basis—and how sector weights may skew your view of them.
Editorial Staff Fisher Investments MarketMinder, 07/17/2019

American stocks have outperformed most other developed markets in this bull market. It seems to us many US investors combine this fact with a bit of home-country bias to conclude US stocks are inherently superior to those outside America. But in our view, this misses a couple things. One, sector composition—namely America’s big Tech sector—accounts for virtually all the nation’s outperformance in recent years. Strip this out, and returns basically match. Two, even including Tech, there hasn’t been material US leadership for most of the last year.

Major geographic regions—like Europe and the US—tend to be diversified across sectors, but there can be significant differences in their weights. Case in point: In America, Tech and the newly formed Communication Services sectors—which includes three of four FANG stocks previously included in Tech[i]—combine for over 30% of S&P 500 market capitalization. The MSCI Europe Index, by contrast, has only about 10% in these Tech-heavy sectors.

Most of the performance difference between European and American markets is due to this discrepancy in Tech and Tech-like sector weights. As Exhibit 2 shows, while Europe (green line) outperformed the US (yellow) in 2017, US stocks surged ahead later—mostly between March and September 2018. But excluding Tech and FANG stocks—the dashed yellow line—America’s outperformance versus Europe effectively disappears. 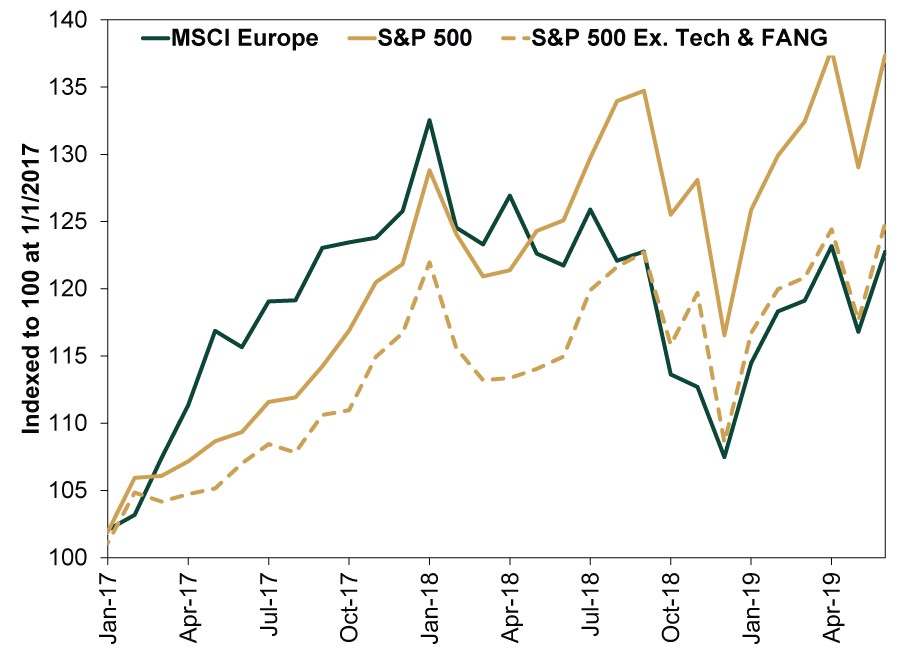 More recently, even if you include America’s Tech and Tech-like giants, there is no identifiable country leadership trend over most of the past year. As Exhibit 3 shows, while there are fluctuations in both directions, MSCI Europe’s relative return has essentially matched the S&P 500 since last September.

We continue to favor big Tech—and mega-cap growth stocks generally—but that shouldn’t preclude owning Europe, in our view. Today, many pundits think Europe’s economic future is exceedingly dour, suggesting tough times ahead for its markets. But in our view, Europe’s economic outlook remains fundamentally fine. The yawning gap between sentiment and reality—doom and gloom despite ongoing growth—is a key reason to be bullish on European stocks. This, plus a positive political backdrop, suggests to us the future for European markets is far brighter than most investors seem to appreciate.

[i] Facebook, Alphabet and Netflix are now in Communication Services, while Amazon remains in Consumer Discretionary.