The intention of this note is not to time the market but to bring together recent data points and compare them to the 1999 ‘dot-com bubble’ to provide some perspective. Does the market today still offer attractive investment opportunities?
Jasmeet Chadha
M&G Investments, M&G Equity Team, 8 February 2021

This is the elephant in the room as investors watch some stock prices soar to ‘eye-watering’ levels. Many investors are wondering where they will be when the music stops, but they continue to play musical chairs.

The intention of this note is not to time the market but to bring together recent data points and compare them to the 1999 ‘dot-com bubble’ to provide some perspective. Does the market today still offer attractive investment opportunities?

Bubbles form in the tail of the market

Moreover, the quality of large-cap tech today is much better. The business models have much stronger ‘moats’ than was the case previously. There are many tailwinds worth highlighting; e-commerce still only constitutes less than 20% of retail sales, cloud computing has a great deal more potential to grow from here, the trend of businesses transitioning from ‘offline’ to ‘online’ is still in its early phase in many sectors, and the valuations of the largest five businesses by market cap are still cheaper versus 1999.

The ‘real’ bubble, in my view, typically forms in the long tail (outside of the large caps). In some ways that makes sense; in a bubble the level of optimism increases and investors start believing in the likely success of any small business that pitches itself as the next disruptor. In 1999, the free cash flow (FCF) yield for this tail reached 1.5%. Today, in tech, that still remains at a very reasonable 4% FCF yield[1]. While valuations are surely pricier than before, 4% FCF yield doesn’t scream ‘bubble’.

The tail of stocks in S&P 500 (i.e. the bottom 495) appears pricier compared to technology. Part of the reason for this is that the measures taken to curb the pandemic hurt the earnings of non-digital businesses a lot more than technology stocks. The US technology sector grew earnings by an estimated 15% in 2020 versus S&P 500 earnings growth forecasts down ca 15% in 2020[2].

Another important difference between today and 1999 is the US 10-year treasury yield. In many ways, this is the cost of capital.

It appears that the recent re-rating in equities has, largely, reflected the falling US 10-year treasury yield. Anecdotally, this fits the narrative that we have heard – for a pension fund the most obvious way to match their obligations, with a 1% US 10-year treasury yield, is to take more risk and increase equities allocation. A lower cost of capital nudges every allocator just a little more towards the next risky asset.

The present low-interest rates versus 1999 make current valuations look very reasonable. Still, the big risk to valuations is the potential for rates to rise. If this were to happen, the market could fall sharply.

Signs of speculation at the expensive end of the market

One of the most troubling signs in the current market is the euphoria in the very expensive part of the market. Many of the technology businesses trading on lofty valuations are loss making. If we compare the share of loss-making businesses in the most expensive quintile of the market then and now – in March 2000, when the ‘dot-com bubble’ burst, it was 96%, currently we are at 86%.[3] 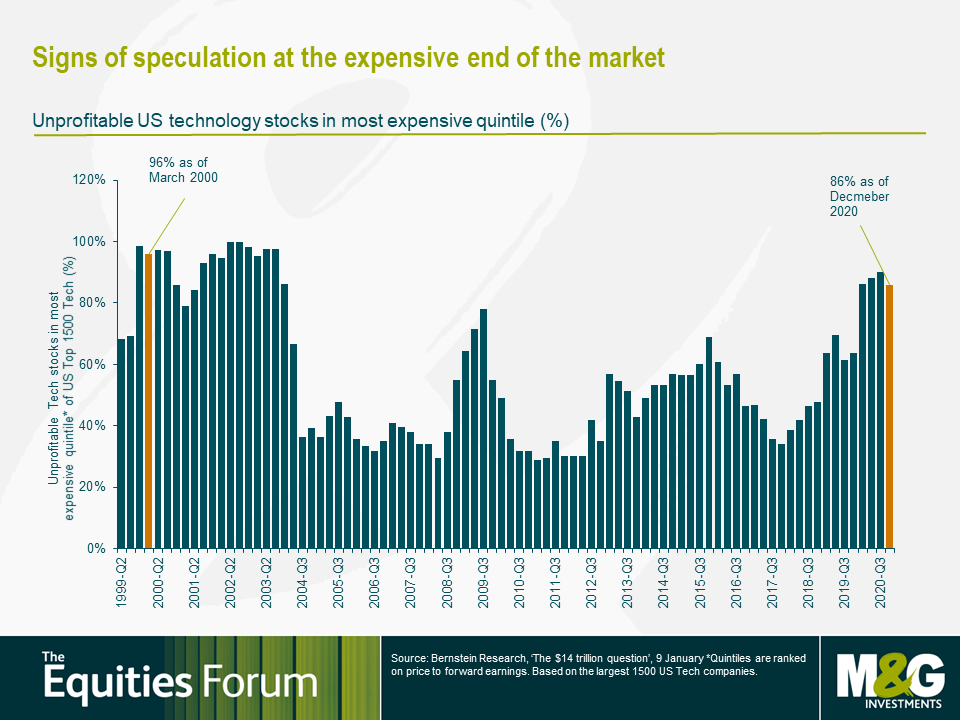 There is also a wide amount of speculation occurring at the expensive end of the wider market, with trading volumes spiking. Trading in high-multiple stocks is approaching the levels seen back in 1999. On that metric, we are at roughly two-thirds of what we saw at the peak of the ‘dot-com bubble’.[4]

Last, but certainly not the least, is the much wider retail participation in this speculation. Around 9% of NYSE volumes are now due to small trader call buying (i.e. retail traders). This number is 3x what we saw at the peak of the ‘dot-com bubble’.[5]

We’ve seen Tesla’s share price soar in 2020, with the stock up more than 800% since the beginning of last year. It’s now the ‘bricks and mortar’ gaming software and hardware retailer GameStop (GME) in the spotlight, after retail investors (collaborating via Reddit) squeezed strong short interest on the stock – driving up the share price by more than 1300% year-to-date. In my career to date, I have never encountered a situation where retail traders have banded together to put a squeeze on a substantial short position.

At one point, the amount of trading in GME (by value) exceeded that in Apple, a business with a market cap of 2+ trillion. While GME is the poster child, this is happening across many stocks. Since November 2020, the share prices of a number of most-shorted stocks have skyrocketed[6].

In addition, there are signs of ‘herd behaviour’. When ARK Invest, a Thematic Active-ETF long-only investment manager, announced they took a US$26 million stake in Skillz, the stock jumped by around US$1 billion in value. The assets in the ARK Innovation Active-ETF have grown 10x over the past year, from around $2 billion at the beginning of 2020 to US$23 billion now[7].

Of course, evidencing signs of speculation wouldn’t be complete without mentioning Special Purpose Acquisition Companies (SPACs). Last year, SPAC volumes almost caught up with traditional IPOs in the US.

These can be particularly risky vehicles because, unlike in an Initial Public Offering (IPO) where a company is not allowed to make forecasts in their S-1 company registration statement, in a SPAC – because it is a reverse merger – the acquired business is allowed to share longer-term forecasts, say to 2024 or even 2030.

This is important because, in my view, it raises risk of misallocation of capital. While it would be inaccurate to say all SPACs are fraudulent, a good deal have been shown to be just that. Loose regulations enable them to suggest forecasts or a level of competence that, often times, don’t exist in practice.

Do we have the ingredients for a bubble?

In my view, a bubble needs three ingredients – high valuations in the broader market, widespread optimism and outright speculation.

While valuations are extended, they are not in outright bubble territory when we compare them to 1999. Moreover, I believe it is ‘wider market’ valuations that determine if we are in bubble territory, not those of a narrow band of winners. I would argue the top five market cap constituents of the S&P 500 Index today are better quality than the top five in 2000. As such, I would look at the rest of the market for peaking valuations to spot a bubble. The analysis suggests that for the wider market, we are at 3.4% FCF yield versus 2.3% in 1999.[8] Some may argue that the relative valuation of equities compared to the US 10-year treasury yield matters. Such a comparison to cost of capital (1% today versus 6% in 1999) would support even higher valuations, so it is challenging to call a bubble today based on valuation alone.

Optimism canoccur at the peak of the cycle. Investors’ time horizons tend to extend and they are willing to buy ‘stories’ (rather than bringing a critical eye), and assign a fairly high probability of success on the back of hype. This is what happened with Pets.com back in the ‘dot-com bubble’. Investors started believing everything would go online. With the perspective of this historic narrative, today doesn’t seem terribly different. Look at the numbers of SPACs on Electric Vehicles[9], or even just the volume of listings via SPACs – today SPACs represent half of total listings in the US by volume[10]. That opens up a huge potential for misallocation of capital. Look at the percentage of non-profitable businesses in the earlier-mentioned, high-valuation quintile (86% now versus 96% in March 2000). We are nearing the 2000 levels as ‘optimism’ drives up the valuations of these unprofitable businesses.

Speculation can happen when the investor composition of the market changes. An increasing share of market participants is made up of investors who have not invested through a recession (or perhaps have shorter-term memories!). Free trading applications in the US, such as Robinhood, and the wider adoption of other ‘no-fee’ platforms has accelerated on the back of the COVID-19 crisis. The increased use of these portals combined with stimulus cheques propping up disposable incomes, along with a 10-year bull market, have provided the ingredients for a potential ramp up in speculative trading.

The future is rarely predictable, so be selective in the present

While we cannot call this a ‘bubble’ on valuation grounds alone, we can observe widespread optimism and speculation that is typically seen in the latter phases of a bubble. Yet, timing the peak impossible. In my view, the tech sector still provides a reasonable place to find attractive opportunities today.

Many of these businesses are exposed to structural, long-term growth trends and they have stronger business models with higher ‘moats’ than tech businesses have historically displayed.

These collective factors provide much greater fundamental support to valuations in the tech sector today. Of course, given a growing amount of optimism and speculation, it is more important than ever to be an active investor. Stock selection matters, to distinguish between a ‘real’ tech business and a ‘marketed’ tech business.

As Benjamin Graham is often quoted as having said: “In the short run, the market is a voting machine but in the long-run, it is a weighing machine”.