The last four weeks have seen the most deliberately belligerent rate stance from officials since 1994. Yet, during those same weeks the 2-year note, the Treasury security most sensitive to alternative policy rates, has largely dismissed all that. Why?

There was still another scramble for collateral yet again this morning. Nowhere near the intensity and duration of yesterday’s more massive flux, still it was obvious enough even if of the less egregious kind to only stick around for a little over an hour.

Beginning at the European open (a place where recession signals are outright compounding), the 4-week bill rate – already ridiculously low – was pushed down as collateral scarcity forced even higher premiums paid on this most pristine variety.

The first immediately below is from today; the one underneath it, yesterday.

These aren’t just historical oddities to marvel over and wow at for some academic sake. These things are cumulative; repo participants have very long memories even if those at the Federal Reserve would prefer the short public attention span. Should you ever experience the misfortunate of being on the wrong end of a scramble, wondering if you’ll make it through the morning without being carried out on a stretcher, as the saying goes, you’re going to change the way you trade and behave for regardless of the outcome.

A little less cavalier and willing to take risks.

And the counterparty on the other side, too, who knows what’s up – beside bill prices – as these mornings of chaos unfold. The cash lenders who have to pick up the phone to call their borrowers for these collateral calls demanding more collateral, or just good collateral, they’re taking the names of every borrower who figuratively keeps them on hold quite obviously unable to easily and immediately post it.

The entire system adjusts as these spasms occur. The more frequently, and the more serious, the more you should expect further future adjustments likely collateral calls, more scarcity, then a shortage, perhaps another run. Risk aversion. Contraction of the collateral multiplier, more than what’s already been indicated thus far during Euro$ #5. 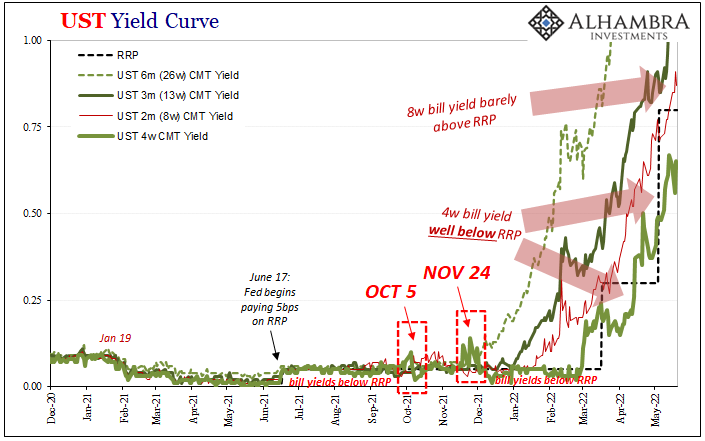 It seems to be taking its toll on the whole marketplace, even where rate hikes are meant to be most deliberate and deliverable.

Before, up to around late April, the Fed was in charge; at least, the Fed’s ability to influence the front end of the yield curve had gone unimpeded at the front. Jay Powell said aggressive rate hikes, the front end obliged with short-term rates – especially the 2-year note yield – rising quickly.

This ran into trouble in March but only from the back end; the result was inversion across much of the curve. While in and out since, the situation there remains; the 7s10s, for example, apart from two days, has been constantly inverted while the 5s10s in then out and now back in again yesterday and today. 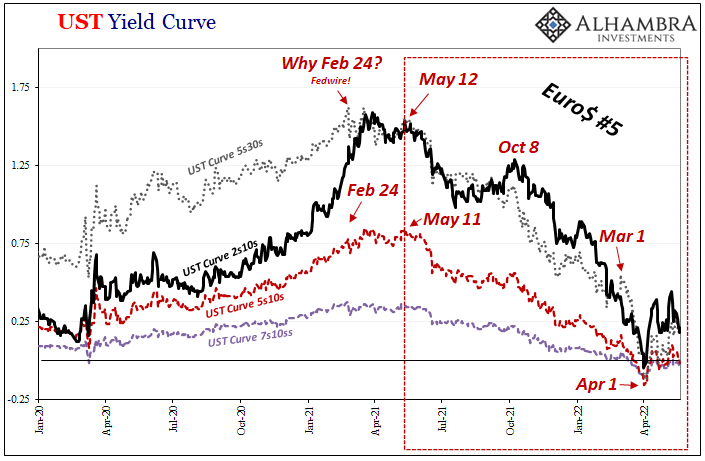 n other words, as far as the long end of the curve is considered, nothing much has changed since inversion first began (or when flattening first began at the start of Euro$ #5 nearly a year ago; growth/inflation prospects have never looked sustainable).

For this consistent skepticism at the far end, it wasn’t so and something may have changed at the front end. Dating back to around April 22, now the short-term rates like the all-important 2s aren’t doing much of anything anymore. Lack of additional movement has added up to just about an entire month of sideways.

And what a month for the 2s to be trading sideways; the same as when the Fed actually did its first 50 bps hike in twenty years; the FOMC was very clear that policymakers uniformly intend for each additional rate hike to be similarly double, meaning fifties; and just recently Chairman Powell delivered his “pain” remark strongly indicating the committee’s resolve to keep on hiking at this 50 bps pace regardless of anything but their view on “inflation.”

The last four weeks have seen the most deliberately belligerent rate stance from officials since 1994. 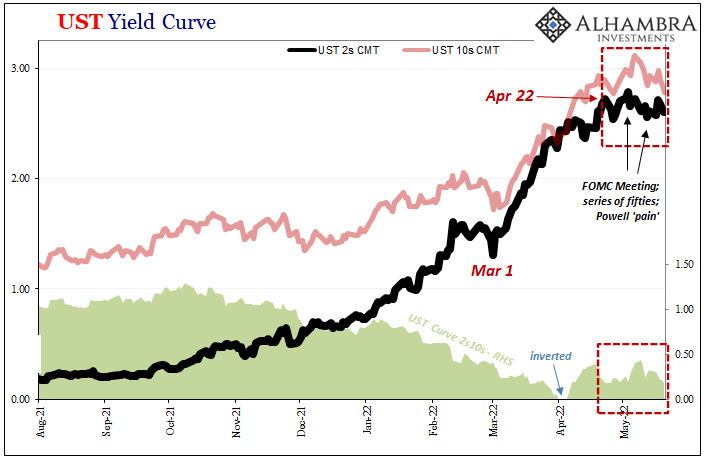 Yet, during those same weeks the 2-year note, the Treasury security most sensitive to alternative policy rates, has largely dismissed all that.

For one, inversion has been here to stay, a powerful rebuke of the entire reasoning behind Jay Powell’s rate hikes. The more inversion sticks, the more the short end is going to have to balance that rebuke against these FOMC people who always and everywhere prove to get it wrong.

On top of that, yes, collateral. The more we have desperate collateral problems, the more it is going to impact financial and economic conditions (market volatility and chaos, if you haven’t noticed). Genuinely deflationary money when inflation is said to be the biggest risk by those who have no clue about the monetary the long list of clueless, of course, central bankers right on top of it).

The more powerful deflationary money signals, the less reason for the 2s to trade on the FOMC. Basically, the entire eurodollar futures inversion. 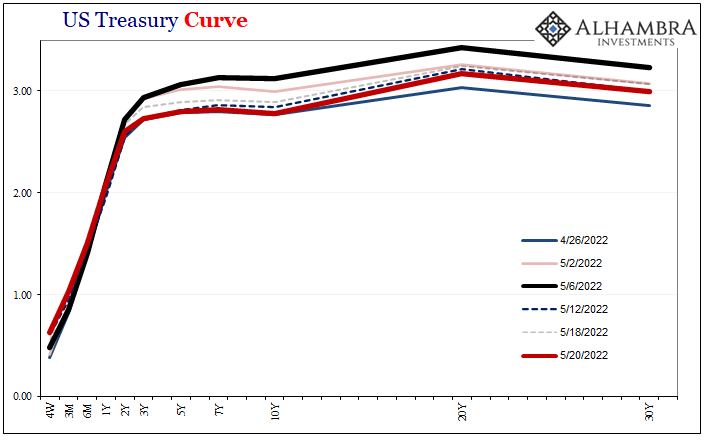 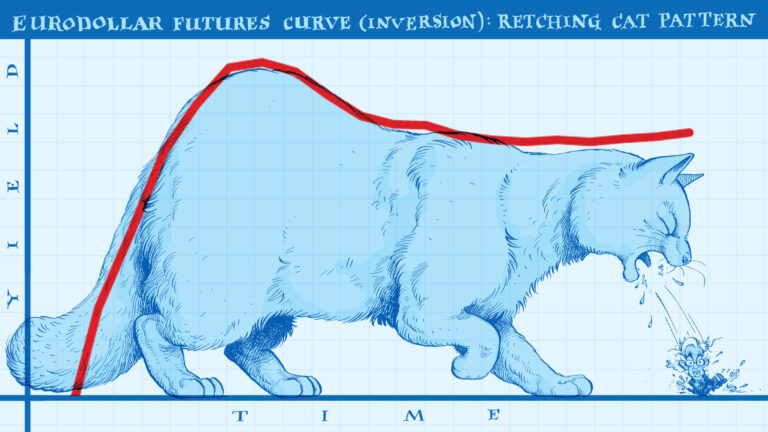 Then there’s a building consensus as to recession risks among the public and other markets which mostly refuse to ever countenance the possibility apart from when the possibility becomes too serious and evident to ignore as usual. That along with deflationary money go hand in hand in tipping the focus of the entire short end of the yield curve out of the Fed’s perverse influence and into reality.

It’s been nearly a month for the short end, and a couple weeks (since the May 6 top) at the long end.

Things could always change, short run fluctuations are impossible to predict, but, given incoming data and the plethora of other market signals – especially the US$’s “incredible” surge – only two rate hikes in and it’s not looking good for them.

The 2s aren’t even buying it right now. Instead, they, like 4-week bills, are being bought for something else.

Unfortunately, this would mean it isn’t looking good for anyone. Powell was absolutely right, if, as always, for the wrong reasons. There is almost certainly pain ahead. And should the 2s begin to actually descend, immediately ahead.