"In reality, the bull market of the 1920s had more of an impact upon utility stocks and bank stocks than it did on industrial and railroad stocks."
Dr. Brian Taylor
Global Financial Data, June 3, 2017

When people talk about the stock market crash of 1929 and the 90% decline in U.S. stocks between 1929 and 1933, most of the focus of this rollercoaster ride falls on the industrial stocks, such as Radio Corporation of America, and others that flew high before collapsing after October 1929.

In reality, the bull market of the 1920s had more of an impact upon utility stocks and bank stocks than it did on industrial and railroad stocks.  This is illustrated in the chart below that shows the path of railroad, industrial, utility and banking stocks between 1923 and 1933.  Although few realize it, the real bubble in 1929 occurred in bank stocks, especially the money center bank and trust companies located in New York City.  Between 1923 and 1929, railroad stocks doubled in price, industrial stocks quadrupled in price, utility stocks increased six-fold and bank stocks increased ten-fold in price.

It is important to remember that it was in 1929 that Dow Jones introduced their utility average. Utility stocks participated in the bull market for two reasons, leverage and a merger mania.  Throughout the 1920s, utility stocks were consolidating at a furious pace.  Before the 1800s, each city had its own utilities for electricity, gas, water and street railways.  During the 1910s and 1920s, not only did all the utilities of a given city often consolidate into a single utility, but utility holding companies began acquiring utilities in different cities.  Holding companies, as opposed to operating companies, could use leverage to acquire more and more utilities and operate across state lines, creating large companies whose profits grew rapidly.  Samuel Insull epitomized this behavior as he consolidated utilities in Chicago and the surrounding area creating a utility empire which eventually collapsed in the 1930s.

Banks were in a similar situation.  There were thousands of state and national banks spread throughout the country.  When the NYSE was founded in 1792, the most important stock in the country was the Bank of the United States which Alexander Hamilton had created.  Until the 1840s, banks represented the largest sector on the New York Stock exchange, but in the1840s railroads eclipsed banks in size and after the Civil War, railroads dominated the exchange so much that banks were delisted from the Exchange in 1873. For the next 54 years, no bank stock was listed on the NYSE.

Bank stocks continued to trade over-the-counter, but the market for bank stocks was limited to local brokers.  New York bank stocks traded in New York, Boston bank stocks in Boston and Philadelphia banks traded in Philadelphia. However, banks were not listed on an exchange that allowed them to be traded throughout the country as the railroads were.

Until the 1920s, the primary assets of banks were small business loans. In the 1920s, banks began emulating department stores and went after individuals, offering their customers every type of service possible including personal installment loans, mortgage lending, and providing safe deposit boxes and trust departments. In addition to this, banks began underwriting securities, making loans on shares and provided margin lending for investors. Until the 1920s, unit banking, only allowing one location for any bank, was the law of the land, but in the 1920s some states, such as New York, began allowing branch banking and California allowed statewide banking.  Thus, banks were encouraged to take over other banks.

State banks could only operate within a single state and nationally chartered banks could only have one branch. When states began allowing state chartered banks to have branches, this put national banks at a disadvantage until the McFadden Act was passed on February 27, 1927 which put state and national banks on an equal footing.  National banks located in states that allowed branching were also allowed to open branches.   In exchange for this concession, national banks were not allowed to operate across state lines until the 1980s, though bank holding companies were granted this right in the 1950s.

As a result, a merger frenzy occurred in the 1920s in which banks consolidated with other banks.  Most banks were acquired with new shares, not with cash. Since it was easier to issue new shares than spend cash, bank stock prices started to rise rapidly. As the bull market pressed on, speculators borrowed money to purchase more shares and this helped to increase bank profits making the acquisition of other banks even more attractive.  A virtuous circle of higher bank profits, more lending and rising bank stock prices from acquisitions created a banking bubble which could only end with a crash.

On September 19, 1927, the NYSE allowed bank stocks to list and trade on the floor of the NYSE for the first time in 54 years, moving the banks out of the Department of Unlisted Securities. A dozen banks, including the Chemical National Bank, Bank of Manhattan and First National Bank listed on the NYSE, though all of them had delisted by 1930.

Bank stocks traded at incredible prices until a wave of stock splits in 1929 brought shares back to earth. Sixteen New York City bank or trust stocks traded at over $1000 in 1929, and shares in the First National Bank of New York, which had already had a five-for-one stock dividend in 1901, traded at $8200 in September 1929. By contrast, average per capita annual income in the United States in 1929 was only $750.

Bank stocks led the way in the bull market of the 1920s; however, this fact has been ignored because most bank stocks traded over-the-counter in the 1920s and there was no daily index of bank stocks that traders could keep track of. Since bank stocks and shares in trust companies were not listed on the NYSE and did not trade on a daily basis, only bid and ask prices were available for many of the companies.  Moreover, bid and ask prices were only published on a weekly basis, so calculating a daily index was just not possible.

Nevertheless, Standard Statistics calculated a weekly index of money center (i.e. New York) bank stocks.  Moody’s started calculating a monthly index of Bank Stocks in 1929, at the height of the bubble, as well as an index of bank yields. In September 1929, as a result of the bubble, banks stocks had an average dividend yield of only 1.35%.

The bigger they are, the harder they fall.  Thousands of smaller banks went bankrupt in the 1930s and even shares in the larger banks fell by 90% or more in the next four years.  The Banking Act of 1933 (Glass-Steagall) left banks heavily regulated until the 1980s. Regulation limited the profits of the banks and it took decades for them to recover.  Even in 1985, S&P’s Money Center Stock Index was still below its 1929 peak, a level the Dow Jones Industrial Average had passed in 1954. 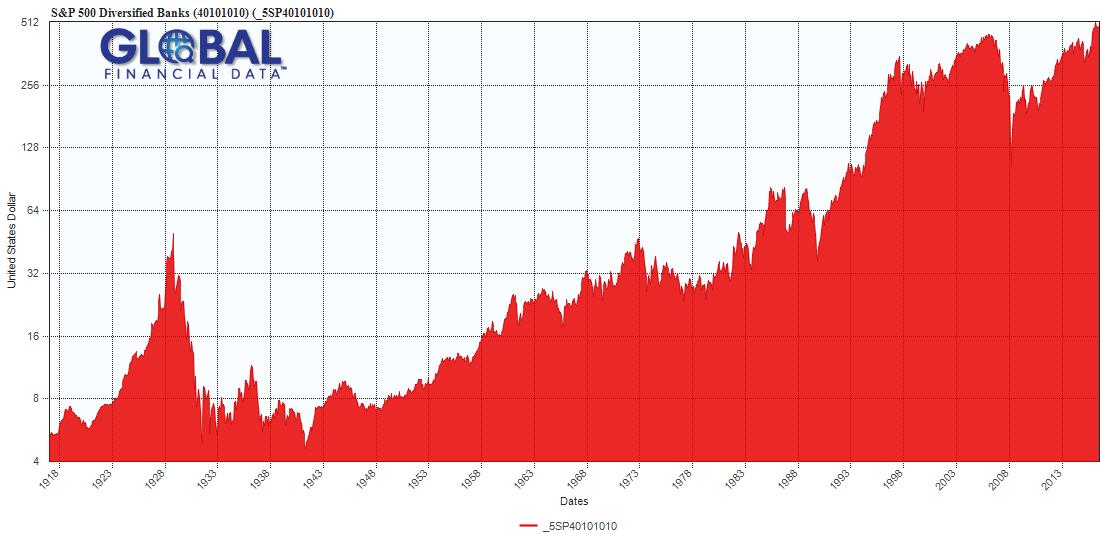 Bank stocks began to list once again on the NYSE in the 1960s and in 1976, S&P began including bank stocks in the S&P 500 for the first time.  Few people realize that the S&P 500 completely excluded financial stocks before July 1976. 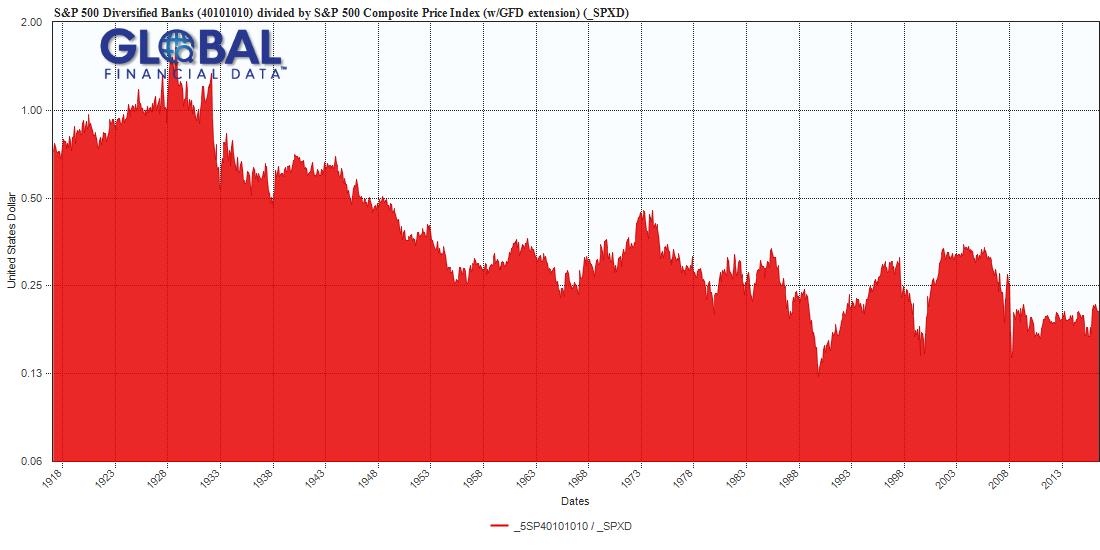 No doubt, the introduction of the Glass-Steagall Act in 1933 which regulated banks, forcing them to separate into deposit and investment banking, the enforcement of Regulation Q, which limited how much banks could pay in interest until the 1980s, the continued impact of the McFadden Act, which kept most banks from operating across state lines until the 1980s, the persistence of unit banking, which kept banks from having more than one location in some states,  and other government regulations designed to avoid the massive bankruptcies of the 1930s also limited the profitability of banks, and thus, the return to shareholders.

The Underperformance of American Shares

This means that any measures of returns to shareholders before 1976 which rely upon the S&P 500 or the Dow Jones Average overestimate historical returns to all investors because banks and insurance companies were excluded from the stock market indices that were calculated and used as benchmarks for the market.  Researchers who have looked at the relative performance of stocks in the United States to other countries have pointed out that American shares have outperformed shares in other countries.  Although the exclusion of financial stocks from American stock indices isn’t the sole cause of these differences, it certainly is a contributing factor.