The Netherlands has more stock market history than any other country. Trading in shares of the East India Company began trading in Amsterdam in 1601 and continued to trade until the company went bankrupt in 1794.
Dr. Brian Taylor, Chief Economist
Global Financial Data, December 21, 2022

Before World War II, colonial stocks listed on the stock exchanges of the mother country.  Stocks of the British Empire, such as South Africa, Australia and New Zealand, listed in London, stocks from French Indochina and French West Africa listed in Paris, stocks for the Belgian Congo listed in Brussels and stocks for the Netherlands Indies listed in Amsterdam.

Most non-European countries went to London to raise capital for local banks and railroads in the 1800s.  This included not only the British Empire, but most of South America.  Russian companies went to either Berlin or Paris and most eastern European countries went to Berlin.  Frans Buelens and Stefaan Marysse provided a good analysis of Belgian Congo stocks in their article, “Returns on Investments during the Colonial Era: The Case of Congo.” They found that Congo stocks provided a greater return with greater volatility than Belgian stocks. Some of the larger companies listed in multiple exchanges, such as Paris and London for the Suez Canal.  Nevertheless, it would be beneficial to look at other countries and see what happened.

One country that hasn’t been explored is the Netherlands and their colony, the Netherlands Indies (Indonesia).  The Netherlands has more stock market history than any other country.  Trading in shares of the East India Company began trading in Amsterdam in 1601 and continued to trade until the company went bankrupt in 1794.  After the Vereenigde Oost-Indische Compagnie (VOC) issued its shares in 1601, the company issued new debt, but not new equity.  In 1794, the company collapsed under the weight of its debt and went bankrupt.  Both the French East India Co. and the Dutch East India Co. went bankrupt or were closed down in the 1790s.  There was no trading in equities in either Paris or Amsterdam during the late 1790s.

The Banque de France was founded in 1800, De Nederlandsche Bank in 1813 and the Oesterreichische Nationalbank in 1816.  During the Napoleonic Wars, both France and the Netherlands defaulted on their government debt and replaced existing debt with new debt.  Any history of equities in France or the Netherlands has a gap during the Napoleonic Wars just as countries in eastern Europe have gaps between World War II and the 1990s.

No French equities were traded in Paris between 1793 and 1800 and no Dutch companies were traded in Amsterdam between 1794 and 1816. De Nederlandsche Bank was established in 1814 and the Nederlandsche Handel-Maatschappij was established in 1824 to oversee the Netherlands trade with the Netherlands Indies. GFD has collected data on stocks that traded in Amsterdam from the founding of the Nederlands Bank in 1816 to the present and put together indices of stocks’ performance in both the Netherlands and the Netherlands Indices.  In addition to this, we have collected data on Dutch government bonds back to the 1788 and on cash back to 1813.  The only other countries for which comparable long-term data are available for stocks, bond and bills are the United Kingdom, the United States, France and Austria.

Netherlands Shares Before the Napoleonic Wars

If you look at Figure 1, you see an index of Dutch shres between 1601 and 1794.  The index rose steadily during the 1600s as the dividends paid by the Dutch East India Co. and the price of the stock rose.  The stock peaked during the bubble in 1720 that affected not only French and English stocks, but Dutch stocks as well.  During the rest of the eighteenth century, the VOC issued more debt, but not more equity.  Profits from the Dutch East India Co. declined and the company issued more debt until the debt load became unbearable and the company collapsed into bankruptcy.

The yield on Dutch bonds 1400 to 2022 is illustrated in Figure 2.  There was a steady decline between 1400 and 1700 when bond yields began to stabilize. There is very little data on bond prices during the 1700s, but for the most part, bond prices for the 2.5% bonds stayed around par.  The Netherlands went into default after France conquered the Netherlands.  Existing bonds were converted into new bonds in 1814 with investors receiving 1/3 new bond for each old bond.  The 2.5% yield acted as a floor on bond yields with prices usually lower than par.  Yields declined during the 1800s, rose after World War I, declined again until the 1940s, then followed the interest rate pyramid, rising from the 1940s to the 1980s and then declining to negative yields by 2020. Historically, the Netherlands has had low inflation and low bond yields.  The Netherlands and Switzerland are the only two countries whose currency depreciated less than the United States Dollar since the onset of World War I.

In their paper on Belgian and Belgian Congo securities, Buelens and Marysse showed that the colonial securities were more volatile than the domestic securities, but also provided a significantly higher return.   The same was true for the Netherlands.  Figure 4 compares the relative performance of stocks that served the domestic Dutch market and stocks that operated in the Dutch East Indies.  Dutch East India stocks were the clear outperformers, although the difference is not as significant as in the Belgian case.  In both cases, investors faced higher risk in colonial stocks and were rewarded for taking on those risks.

The largest company in the Netherlands Indies was Nederlandsche Handel-Maatschappij which was established in 1824 as the successor to the VOC and financed trade and shipping between the Netherlands Indies and the Netherlands. The company was nationalized by Indonesia in 1960 and in 1964 the company acquired De Twentsche Bank to form Algemene Bank Nederland which merged with AMRO Bank in 1991 to become ABN-AMRO, The company did well until the 1929 stock market crash from which it never recovered.  The company’s performance from its founding in 1824 until Indonesia became independent is illustrated in Figure 5.

The other company that dominated the Amsterdam stock exchange and was based in the Netherlands Indies was Royal Dutch Petroleum (Koninklijke Nederlandsche Maatschappij tot Exploitie van Petroleumbronnen in Nederlandsche Indie), founded in 1890. Royal Dutch merged with The Shell Transport and Trading Co. of the United Kingdom, founded in 1897 in June 1907. The two companies had a dual listing, but acted as a partnership with Royal Dutch controlling 60% of the company and Shell controlling 40%. The Dutch company was in charge of production and manufacture and the British company directed the transport and storage of products.  The two companies were unified in 2005 as Royal Dutch Shell plc. Because of the large market capitalization of Royal Dutch Petroleum, it is excluded from the index of Netherlands Indies stock.

After World War II, the Netherlands Indies gained its independence as Indonesia.  No stock exchange existed in Indonesia until 1977.  Nevertheless, several large international companies, Royal Dutch Shell, AKZO, Philips and Unilever traded on the Amsterdam exchange and dominated the exchange by capitalization.  The exchange kept a separate index for the international companies, which traded in London and New York, and their performance relative to the rest of the market is shown in Figure 6. 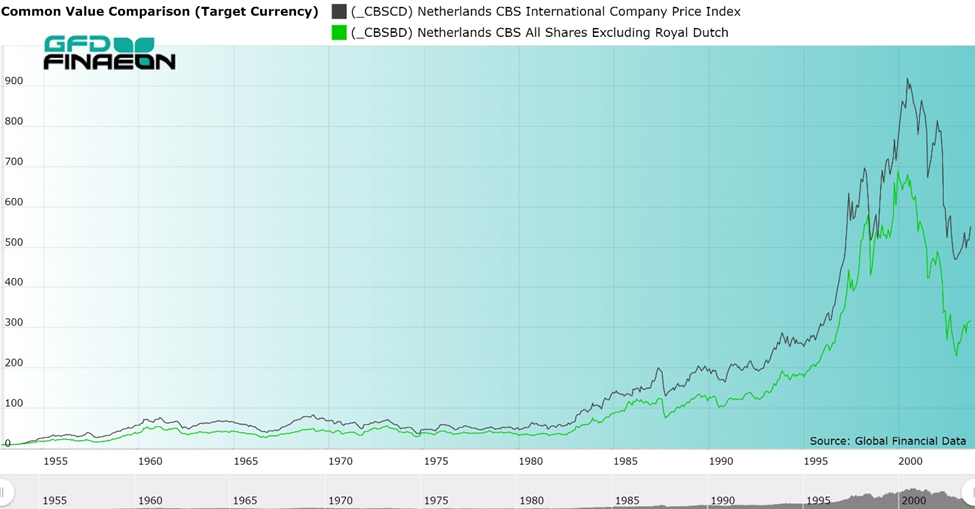 Because there was a gap in the listing of equities on the Amsterdam Stock Exchange between 1794 and 1816, we have to divide the data on returns into two groups, before 1795 and after 1815.  We further want to compare the returns to Dutch and to Dutch indies stocks.

Before 1795, there were only two stocks for which we have price data and dividends that will enable us to calculate total returns, the Dutch East India Co. and the Dutch West India Co.  The returns are summarized in Table 1.  Between 1602 and 1719, investors received an annual return of 6.93% with 1.4% coming from price increases and 5.45% from reinvested dividends.  However, prices declined from 1719 to 1794 with both companies eventually going bankrupt.  Between 1602 and 1794, there was an annual loss in terms of price, though the dividends offset the decline in prices.

We have 205 years of data for the Netherlands from 1816 to 2021.  Only the United Kingdom, the United States, France and Austria have comparable histories for stocks bonds and bills.

The Netherlands has had an unusual equity history with its colony, the Netherlands Indies, now Indonesia, playing an important role in its history.  The three companies that traded in Amsterdam prior to the Napoleonic Wars, the Dutch East India Co. in the Netherlands Indies, the Dutch West India Co. in the Americas and the Society of Berbice (in Guyana) were all colonial companies.  All eventually went bankrupt and by 1794, no equities were traded in Amsterdam. This remained true for the next 22 years.

The Netherlands has always had a large international component to its stock market.  Since the 1600s, the Netherlands has had more domestic capital to invest than opportunities that were available domestically. This is why Amsterdam became the financial center of Europe in the 1600s and had the most advanced economy until England took over that role in the 1700s.  Dutch bonds have consistently paid low yields because of the lack of risk of default.  The only default came during the Batavian Republic when France occupied the Netherlands. Consequently, stocks have provided high returns because of the opportunities that Dutch investors have had to invest abroad if no domestic opportunities were available.

The Dutch had a long history of investing abroad.  Before the Napoleonic wars, the Netherlands was investing in bonds of other European countries, and the Netherlands invested in the United States during and after the Revolutionary War, and funded the development of American railroads.

The Netherlands Indies gave Dutch investors hundreds of companies to invest in before World War II with returns that exceeded what they could earn in the Netherlands.  Although the premium for investing in Dutch colonies was not as great as Belgian investors received for investing in the Belgian Congo, there still was a premium.  This was the reward to investors for taking on greater risk by investing abroad.  Dutch investments gave birth to one of the oil giants, Royal Dutch Shell, which began drilling for oil in the Netherlands Indies and eventually spread throughout the entire world.

Frans Buelens and Stefaan Marysse provided a good analysis of Belgian Congo stocks in their article, “Returns on Investments during the Colonial Era: The Case of Congo.”