How People Earn and Use Money: Vibrant Vintage Illustrations from 1968

"...far from a mere educational tool, the vibrant vintage primary-color illustrations (...) capture both the era’s characteristic biases and the naiveté of an overly simplistic view of the market economy — from the gender stereotypes dictating what types of jobs are appropriate for men and women to the blind faith in banks that seems in retrospect a caricature of the recent global recession to the tragic conditioning that work for money alone is the only kind of work."
Maria Popova Brain Pickings, December 2012

Maria Popova has uncovered this wonderful book of illustrations on the subject of "money" from a different era:

"With the fiscal cliff towering over the mainstream media, one has to wonder how America cultivated its relationship with money and the economic mindset that got us where we are today. In 1968, at the peak of “the century of the self” and the consumerism of the Mad Men era, while Alan Watts was busy bringing Eastern philosophy to the West and trying to convince Americans to seek purpose beyond money, a primary school supplement titled How People Earn and Use Money (UK; public library) — from the same Social Studies Program series that gave us How People Live in the Suburbs and How We Use Maps and Globes — set out to explain to children the basics of economic theory and its implications for everyday life."

Here are just two illustrations, but we highly recommend you to visit BrainPickings.org for a more complete list of these delightful images. 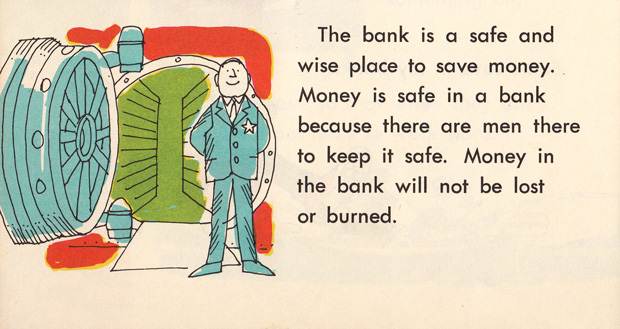