Although deflationary winds are a risk in the developed world, they have yet to become embedded in expectations.
Scott A. Mather
PIMCO, Viewpoints, August 2012

Ballooning fiscal deficits, record low interest rates, depressing economic growth, private sector deleveraging, uncoordinated and ineffective governmental responses and monetary authorities increasingly exhausted and reluctant to act. Over the past two decades, people would have associated this characterization with Japan. However, more recently, they are accurate descriptions of the status quo in many other developed countries, raising the question: is the developed world becoming “Japanified? 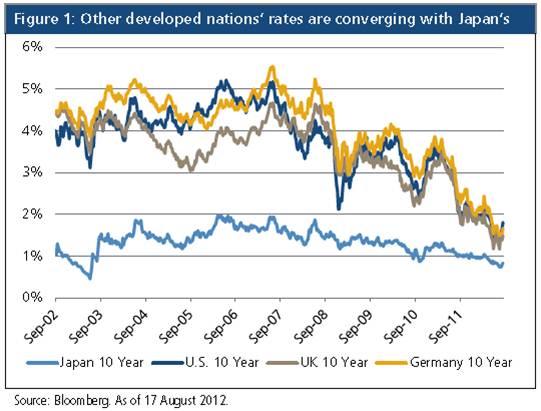 Japan has lived through lost decades while the rest of the developed world is suffering through only the fourth or fifth year of stagnation. Since the debate is relatively nascent it has so far focused mainly on superficial similarities, namely the converging level of interest rates (see Figure 1) and deteriorating demographics, especially the retirement of the baby boomer generation in the U.S. The Japanese experience, however, is a well-known movie without a happy ending that is fresh in policymakers’ and investors’ minds: it was hoped that a path similar to Japan’s could be avoided.

At the beginning of the crisis, most economists thought the severe economic and social costs of full “Japanification” could be averted if the crisis response was radical and quick enough. And at first, it appeared to be working. Growth rebounded in 2009 and 2010 (albeit weaker than historical experience) and deflation was avoided. The optimists believed that policymakers, armed with the lessons of Japan’s history and studies of debt deflation, deleveraging and balance sheet recession dynamics during the Great Depression, would be able to avoid anything reminiscent of such a stark outcome. Increasingly, however, it appears that the developed world is repeating the same mistakes, in particular through political paralysis and hesitance to fully engage central bank balance sheets. Even in the U.S., where Fed Chairman Bernanke had studied extensively and published scholarly works on mistakes made during the Great Depression and lectured Japanese policymakers in the early 2000s on ways to break free, we are seeing increasing frustration and reluctance to continue policy activism in the face of the inability to restore employment and economic growth to the pre-crisis trend.

It is therefore fair to question whether a Japanese outcome can even be avoided. Undoubtedly, fiscal and monetary policy actions are facing diminishing marginal returns. But is it time for policymakers to give up and resign the U.S. and Europe to full “Japanification,” with decades of low growth and seemingly inescapable deflationary debt traps ahead?

We think it is not too late to act. Optimists point to many real differences between the experience of Japan and the current state of the developed world, most prominently inflation and deflation dynamics and real interest rates. In Japan’s case, deflationary expectations became embedded in the economy early in the crisis period, preventing real short-term rates from remaining negative and thereby clogging monetary transmission further (see Figure 2). Although deflationary winds are a risk in the developed world, in particular in countries undergoing pronounced deleveraging (e.g., Spain), they have yet to become embedded in expectations. This is a very important advantage because deflationary conditions dramatically worsen debt dynamics by increasing the real debt burden. This prevents negative real rates from offsetting the weaker demand due to deleveraging and necessitates stronger counter-actions by central bankers even as their willingness to respond has been weakened. But why did the onset of deflationary expectations come so quickly in Japan and is this a risk for the rest of the developed world? 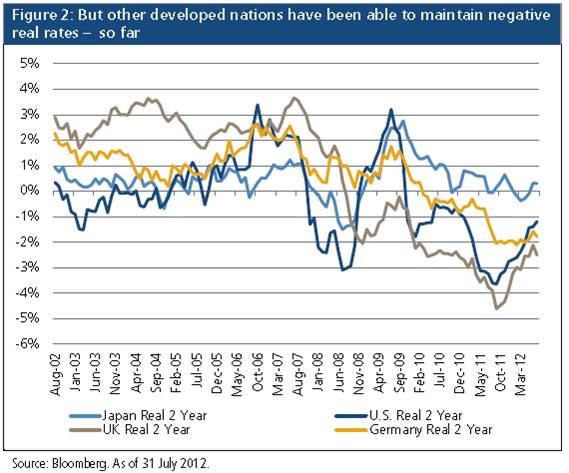 One of the chief explanations for the outbreak of deflation in Japan was the difference in the structure of the labor market. The working age population in Japan began to shrink in the mid-1990s, leading to lower expectations for future GDP growth and shifting the focus on future costs of age-related spending. In addition, Japan made every effort to limit employment losses, even as activity slowed. As a consequence, unemployment did not rise as fast as in developed countries during the onset of the current financial crisis. And while the merits of attempting to maintain full employment are admirable from a social perspective, something had to give. In Japan’s case, it was the level of nominal wages, which quickly began to fall (Figure 3). Combined with the tepid response from the BOJ, this is perhaps the best explanation for why deflation set in so quickly in Japan.

In contrast, the response of most of the developed world’s labor markets has been quite different. As economic slack rose, employment was aggressively cut while wages slowly increased. In addition, although working age population growth is slowing in many countries, it is not falling as quickly as it did in Japan. This has helped forestall the onset of deflationary expectations. That does not mean the developed world is without risk of wage deflation. A close inspection of wages in many countries reveals that wage growth is beginning to fall from levels that were already only slightly positive (Figure 4). In addition, inflation is already low and falling in many countries with structural inflationary pressures low due to high unemployment, large output gaps and low capacity utilization. In the absence of continued policy support, another economic shock or simply a longer period of malaise may be all that is necessary for wage levels to drop. If this were to happen, the difficult job of policymakers would get even more difficult and the economic environment could resemble Japan in more ways than just the converging level of interest rates. 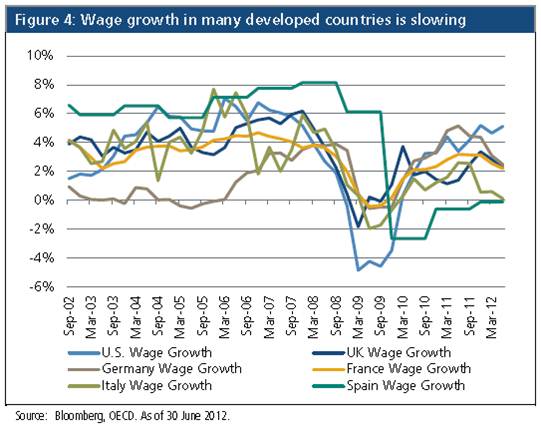 While the developed world’s “Japanification” is by no means complete, as positive inflation expectations and negative real rates allow for a relatively orderly deleveraging in many developed nations, disappointingly low growth rates persist. And, policymakers are falling behind the curve and the risks of deflation are rising. Bold leadership, continued monetary accommodation and a comprehensive pro-growth attack on structural problems will be needed to avoid prolonging this period of economic stagnation even further. Otherwise, the same dark forces that Japan has been battling will continue to infect the developed world. In the meantime, invest for capital preservation and position for a low growth environment. Until bolder steps are taken, bank on low yields for as far as the eye can see.

Mr. Mather is a managing director in the Newport Beach office and head of global portfolio management. Previously, he led portfolio management in Europe, managed euro and pan-European portfolios and worked closely with many Allianz-related companies. He also served as a managing director of Allianz Global Investors KAG. Prior to these roles, Mr. Mather co-headed PIMCO's mortgage- and asset-backed securities team. Prior to joining PIMCO in 1998, he was a fixed income trader specializing in mortgage-backed securities at Goldman Sachs in New York. He has 18 years of investment experience and holds a master's degree in engineering, as well as undergraduate degrees, from the University of Pennsylvania

Past performance is not a guarantee or a reliable indicator of future results. All investments contain risk and may lose value. This material contains the opinions of the author but not necessarily those of PIMCO and such opinions are subject to change without notice. This material has been distributed for informational purposes only and should not be considered as investment advice or a recommendation of any particular security, strategy or investment product. Information contained herein has been obtained from sources believed to be reliable, but not guaranteed. No part of this material may be reproduced in any form, or referred to in any other publication, without express written permission. ©2012, PIMCO.