Will Japan join the tightening party?

The inflation narrative in Japan is shifting to focus on upside risk. Portfolio manager Ales Koutny considers whether Japan could join other developed market peers in the exit from accommodative policy.

The hawkish rhetoric from DM central banks continued to gather steam in early February and broadly synchronised moves towards tightening conditions across the board are being considered as policy makers’ focus shifts from recovery to inflation. Even Europe has seen rate hike expectations move forward – with markets pricing a return to 0% by the end of the year from the current -0.50%1 – as stimulus requirements and inflation pressures are finely balanced. Japan faces a similar conundrum as its economy continues to warrant further stimulus to aid its post-pandemic recovery, but inflation is ticking up. For the first time since 2014, the Bank of Japan (BoJ) has classified price risks as “generally balanced”, rather than being “skewed to the downside”, in its January meeting. It upgraded its GDP growth forecasts for this year from 2.9% to 3.8% and core inflation expectations from 0.9% to 1.1%. Some markets participants are starting to anticipate Japan could join other DM peers in stepping back from its accommodative policy.

Looking underneath the bonnet of actual inflation figures to the sub-component level, inflation may be higher in Japan than headline numbers suggest. Core consumer price index (CPI) inflation rose +0.5% y-o-y in December, but this metric excluding mobile phone charges came to +2.1% y-o-y, and +1.8% when calculated ex-mobile phone and hotel charges. It appears then that both metrics are already trending around the BoJ’s price stability target of +2% inflation.2 The cuts to mobile phone charges are set to drop out of the base effects from April 2022 since they were initiated in April 2021. So what can we expect from Japan’s inflation outlook going forward?

Looking ahead, Japan appears almost certain to implement a nearly US$1 trillion budget this spring, equivalent to almost a fifth of its current GDP value. This follows other additional spending to revive the economy. Such stimulus is potentially inflationary. According to media reports, policy makers are hearing some public discontent from rising living costs and the BoJ is informally considering its exit plan from easy conditions. With global commodities prices continuing to rise, supply chains still in disarray (exacerbating inflation pressures) alongside a weakening yen, the BoJ may eventually get to a place where potential tightening can be discussed.

However, deflation has been such a longstanding phenomenon in Japan, mostly driven by its ageing population, and more recently by a significantly negative output gap. Persistent inflation would be reliant more upon structural factors, such as wage pressures. Japan is yet to see its labour supply return to pre-pandemic levels, while there has been a slight decrease in the participation rate. It can be argued that this indicates a shift in Japan’s Philips curve – an indicator of the inverse relationship between unemployment and inflation – and therefore wages may see more upward pressure than before the pandemic.3 Current reviews of key annual spring wage negotiations (“shunto”) suggest that year-on-year increases will settle around 2% mark in 20224, a similar level to the pre-pandemic peak. In the BoJ’s January 2022 outlook, it stated that the output gap could turn positive – indicating the economy is at full employment – around the first half of the 2022 fiscal year.

Most central banks globally have engaged in some type of explicit tightening of financial conditions, but the BoJ is falling behind by only taking tentative steps, given the need to continue to stimulate Japan’s economy. The BoJ has been in stealth tapering mode for some time through trimming purchases to a recent low (Exhibit 1), albeit it has committed to continue to expand the monetary base until inflation exceeds 2%. Fewer purchases could allow yields to drift higher and the yield curve to steepen. 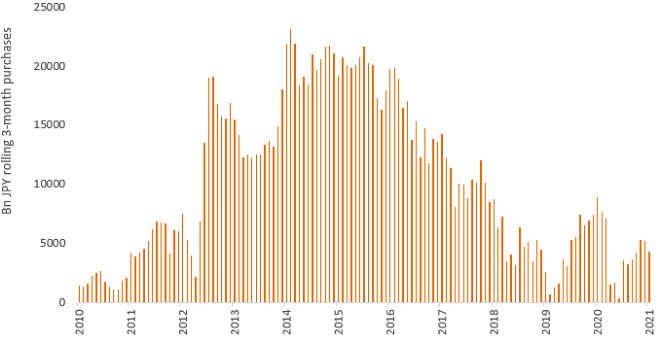 Quantitative easing (QE) has been an expensive exercise for Japan to artificially depress rates and keep borrowing costs low. This is particularly pertinent when considering the BoJ’s position as a buyer in the Japanese government bond (JGB) market. At its peak, the BoJ owned over 45% of all outstanding JGBs. Due to the very low level of average coupons and significant new issuance, accumulated central bank JGB stock is a much less relevant factor for the BoJ than for other central banks. Its total holdings as a percentage of outstanding debt have already flatlined even as the central bank continues to engage in asset purchases. In contrast, the US Federal Reserve, which is scheduled to end its asset purchase programme in March 2022, continues to see an increase of its holdings as a percentage of total outstanding debt (Exhibit 2).

Different tightening tools in the arsenal

As CPI rises but fails to sustainably break above 2%, even with most other central banks hiking, higher interest rates are most likely still far away for Japan. Given the BoJ didn’t upgrade its inflation forecasts for 2023, this also infers that tightening does not need to go this far. Instead, it will probably focus on the two easier to tweak tools in their arsenal – namely QE purchases and yield curve control (YCC) measures.

Direct YCC consists of setting a target interest rate for a particular maturity of the sovereign yield curve and communicating the intention to acquire the necessary amount of that type of asset to maintain the interest rate at the desired level5. As mentioned earlier, QE has only a marginal impact in the market, but the BoJ’s credibility and readiness to act to defend the YCC band is what keeps the market toeing the line in terms of yield moves. The stability of long-term interest rates is important to Japan given its high level of sovereign debt and as the economy is still healing from pandemic effects.

As global rates drift higher on tightening expectations, demand is shifting towards higher-yielding assets. As such, it could pressure JGB yields higher and test the YCC framework to keep the 10-year yield around +/-25bps, where it has been flirting around the top band. Looking at previous BoJ action, it tends to act quite quickly once data turns rosy. Exhibit 3 shows when it initially tweaked YCC in July 2018 shortly after inflation exceeded 1%. 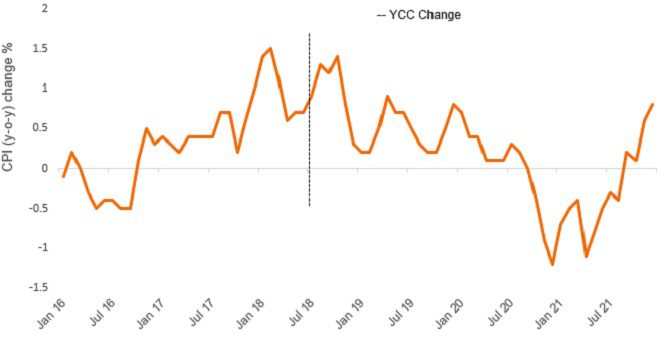 A steeper yield curve in sight?

The BoJ can opt to continue purchasing assets to depress rates (at a significant cost as it is effectively buying artificially overvalued bonds) or let government debt depreciate more in line with market conditions by tweaking the YCC policy to make it more sustainable.

A few options are on the table to achieve this. First, the BoJ could widen the YCC band again, doubling the current band, enabling the 10-year to move between +/- 50 bps. Second, it could shorten the YCC framework to target shorter duration bonds, and instead of targeting the 10-year, it could move it down to the 5-year or 2-year point. This could signal to the market that yield curve control is on its way out. Third, the BoJ could completely abandon YCC, like Australia did in November 2021, but commit to smooth market moves to avoid unwarranted volatility. As economic data improved in Australia, the 3-year targeted yield looked too low and the central bank abandoned YCC.

In all three scenarios, we anticipate the yield curve to meaningfully steepen as even after recent global flattening, the Japanese curve is flat versus global peers and its own history. A flatter yield curve is impacting the profitability of financial institutions by affecting margins, as banks for example pay short-term rates on deposits and receive long-term rates on loans.

As global government bonds continue to sell off in the anticipation of higher rates, JGBs have outperformed their global counterparts. The yield differential to US continues to widen and leaves the potential for yields to creep higher in Japan and a steeper curve to emerge. With the 10-year spread between Japan and US back to pre-pandemic levels (Exhibit 4) and significant lower levels of asset purchases, inaction on its policy framework could put the BoJ’s credibility to test.

Exhibit 4: US versus Japan 10-year yield spread widens back to pre-pandemic levels 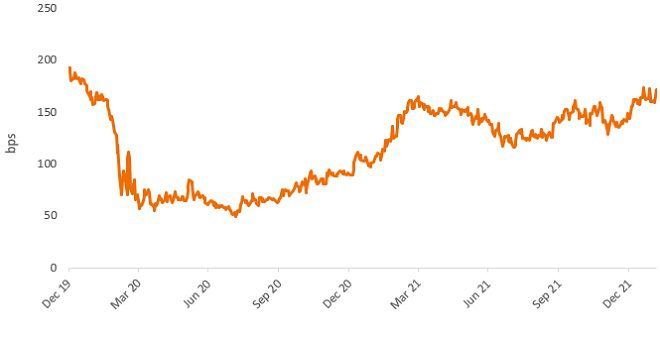