"While sweeping policy response is probably better considering the scope of the current crisis, it’s fair to wonder about the longer-term implications of these extreme and unconventional measures."

The global economy has been brought to its knees by COVID-19, with a collapse in demand unlike anything seen since the Great Depression. Economic shutdowns and social distancing policies have led to mass unemployment and the near-term impairment of entire industries. Authorities have responded with an array of public support policies that have led to trillions in deficit spending and massive monetary easing campaigns. While sweeping policy response is probably better considering the scope of the current crisis, it’s fair to wonder about the longer-term implications of these extreme and unconventional measures.

An enormous output gap—the difference between actual and potential output—has been created by millions of workers sitting idle at home and the economy running well below capacity. Federal Reserve (Fed) Chair Jerome Powell has warned of an “extended period” of weak economic growth saying that “the path ahead is both highly uncertain and subject to significant downside risk.” The International Labor Organization (ILO) estimates that over 80% of the global workforce lives in countries with mandatory or recommended closures. In the U.S. alone, 36 million Americans are unemployed. Hopefully these shutdowns are short-lived and we can all return to a more “normal” environment sooner rather than later, but significant damage has already been done. Given the nature of the health crisis and the absence of vaccine, it’s entirely possible—if not likely—that the rebound in economic activity will be lackluster. A recent working paper by the National Bureau of Economic Research (NBER) estimates that a devastating 42% of pandemic layoffs could result in permanent job loss.

In response to the uncertainty, consumers have cut spending and increased savings, businesses are slashing prices, and wages are under pressure. Deflationary pressures are all around. The environment today is not entirely dissimilar from the early 1930s, the last time a demand shock of a similar magnitude occurred. Chart 1 shows what happened to the Consumer Price Index (CPI) in the immediate aftermath of the Great Depression (1930-33). The good news is that today, unlike the early 1930s, policymakers seem to understand the gravity of the situation, and are acting to aggressively combat both the fall in real output and intensifying deflationary pressures. 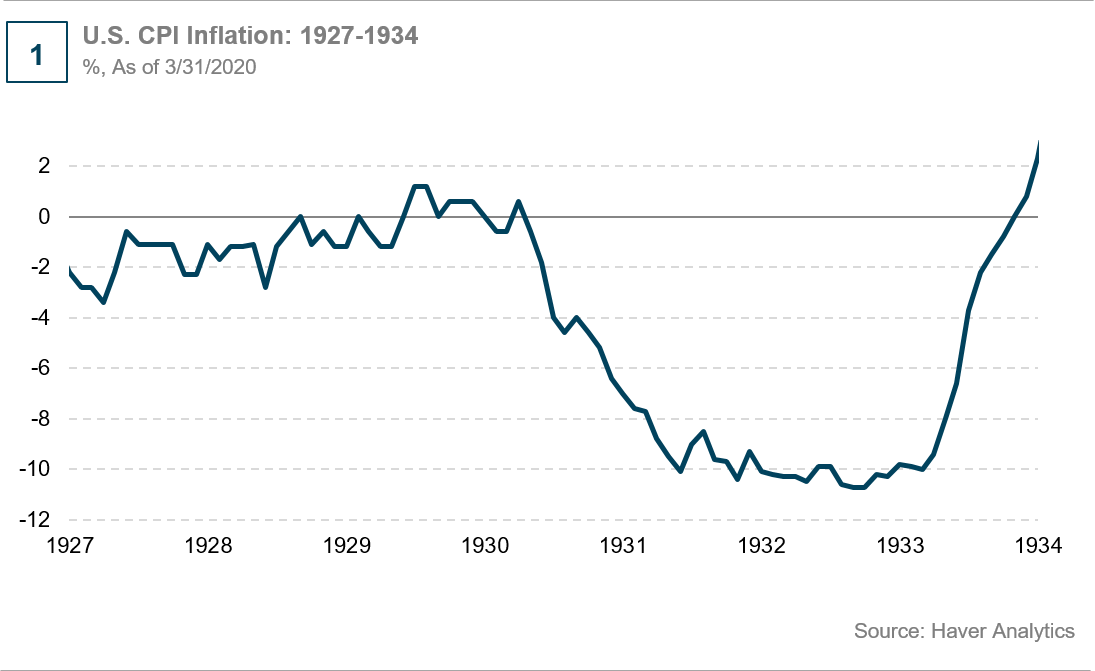 By almost all metrics, the global fiscal and monetary response to the current crisis has been incredible, both in magnitude as well as the speed at which the policy support has been deployed. In the U.S., deficit spending this year, as a percentage of GDP, will be close to a 100-year high—eclipsed only by deficits incurred at the height of World War II. If we include the expansion of the Fed’s balance sheet alongside the fiscal response, cumulative monetary and fiscal support in the U.S. is likely to be more than 40% of GDP this year, an astounding figure.

Looking around the world, the policy response has been equally potent. In Europe, Germany, Italy, the U.K., and France have announced even larger fiscal response packages than the U.S. Chart 2 below shows the direct and indirect policy support from around the world. Japan, the world’s most indebted country, announced a $1 trillion stimulus package, roughly 20% of GDP, while the Bank of Japan pledged to buy an unlimited amount of bonds to keep borrowing costs low. These actions go a long way toward preventing economic catastrophe, but they come at a longer-term cost. 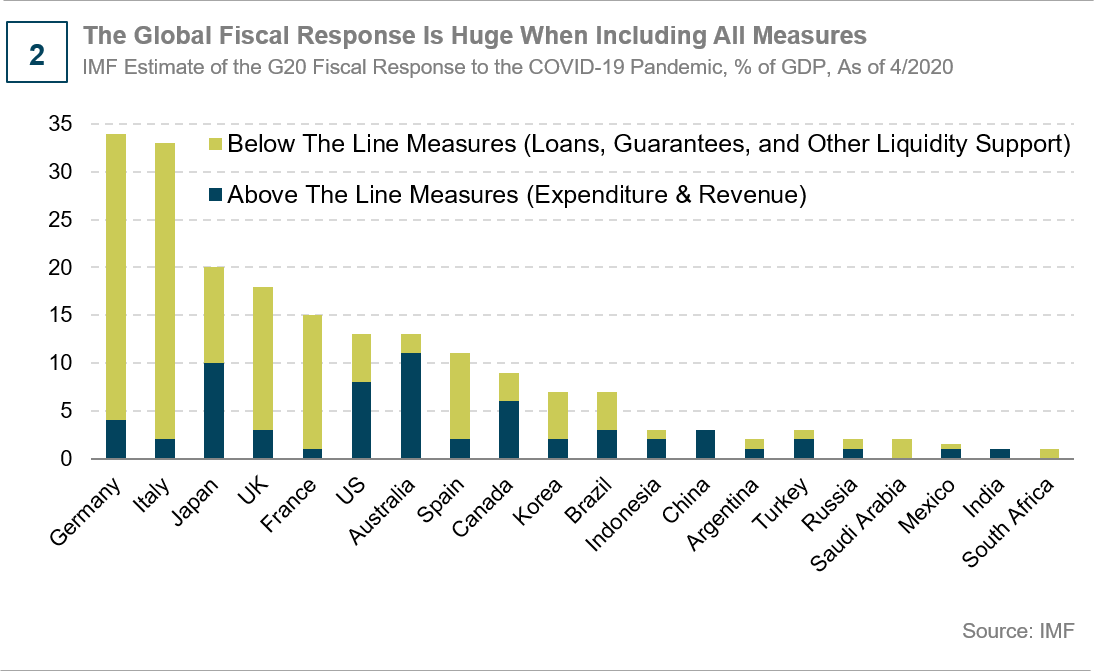 A Mountain of Debt

Debt, put simply, pulls future consumption forward. If a country borrows to buy something today, that money will have to be paid back over time and will not be available for other expenditures. Debt proceeds can be deployed for productive uses, but too much outstanding debt is not good either. The debt being incurred today to prevent an economic collapse is not productive in the long run. Governments are merely filling the economic hole created by shutdowns and widespread unemployment. The real challenge is that the world entered this crisis with a lot of debt and large unfunded liabilities. At the end of 2019, global debt reached an all-time high, exceeding $255 trillion at over 320% of global GDP. Debt today is almost $90 trillion higher than it was at the onset of the Great Financial Crisis. These figures will grow considerably once we add the bill from the COVID-19 stimulus packages. Therefore, U.S. debt as a percentage of GDP may end 2020 at a century-level high—at least. 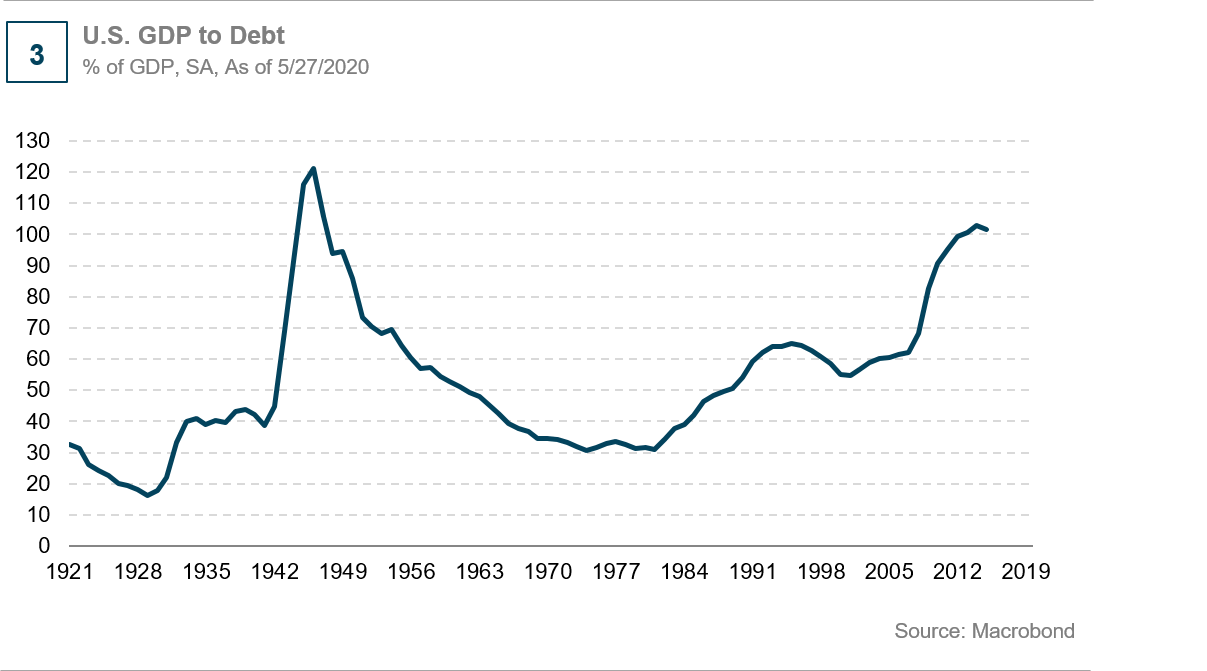 Over-indebtedness, as a society, has been a structural headwind to growth. There’s a good chance that the debt being incurred today will only serve to weaken future growth in addition to exacerbating the disinflationary trends that the U.S. and other countries are facing. It’s entirely possible that the global economy will emerge from this crisis in an even lower growth environment than the past decade.

As central bankers have become more creative, boundaries continue to be tested. Unconventional monetary policies, such as large-scale quantitative easing (QE) have become commonplace. Even the emerging world has joined the action with at least a dozen central banks s launching QE programs in response to the current crisis. As the lines between fiscal and monetary policy continue to blur, will these actions spark inflationary pressures? In the near term, it’s highly unlikely considering the deflationary malaise that will be with us for some time. Perhaps as the crisis abates, signs of inflation could appear if the money created by central banks makes its way into the real economy. This too, seems unlikely given the longer-term structural headwinds facing the world, including the mountain of debt discussed earlier. The experience from Japan over the past 20 years—and Europe over the past decade—is that bloated central bank balance sheets and unconventional monetary policies alone do not create inflation, nor are they an answer to a low-growth environment.

Perhaps the most concerning by-product of our current situation, and one that would lead to an inflationary outcome, is outright financing of government deficits by central banks—some form of Modern Monetary Theory (MMT). Recently, the Bank of England agreed to directly finance the U.K. Treasury for a small amount, over a short period in response to the COVID-19 crisis. While this small action seems harmless, and unlikely to spur inflation, the risk is that once the door is opened, it’s hard to walk back from it. In today’s politically charged environment—and considering how much debt is outstanding—there’s no saying how “creative” politicians might get to finance deficits. What’s easier to sell to constituents: raising taxes and cutting pensions, or having the central bank coordinate policy with the government? Any move to give central banks the power to spend, would be quite negative and inflationary for the country that chooses to walk down this path.

The world is amidst a significant deflationary shock and extreme policy measures are warranted to prevent us from falling into the abyss. But there is no free lunch and these extreme measures will come at a longer-term cost to society, especially when you consider the less than ideal starting point for the current crisis: a massive debt overhang, large unfunded liabilities, and bloated central bank balance sheets. Time will tell how great the cost will be.

Groupthink is bad, especially at investment management firms. Brandywine Global therefore takes special care to ensure our corporate culture and investment processes support the articulation of diverse viewpoints. This blog is no different. The opinions expressed by our bloggers may sometimes challenge active positioning within one or more of our strategies. Each blogger represents one market view amongst many expressed at Brandywine Global. Although individual opinions will differ, our investment process and macro outlook will remain driven by a team approach.