Stagflation: More Than A Short-Term Risk

For once, let us propose a medium-term economic perspective, an attitude quite contrary to the genes of Gavekal-IS which focus on measuring situations rather than forecasting, but paradoxes have never killed anyone.

With inflation spreading over the world like hot lava and economic growth (especially from China) beginning to show signs of weakness, a risk much forgotten over half a century is resurfacing and fueling conversations between investors: Stagflation!

For once, let us propose a medium-term economic perspective, an attitude quite contrary to the genes of Gavekal-IS which focus on measuring situations rather than forecasting, but paradoxes have never killed anyone.

Is the shadow of stagflation an optical effect or, on the contrary, can it be projected not over a few months, but several years?

The Origin of Growth

The economic value of a good or service comes from a single source we call in the manner of physicists ‘free energy’, namely the useful part of energy. Free energy combines two elements:

Without oil there would be no such thing as shoes, plastic, machine tools, cars, cargo ships, or fertilizer, so very little to dine on in the evening. Without the ability to process information, the internet would not exist, neither would planes, geolocation, smart phones and much, much more.

We swim in a pool of oil (well, and fossil fuels in general) and computer bits, and our standard of living in both the short and long term depends solely on its volume, with prices only being the consequence of its abundance or scarcity facing demand.

The price of energy today is very low, simply because humanity draws on a zero-cost nature reserve. Remember a liter of perfume is worth about 2,000 times a liter of oil. However, even if the price of energy were to fall again but our extraction capacity decreased in volume, there would simply be no growth.

Above All, Growth Is an Increase in Energy Consumption

GDP and energy consumption in all its forms and at the global level follow linked trajectories, as shown in Figure 1 on the next page. Oil shocks, especially in the 70s, contribute to massive transfers of wealth from energy-importing to exporting countries, but in no way affect the physical link between growth and energy volume.

Specifically, GDP is a polynomial function of order 2 of the energy consumed:

So, the ratio between GDP and energy grows linearly with energy:

For the past 120 years, humanity has been producing more and more human utility in the sense of GDP, per unit of energy consumed. Here we see the influence of the increasing efficiency of information processing in the production of free energy. 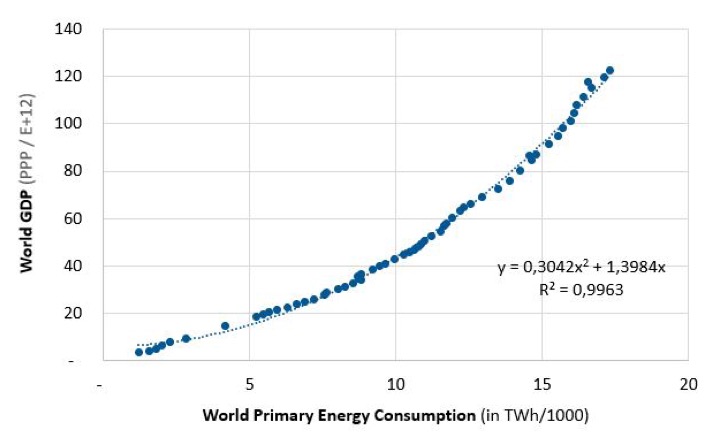 The annual changes in energy consumption and GDP presented on the next page in Figure 2 also show three things:

These observations are consistent with the economic utility understood as a free energy with two components: energy and information.

If we then zoom in on the last decades (Figure 3 on the next page) that concentrate many revolutions - end of the gold standard, globalization, emergence of powerful China, internet, etc. - we observe the perfect stability of the link described above: same sensitivity and same productivity trend.

It seems very difficult to escape the quantitative laws of physics. Only imagination and productivity, allows additional growth through information processing. But this innovative human capacity presents the greatest difficulties to grow globally for more than a century.

Fig. 2 World GDP and World Primary Energy Consumption in Annual Changes From 1900 to 2020 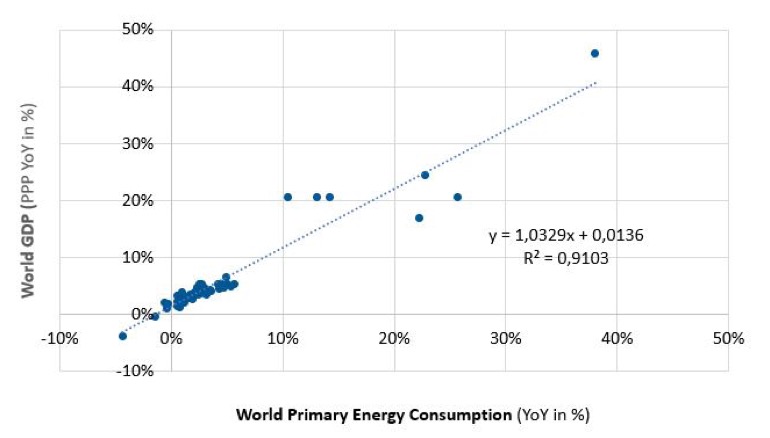 Fig. 3 World GDP and World Primary Energy Consumption in Annual Changes From 1985 to 2020 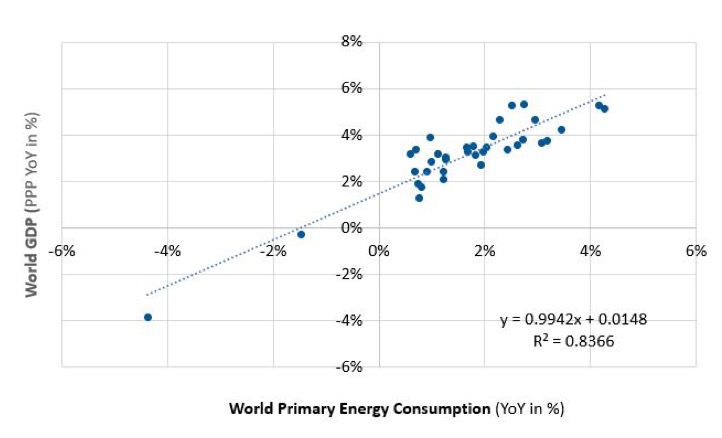 Our first conclusion is that any long-term projection of economic growth must be based on human energetic consumption and thus, primary energy extraction.

The so-called energy transition ambitions do not concern production in volume but in quality, that of reducing CO2 emissions. According to BP Statistical Review of World Energy, oil production is anticipated to fall by half over the next 30 years. Even with alternative energies spiking, the global growth of energy production is very likely to be weaker in the next 30 years than in the last 30. It could even at certain periods, simply stagnate or decline.

The US Energy Information Administration (EIA) for example forecasts a 1.20% annual increase in global energy consumption for the next 30 years, compared to +1.5% per year for the last 30 years, and +1.70% per year if we exclude the 2020 collapse.

The risk of stagflation is therefore neither a view of the mind nor a transient issue. However, it calls for further analysis of the risk of persistent inflation.

We do not go back on the inflationary pressures of this end of 2021 even if chief economist of the IMF Gita Gospinath warns of the need to be extremely vigilant in the face of inflation risks and to take rapid measures to tighten monetary policy. What scenarios can we foresee over the next few years?

As we have often pointed out in our publications, equity markets are not so much affected by inflation as by the acceleration of inflation. We measure acceleration by the difference between a CPI short trend (at one year) and a long trend (at 7 years). The economic situation is considered inflationary when the short trend is higher than the long trend. In such a case, the equity multiples collapse, lasting more than 100 years.

Today, the 2Y-inflation breakeven point is priced by the US TIPS at +2.8% and the 10Y at +2.5%. In this scenario, the inflationary period is anticipated to last between 20 and 31 months, as shown in the following table in Figure 4. And if inflation reaches 3%, the acceleration shall last more than three years.

Fig. 4 Duration of US Inflationary Pressures Depending on CPI Trends 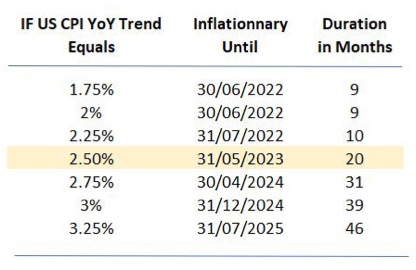 Inflation as we understand it is not going to disappear overnight. In addition, energy transition investments will be expensive and the temptation will be strong for governments to monetize its financing, thus reinforcing the inflationary risk.

Stagflation, or at least the inflationary slowdown in growth, is a scenario to be taken seriously at the global level for the coming years.