Modelling Risks to the Financial System

"Procyclicality is the key issue in the time dimension. It reflects the tendency to take on excessive risk during economic upswings - too much punch from the punchbowl, if you will - and to become overly risk averse during the downturns. Procyclicality makes the financial system and the economy more vulnerable to shocks, and increases the likelihood of financial distress."
Remarks by Agathe Côté Deputy Governor of the Bank of Canada
Bank of Canada, 21 August 2012

Some very interesting remarks on the multiple dimensions of system risk management, and how a model can attempt to capture these risk factors,  here are a few excerpts:

"While macroeconomic models have long been used to guide monetary policy decisions by central banks, models of financial stability and systemic risk are much less advanced."

The Multiple Dimensions of Systemic Risk

"Procyclicality is the key issue in the time dimension. It reflects the tendency to take on excessive risk during economic upswings - too much punch from the punchbowl, if you will - and to become overly risk averse during the downturns. Procyclicality makes the financial system and the economy more vulnerable to shocks, and increases the likelihood of financial distress."

"Risk concentrations and interconnections are the key issues in the cross-sectional dimension. Financial institutions can have similar exposures to shocks or be linked through balance sheets. As a result, losses in one institution can lead to fears of contagion that amplify the adverse effects of the initial shock. For instance, uncertainty about the viability of counterparties can lead to hoarding of liquidity, which may seem like an appropriate action for the individual institution but can have disastrous consequences for the financial system as a whole.

"Selecting the level of thresholds involves a difficult trade-off between false alarms and failure to signal an event, so in practice the early-warning indicators are used mainly to identify areas where more detailed investigation may be warranted. They provide an objective, practical starting point to detect the buildup of imbalances in the financial system."

"Given the complexity of systemic risk, it is unrealistic to expect a single measure or indicator to serve all purposes. Combining indicators can produce better signals with fewer false alarms and undetected crises. For example, research shows that combining the credit-to-GDP gap with a measure of real estate prices produces an indicator that performs better than either variable on its own." 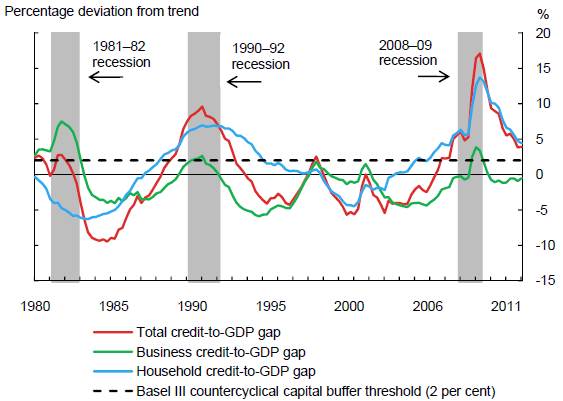 "Our own work at the Bank reinforces findings elsewhere that aggregate private sector credit and real estate prices are among the most reliable indicators of financial stress."

"Identifying sources of risk is essential, but so is determining the likelihood that these risks will materialize."

"Early-warning indicators are useful to gauge the probability of financial stress, but a thorough assessment also requires an analysis of what could happen if the risk materializes. This is the goal of macro stress testing."

"Household vulnerabilities depend not only on the average level of debt, but also on how debt is distributed across individuals."

"Another strength of the model is that it provides a flexible tool for simulating the impact on household solvency of a wide range of potential shocks, such as an increase in unemployment."

"Drawing on detailed data from bank balance sheets, MFRAF is a quantitative model that tracks the contribution of individual banks to systemic risk. Traditional stress-testing models focus exclusively on solvency risk, and estimate the overall risk to the financial system by simply aggregating credit (or other asset) losses that would materialize at individual banks in the event of a severe shock. MFRAF goes beyond this traditional approach by taking into account linkages among banks arising from counterparty exposures - or network spillover effects - as well as funding liquidity risk, that is, the risk of market-based runs on banks."

"MFRAF has been built to integrate funding liquidity risk as an endogenous outcome of the interactions between solvency concerns and the liquidity profiles of banks. This strong microeconomic foundation constitutes a major innovation in macro stress-testing models. MFRAF also incorporates network externalities caused by the defaults of counterparties, with the size of a counterparty’s interbank exposures increasing the likelihood of spillover effects."

"A key lesson from the model is that failure to account for either funding liquidity risk or interbank exposures could lead to significant underestimation of the risks to the financial system as a whole if the banking system is undercapitalized and relies extensively on the short-term funding market. Importantly, the loss distributions generated by the model exhibit fat tails, a key feature of the actual distribution of financial system risks"

"Nevertheless, while MFRAF is already somewhat complex, the layers of interaction will need to be further augmented. For instance, the model misses any negative feedback that could occur between heightened risks to the banking system and the real economy. The model could also be expanded over time to include other types of financial institutions and markets."