In the simplest terms, Modern Monetary Theory (MMT) posits that a sovereign country with the ability to print its own currency should do so. This theory laughs at the notion that the growth in debt of a sovereign nation results in risk of default and thus too much debt is bad. […]
Vineer Bhansali
LongTail Alpha, September 2, 2021

In the simplest terms, Modern Monetary Theory (MMT) posits that a sovereign country with the ability to print its own currency should do so. This theory laughs at the notion that the growth in debt of a sovereign nation results in risk of default and thus too much debt is bad. The main speed limit imposed on the quantity of debt for MMT-ers is inflation. As long as there is no inflation, the theory demands larger and larger credit expansion and money printing. For countries with their own printing presses, such as the United States, Japan and China, the theory provides cover for government spending plans based on lots and lots of borrowing.  For regions such as the Euroland, where is there is no fiscal union (yet), the European Central Bank is providing MMT of a sorts by bidding up bonds of the weaker countries at nosebleed prices using the credit of the more creditworthy countries (Source: ECB APP).

The extremely low level of currency volatility (see the picture of the JP Morgan Global FX Volatility Index)  has created an even more pernicious type of Global Modern Monetary Theory (GMMT). In this theory, a sovereign country can print an infinite amount of their own currency, and buy up the financial assets of other countries. For example, if the Japanese feel that their economic prospects in the long run are dim, they can print a whole bunch of Yen, exchange the Yen for dollars, and buy US Treasurys with positive yields. As long as the currency vigilantes do not call time out on this activity, Japanese public investors, for example can take their funny money and buy enough bonds for a sufficient length of time where the principal redemption of the dollars at maturity on the bonds will provide real dollar income in the future. In this set up, the coupon and interest rates become irrelevant. As a matter of fact, an extension of this strategy would be to buy bonds in Europe at negative yields and have the European bond redemption provide Euros in the future. The negative yield is just the cost of getting something for nothing; i.e. real Euros for funny Yen. But then funny Euros can be used to buy real assets in dollars, and then funny dollars can be used to buy other speculative assets globally…you get the picture. 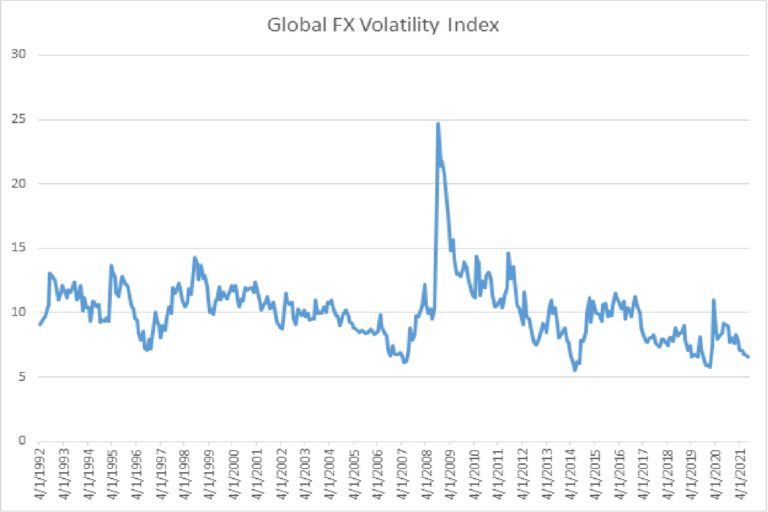 Imagine being able to use Monopoly money, or in today’s vernacular, Robux (the digital currency of Roblox which my daughter loves), to buy real money.  For those not well versed in e-sports, think of airline miles as a currency that can be exchanged for dollars, where the amount of miles and the way to earn them are set by the airlines.  As long as there is an exchange of funny money for real money, the owner of the funny money should rationally get into contracts to lock in the exchange for as long as possible. And yes, this is exactly what is going on when a large quantity of Yen is exchanged for dollar denominated Treasurys, or Euro denominated German Bunds, Italian BTPs, French OATs, Spanish Bonos etc.

If a private citizen engaged in this type of transaction — i.e. exchanging borrowed Yen or Euros for dollars — there would be currency risk. This trade, which is well known as the cross-currency carry trade, is exposed to the risk that the currency in which the asset is held weakens in the future, and the private investor has to pay back the loan at an adverse exchange rate, which would require more of the asset currency to exchange for the liabilities coming due. But a sovereign does not have the same risks. Since the sovereign (in this case Japan) can print more Yen, it can just pay itself back by printing more Yen. This is MMT on steroids – call it “Turbo MMT”. What about the converse; i.e. in our example the strengthening of the dollar? Well, now the sovereign has a more valuable asset in the future, so it can exchange the dollars received on redemption for more global goods. Heads I win, tails I win, as long as there is someone willing to take my currency for the promise of a future cashflow in their currency.

As astute readers will see, as long as currency volatility remains low and the assets don’t outright default, this strategy works wonderfully. In a paper I wrote way back in 2007 (Volatility and the Carry Trade, Journal of Fixed Income), there is a deep theoretical linkage between currency volatility and the carry trade, and the risk to this rosy arbitrage is that currency volatility for some reason spikes up, and the carry trades prospective gains for private investors are weakened. For sovereigns, the currency volatility means much less, unless the volatility is so large that it brings into focus the likelihood of an imminent default on long term obligations, or there is a buyer’s strike against the currency of the relevant sovereign for exchange.  Using the example from before, think of an airline where you have a lot of accumulated miles, and the airline is likely to go belly up. The value of the miles and frequent flyer’s confidence would suffer, including fewer flyers, even though chances are that when the airline emerges from bankruptcy, the new program would still honor part or all of your miles. The dynamic can result in a run on the currency, which is sufficient for the arbitrage to fall apart in the short term.

So the main risk to global MMT’s cross-country arbitrage is not that the sovereign country would default, since by definition the sovereign can just print more money – we have examples everywhere (just look at Argentina for example) of sovereigns doing just that. The main risk is that the perception of increased risk results in investors refusing to take the sovereign currency as a medium of exchange. Currency market panics are just as likely as credit market panics, though we have not had a major one since the panic and run on the British pound that only a few of us remember.

The obvious question then is: are we there yet?

In my view, the water is getting warm, but it is not boiling yet. The frog is beginning to feel some discomfort, but he is not ready to jump out just yet (or obliviously boil to his death, as goes the myth). For investors, the action items might be a little more definitive. If the global financial markets are at a point where a country with dim economic prospects can create income by lending funny money to others who do have bright economic prospects, then at some point the currency markets have to move to readjust for this arbitrage. With the incredibly low levels of currency volatility today, investors would be prudent to consider owning optionality against a sharp and sudden collapse in the Global MMT house of cards.  In the end, exchange rates are the fundamental price equilibration mechanism across countries. While it is hard to ascertain the direction of individual currencies, it is much easier to imagine a world in which the return of currency volatility puts some limits on the ability to exchange funny money for real money.

A corollary for most investors is to also recognize that some part of the funny money from GMMT has gone into stocks. The risk of a sharp bout of currency market volatility is a cascading effect on the stock market’s perception of risk and the continued inflow of foreign capital that will support an already stratospheric stock market. A sudden stop to the spigot of foreign capital could be the cause for the next big hiccup in US stock markets. If the chain of funny money based “investment” comes to a stop, asset market appreciation could come to a sudden stop.