"Official data published last week confirmed that investment by state-owned enterprises surged during the first three months of this year, with the scale of the turnaround strongly reminiscent of the early 2009 period. "
Fathom Consulting, News in Charts, April 21, 2016

In our Global Economic and Markets Outlook for 2016 Q2 – due to be presented at an event hosted by Thomson Reuters on 10th May – we put forward the case that Beijing was likely to throw in the towel on rebalancing, and ‘double down’. Official data published last week confirmed that investment by state-owned enterprises surged during the first three months of this year, with the scale of the turnaround strongly reminiscent of the early 2009 period. Although returning to the old ways will boost growth for a while, ultimately it will only add to China’s excess capacity and non-performing loan problem. 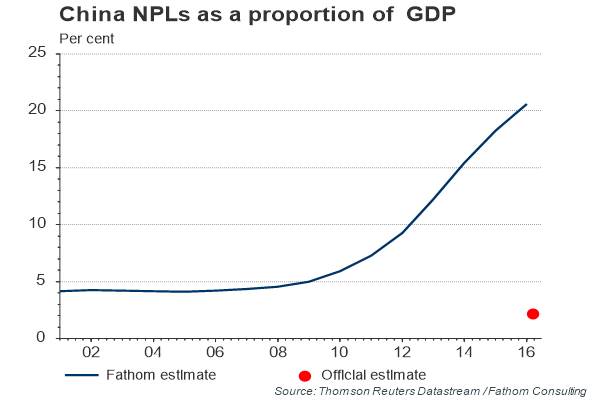 As evidence of China’s overcapacity problem continued to mount, the authorities in Beijing faced a stark choice. They could allow the credit-fueled investment binge to continue unabated. Or they could ease off on the stimulus, and try to rebalance the economy away from investment and net trade towards the consumer, always facing the risk that growth would slow markedly, laying bare the extent of China’s non-performing loan problem. They took the second approach, and by late last year, it became clear that it had failed. Growth had slowed dramatically. According to our own CMI, it was close to 2.0% — far below the official estimate. 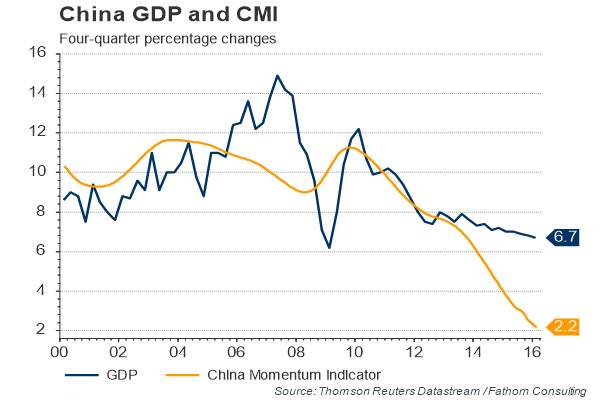 With precious little evidence to suggest that China’s economy was rebalancing, we have argued that policymakers were set to throw in the towel and instead ‘double down’. That meant a return to the old ways, with growth driven primarily by investment.

Officially, and according to data released last week, China’s economy expanded by 6.7% in the four quarters to 2016 Q1. But from Fathom’s perspective, the monthly investment data, released at the same time, were more revealing. These showed that annual growth in fixed asset investment by state-owned enterprises had jumped from just over 10% at the beginning of the year to more than 20% by March. That is strongly reminiscent of the pattern we saw in early 2009. Moreover, annual growth in residential construction spending, which had been slowing over the past two years, surged from almost zero in January to almost 5% in March. 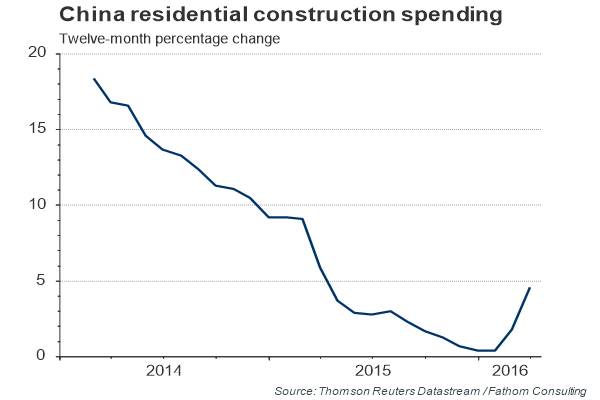 Meanwhile, there is growing evidence that China’s authorities have begun to let credit flow more freely again. China’s broadest measure of net lending, known as total social financing, climbed to its highest level on record in the first quarter of the year. 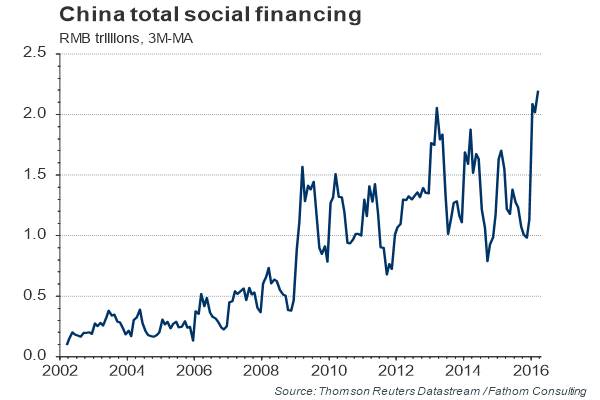 While this may boost China’s economic growth in the short term, the inefficiency with which credit is being disseminated implies even more excess capacity and a worsening of China’s already substantial non-performing loan problem. These losses must be realised somewhere within the system, meaning that eventually excessive credit will hamper, rather than promote growth. By ‘doubling down’, China’s authorities are merely storing up problems for the future.