There are 15 electronic gimzo type items on this page, being sold from America's Technology Store. 13 of the 15 you now always have in your pocket.
Steve Cichon
Trending Buffalo, January 14, 2014

Some people like to spend $3 on a cup of coffee. While that sounds like a gamble I probably wouldn't take, I'll always like to gamble - especially as little as three bucks- on what I might be able to dig up on Buffalo and Western New York, our collective past, and what it means for our future.

I recently came across a big pile of Buffalo News front sections from 1991, every day for the first three months of the year...­ collected as the First Gulf War unfolded. $3. I probably could have chiseled the guy down a buck, but I happily paid to see what else was in those papers.

Theres plenty about a run up to the first Superbowl appearance ever for the Bills, and mixed in with the disappointment is an air of hope and expectation for what is to come. Harumph. There are also some great local ads commemorating and/or coat-tailing on the Bills success.

We'll get to those someday, but today, something much simpler. The back page of the front section on Saturday, February 16, 1991 was 4/5ths covered with a Radio Shack ad.

There are 15 electronic gimzo type items on this page, being sold from America's Technology Store. 13 of the 15 you now always have in your pocket. 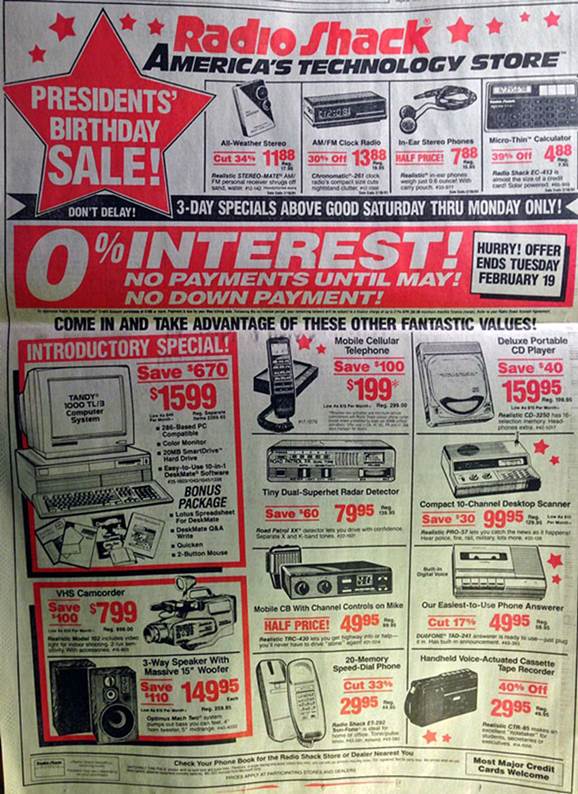 So here's the list of what I've replaced with my iPhone.

The only two items on the page that my phone really can't replace:

It's nothing new, but it's a great example of the technology of only two decades ago now replaced by the 3.95 ounce bundle of plastic, glass, and processors in our pockets.
Source: TrendingBuffalo