Memo to the (Virtual) Investment Committee II: Fear and the Psychology of Bear Markets

While it is, of course, a cliché to say that markets are driven by fear and greed, like many clichés this one contains a strong element of truth. The bad news for us humans is that within our brains, emotion appears to have primacy over cognitive function.

While it is, of course, a cliché to say that markets are driven by fear and greed, like many clichés this one contains a strong element of truth. The bad news for us humans is that within our brains, emotion appears to have primacy over cognitive function. While this may well have kept us alive and allowed our species to thrive, this uncomplicated hierarchy doesn’t necessarily work in our favour when it comes to thinking about financial markets.

When I first contemplated writing this series, little did I know I would feel the urge to write a second memo so shortly after the first, so forgive me for adding to the burden of your reading. However, you will be relieved to hear that I am not about to turn into an armchair epidemiologist of which there seem to be a positive plethora. Like many others, I have read much of what has been said by the experts, but this doesn’t make me in the least bit qualified to opine on the subject with any authority. Instead I want to write briefly on the psychology of fear as it relates to bear markets.

It is, of course, a cliché to say that markets are driven by fear and greed, but like many clichés it contains a strong element of truth, which is how clichés are born. I have spent much of the last decade talking about the greed side of the psychological equation, but the pendulum swings of market sentiment now leave me exploring the fear side.

The bad news (as if there weren't already enough of that about) for us humans is that within our brains emotion appears to have primacy over cognitive function. Our brains can be thought of as consisting of two different, although obviously interconnected, systems. One is a fast and dirty decision maker (the X-system), the other is more logical but slower (the C-system).

The X-system’s output is often unchecked, or at least checked only too late, by the C-system. My favourite example of this is to imagine I place a glass box containing a snake on the table in front of you. Now I ask you to get nice and close to the glass. Being a very obliging person, you do as I bid. If the snake rears up suddenly, you will naturally jump back, even if you have no fear of snakes. The reason for this is that your X-system ‘recognized’ a threat and forced your body to react, all of which happened long before the C-system had a chance to chime in and point out the protection offered by the glass box. In fact, it appears that the X-system reacts about three times faster than the C-system. From an evolutionary point of view this all makes perfect sense. The rapid response to fear carries a very low cost of a false positive relative to the potentially fatal cost of a false negative.

While this uncomplicated mechanism may well have kept us alive and allowed our species to thrive, it doesn’t necessarily work in our favour when it comes to thinking about financial markets. A fascinating study was conducted by Shiv et al.1 in which players were asked to participate in a game. At the start of the game each player is given $20 and told the game will last 20 rounds, each of which involves winning or losing based on the result of a coin flip. Before each round each player is asked if he or she would like to invest $1 to play. If the answer is yes, then the $1 is ‘invested’ and a coin is flipped. If it comes up heads, winners receive $2.50; if it comes up tails, the dollar wagered is lost.

Now, there are two things we know about this game. First, obviously it is optimal to invest in all rounds due to the asymmetric nature of the payoff: the expected value is $1.25 per round, giving a total expected value over the course of the game of $25. In fact, there is only a 13% chance that a player finishes the game with total earnings of less than $20, which is, of course, the initial endowment and the amount kept if one doesn’t invest at all. The second thing we know is that the outcome of a prior round shouldn’t impact the decision to invest in the next round – the coin has no memory (although we humans do).

Despite knowing these two things, the study revealed some telling data about how fear drives human behaviour. Exhibit 1 shows the percentage of time people chose to invest across the full 20 rounds. As you can see, there are three different groups. The group labelled ‘Target’ have a very specific form of brain damage that effectively renders these individuals incapable of feeling fear. The ‘Normal’ group are people like you and me (ostensibly without any brain damage). The ‘Control’ group are those with brain damage2 in other parts of the brain not related to the processing of emotion. As the exhibit makes clear, those who are unable to feel fear invest a considerably higher percentage of the time (almost 85%), while the other two groups invest only around 60% of the time.

Exhibit 1: % of Rounds where Participants Invested

When we break the data down into the behaviour conditional on the outcome of the previous round, we start to see something really interesting. Specifically, look at the second column in each of the three groups in Exhibit 2. This is the percentage of time that players chose to invest after a round in which they suffered a loss. The Target group – those who can’t feel fear – behaved quite optimally, investing around 85% of the time after they had lost money. However, the other two groups displayed seriously suboptimal behaviour, investing just 40% of the time after a round in which they lost $1!

Exhibit 2: % of Time Invested Based on Prior Round Outcome 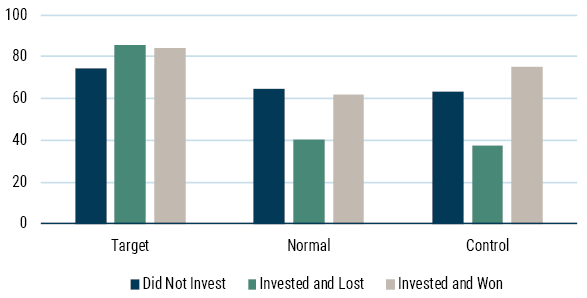 The experiment also revealed an interesting pattern across time. Exhibit 3 shows the 20 rounds broken down into 4 groups of 5 rounds, and the percentage of time that group decided to invest. The Target group behaved consistently (and pretty close to ‘rational’). However, both the Normal and Control groups showed a marked tendency towards conservatism, investing in fewer and fewer rounds as time progressed. It is clear that emotional responses from previous rounds carried over to subsequent rounds.

Exhibit 3: % of Time Invested by Round Grouping

The parallels with bear markets are, I hope, obvious. The evidence above suggests that it is pure fear that drives people to ignore bargains when they are available in the stock market, especially if they have just suffered a loss. It is sadly true that sales in the stock market are the one type of sale that no one seems to enjoy, with the exception of us dedicated value investors.

Of course, this game is designed to reward risk-taking. If the game were reversed and taking risk generated poor returns, then the Normal who could feel fear would outperform the Target group.

Bear markets are generally characterised by low valuations, which we can see across global markets today (Exhibit 4). We would all do well to remember that, as Sir John Templeton put it, “The time of maximum pessimism is the best time to buy.” Of course, no one knows exactly when we reach peak fear, but buying cheap is a good start.

I leave you with a story relayed by Abraham Lincoln:

It is said an Eastern monarch once charged his wise men to invent him a sentence, to be ever in view, which should be true and appropriate in all times and situations. They presented him with the words “And this, too, shall pass away.” How much it expresses! How chastening in the hour of pride! How consoling in the depths of affliction!

2 Technically they have lesions on the orbitofrontal cortex, the amygdala, or the right insulator somatosensory cortex – all areas associated with the emotional processing of the X-system.

Disclaimer: The views expressed are the views of James Montier through the period ending March 2020, and are subject to change at any time based on market and other conditions. This is not an offer or solicitation for the purchase or sale of any security and should not be construed as such. References to specific securities and issuers are for illustrative purposes only and are not intended to be, and should not be interpreted as, recommendations to purchase or sell such securities.