When stocks endure a rough stretch, sometimes one of the biggest sources of discouragement for investors isn’t what they see in headlines. Often, it is simple math: However much stocks fell in percentage terms in a bear, they must achieve a much greater return on the way up in order to break even. Thus far, this bear market’s biggest drawdown was -34.0% for global stocks, notched in just five and a half weeks.[i]

To simply get back to breakeven, world stocks would have to rise 51.6% from the low and 29.7% from Monday’s close—and that presumes there isn’t another downdraft, which is utterly unknowable.[ii] Compound that uncertainty with the fact that global stocks have historically achieved an 8.8% annualized return since the MSCI World Index’s inception, and the future can seem daunting.[iii] But it needn’t be. Not only are average bull market returns far above stocks’ overall long-term average, but much of the gain typically comes early. Don’t discount the strong potential for stocks to be back at new highs sooner than anyone thinks possible.

To illustrate this, we will explore history using S&P 500 data, as it has the longest available reliable dataset. Exhibit 1 shows the time stocks took to break even in price terms following every market trough since 1926. 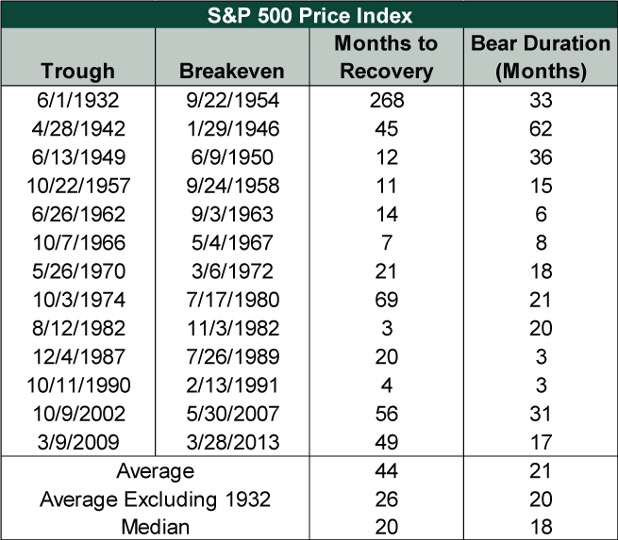 Outside the Great Depression, this history is encouraging. Over half the time, recovery took less than two years. This means early-stage bulls typically reach their breakeven points a lot faster than stocks’ average return would imply. There is a simple reason for this: Total long-term returns include bull and bear markets. Bull market average annualized returns therefore must be faster. Since 1925, the S&P 500’s overall annualized total return is 10.8%.[iv] At that pace, the index would take over four years to recover from its most recent low to pre-bear levels. But in bull markets, returns average 23.7% annualized.[v] A lot of those gains came early. (Exhibit 2)

Given the speed of this downturn and the magnitude of some of the economic forecasts, some may wonder if the Depression’s decades-long path to breakeven is more of a parallel for today. Both the very near and very far future are impossible to predict, but it is worth noting the huge confluence of negative factors that contributed to delaying the recovery. Those 22 years encompassed three bear markets, with bull markets in between and the onset of World War II adding a second wallop a decade in. The bear market that began with the crash of 1929 was long and brutal, but it didn’t prevent a bull from beginning in mid-1932. Stocks were halfway to recovery by 1937, but the Fed cut the rally short, in our view. To rein in credit, it doubled banks’ reserve requirements, severely contracting money supply, which tipped the economy back into recession. The recession ended when the Fed rolled back reserve requirements in 1938, but then, shortly thereafter, the Nazis annexed the Sudetenland, which truncated what we believe was a nascent bull market. Growing recognition of Hitler’s territorial ambitions and the likelihood of world war renewed the bear, which would continue for years. Another bull began in 1942 and ran until May 1946, when the third bear of this stretch began, tied to ongoing interest rate controls and the unexpected extension of wartime price controls and rationing. A new bull began in June 1949, then the recovery to 1929’s peak took another five years. Note however, this is all in price terms, leaving out significant contributions investors would have seen from dividends. On a total return basis, including dividends, the S&P 500 hit new highs in early 1945.

In sum, stocks’ long road to recovery was a result of unique Depression-era and wartime circumstances. Today’s circumstances are also unique. Never has a bear market started so quickly or because of society’s reaction to a pandemic. But markets still work as they always have, leading economic turning points. Absent a second wallop, we should have a normal recovery—it is a matter of when, not if, in our view.

It is impossible to predict the very short term even under normal circumstances. The vast quantity of unknowns today, including how long COVID-19 containment efforts will shutter much of the private economy, makes trying to pinpoint the bear market’s end even more futile than usual. If COVID-19 fades with the normal flu season, as some experts think it will, then America and Europe could be back to work in weeks, with the demand pent-up by the closures finally getting unleashed. If the virus lingers or resurges next year, then disruptions could persist until there is a vaccine. Not knowing is frustrating, but this is the situation we are in. So instead of dwelling on the short term, we encourage investors to think as markets do, looking ahead to the next 3 – 30 months or so.

The economic contraction that this bear market preceded isn’t a garden variety recession, where euphoric investors drove excesses in business investment that must be reined in to refresh the cycle. It was an engineered shutdown of the private economy for a well-intended purpose. As such, with the exception of those businesses for whom government bridge loans won’t be enough to survive the closures, this contraction likely isn’t causing permanent destruction of wealth and productive capacity on a wide scale.

When officials deem the public health emergency over and businesses reopen, the resumption of economic activity where it left off—and perhaps then some to meet pent-up demand—can drive a leap in growth, as there aren’t major supply overhangs to wring out. If anything, there are shortages, hinting at a snapback to growth. Stocks, having correctly pre-priced a sharp contraction, likely do the same on the other side—rising long before the virus recedes and business returns to normal.