Our thoughts on a novel way some news coverage has displayed unemployment.

Last week, we highlighted stocks’ strong tendency to move before unemployment data—falling before unemployment starts rising during a recession and rising before the unemployment rate peaks post-recession. This bear market and economic contraction, thus far, have been hyper-compressed. Stocks’ decline preceded data putting numbers on stay-at-home orders’ economic impact, including weekly jobless claims. The rally since March has been similarly fast and ahead of economic data, which is normal at the end of a bear market. Should it hold, the rise preceding the unemployment peak, though also hyper-compressed, would be quite typical.

One article that caught our eye on Monday presented the S&P 500 Index and unemployment rate in a visual way we hadn’t encountered before. It took the last 10 years of S&P 500 price index levels (the full history available for free public use at the St. Louis Fed’s FRED database) and unemployment rate and made a scatterplot—unemployment on the Y-axis (vertical) and stocks on the X-axis (horizontal). It then connected all the dots in chronological order. The result, which we have recreated, looked like this (although the data labels here are ours):

Exhibit 1: A Creative Look at Stocks and Unemployment 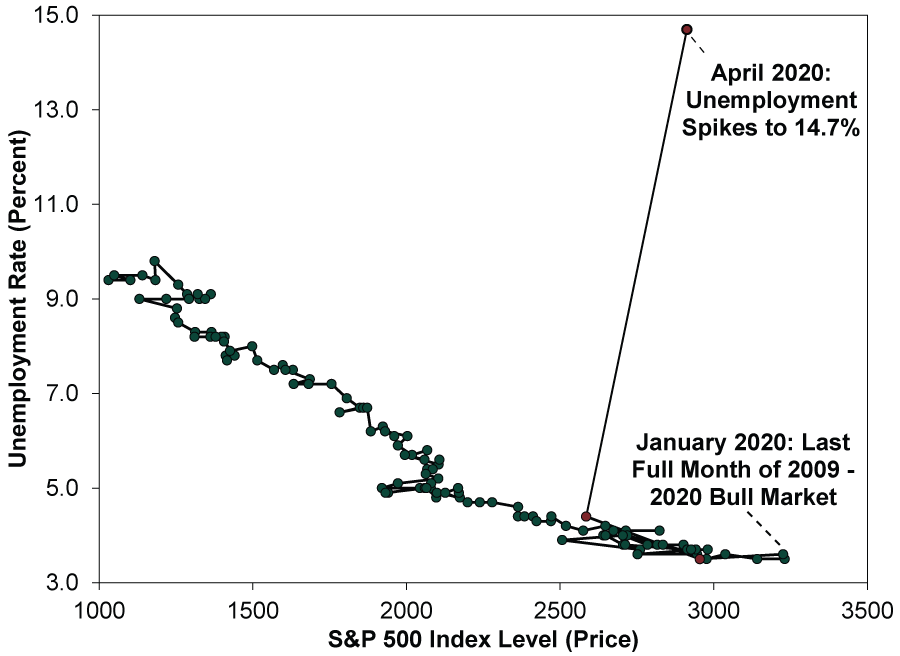 What it shows is that stocks enjoyed a long bull market as unemployment gradually improved, peaked before unemployment began rising, fell as it inched higher in March, but regained a good amount of lost ground by the end of the month in which unemployment hit 14.7%. To us, though the end numbers are extreme, this seems fairly typical of how stocks and unemployment interact during a market cycle.

The article took a different view, though, arguing the last datapoint shows a fundamental change in stocks and unemployment’s relationship. It portrayed stocks and unemployment as strongly linked, citing this as further evidence that stocks and the economy are out of step with each other. To its credit, it didn’t argue this automatically presages a huge drop as stocks reckon with the reality of more bad economic data to come, and it did point out the simple truth that the stock market isn’t the economy. But it did end at a place most other commentary we have seen lately does, arguing reality will have to prove very positive in order for the rally to continue.

Usually we would tackle something like this in the “What We’re Reading” section of MarketMinder, but in this case, it isn’t possible to adequately explore counterarguments without taking the data back over a few complete market cycles—and showing you charts of our findings. Our hypothesis upon reading the piece was that the chart showed a sudden disconnect because it began over a year into the prior bull market due to data availability. We suspected that if we extended the dataset to a full market cycle (bull and bear market), and stretched it back over a couple of prior cycles, it would show that, speed and big numbers aside, things aren’t different this time.

Exhibits 2, 3 and 4 show our findings. The first shows our modified version of Exhibit 1, starting at stocks’ October 2007 peak and ending in January 2020, the last full month before the bear market began. The next two take the same approach for the prior two bull (and preceding bear) markets. 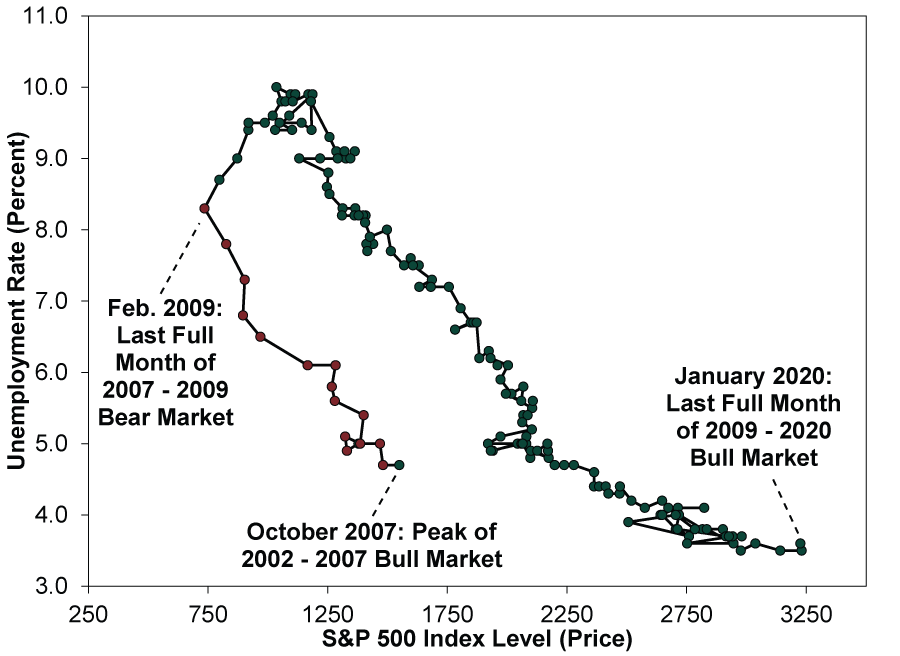 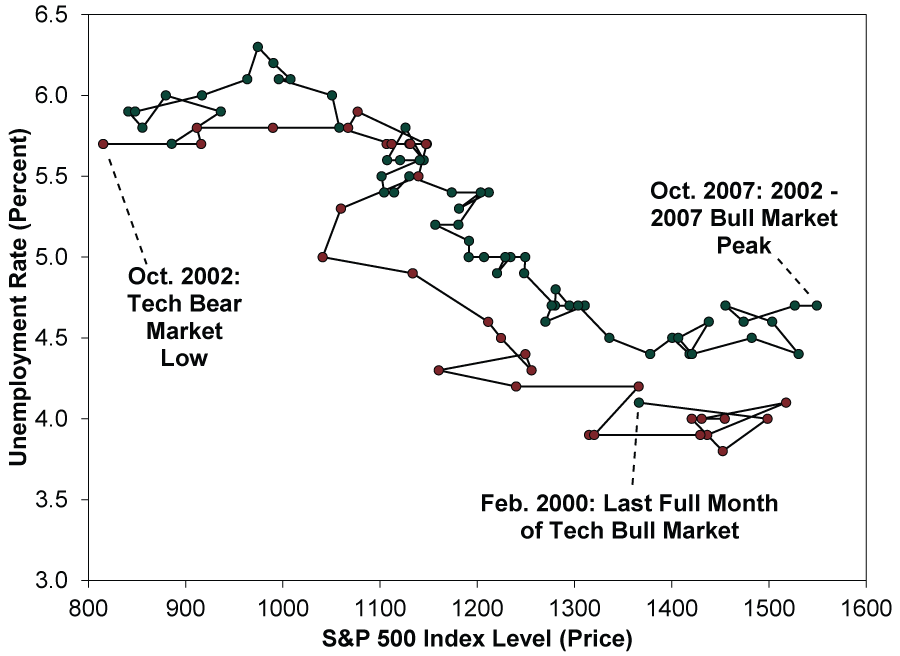 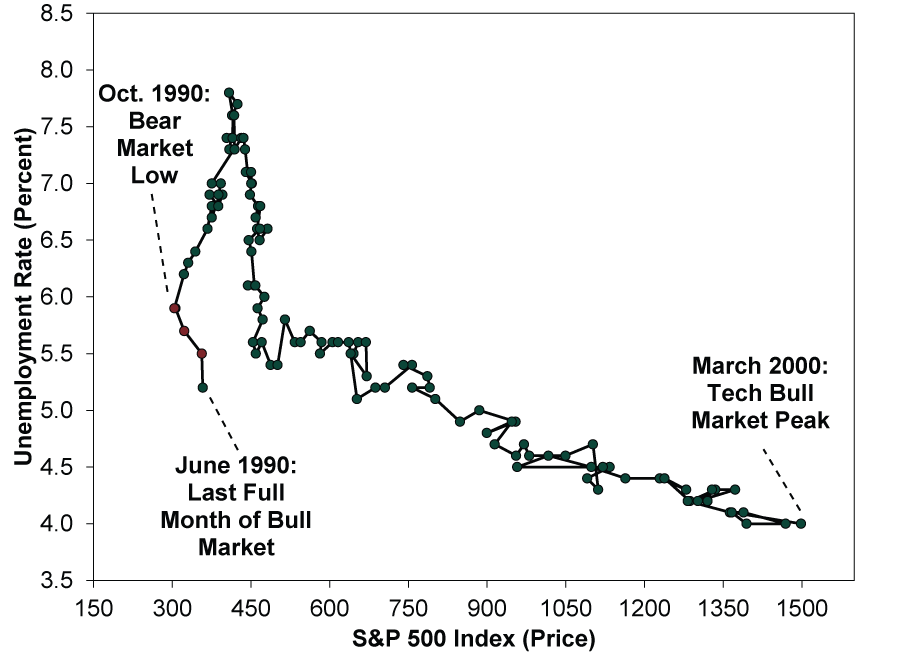 Directionally, the tail end of Exhibit 1 (which shows this bear market and the rally since March) isn’t different from the first two legs of that general pattern. The only nuances are its speed and the magnitude of the unemployment jump. But stocks have known from lockdowns’ start that the magnitude of unemployment and other data would be awful. What matters more, in our view, is duration. How long will these interruptions to business erase economic activity and keep people from going back to work? To us, stocks appear to have started fathoming the eventuality of life returning to normal as shelter-in-place orders gradually ease in America and Europe. Should that prove too optimistic, then more downside could await. Yet with expectations having deteriorated so much over the past few weeks, as we discussed last week, negative surprise power seems to be fading. Time will tell if that thesis proves correct, and we are always looking to risks to it. But in the meantime, because stocks lead all other indicators, expect to see more supposed evidence of stocks’ detachment from data, and remember it won’t tell you whether this is a bear market rally or a new bull market. Frustrating as it may be, that will be clear only with several months’ hindsight.