Has to Be a Compromise between Equality and Freedom.

Let Us Begin with Equality and the Gini Coefficient

Most politicians, economists, journalists, etc. know about the so-called Gini coefficient, a measure of statistical dispersion intended to represent the income inequality (or wealth inequality) within a nation or group of people. At zero we have perfect equality; at 1 we have perfect inequality, one individual capturing the whole income, leaving nothing for the rest of the group. In reality, the Gini coefficient - as computed by the specialists - varies between .25 (very egalitarian societies) to .65 (very unequal ones).

Most people on the left of the political spectrum consider the most desirable result of a policy to be an ever-falling Gini coefficient, going down asymptotically towards zero, and that the role of the State should be to achieve such an outcome by force (nationalisation) or by taxes and redistribution. Each and every one of these politicians, if and when elected by more than 50% + 1 of the population, will then work steadfastly to increase taxes on the high earners and/or the “rich” to transfer money to the low earners and the poor, in order to establish the highly desirable so-called “social justice.” But, as the French philosopher Montesquieu once said, “A perfect equality of income in a country would require the whole of the political power to be exercised by only ONE man,” and this is what the story of totalitarianism in the 20th century has taught us in no uncertain terms.

Let Us Move to Freedom and the Pareto Law

So, in a purely Darwinian world with no intervention by the State, around 1% of the population would create and earn roughly 50% of the wealth created for a Gini ratio of around .50. Therefore, it should be no surprise that 1% of the population controls 50% of the assets as this is just a result of Pareto’s Law. Refusing such reality is about as stupid as revolting against gravity or death.

However, one does not need to be a rocket scientist to infer from the set of hypotheses mentioned above that there is a built-in contradiction between the political push towards equality by the leftist politicians and Pareto’s Law which is a natural push towards inequality.

By design, the leftist politicians will take money from the efficient minority to give it to the not-so-efficient rest of the population (capturing a significant part of it for themselves and their cronies in the process) and, probably at some point, we will reach a level where the Gini coefficient will keep going down (improving in the eyes of the said politicians), but where everybody and especially the poorest will only get poorer and poorer, simply because the entrepreneurs will stop taking risks or move abroad. So, there must be some sort of a trade-off between equality and freedom, and there is, according to the graphs below. There is a generally accepted way to measure inequality - the Gini coefficient - and there is also a not-so generally accepted measure of freedom, this time provided by the Heritage Foundation. Both have long track records and the methodologies to build them have not changed for quite a while. I pass no judgment on how these two indices have been built, nor on how valid they are; I am simply trying to use them to check on the trade-offs between equality and freedom by building the following graph. 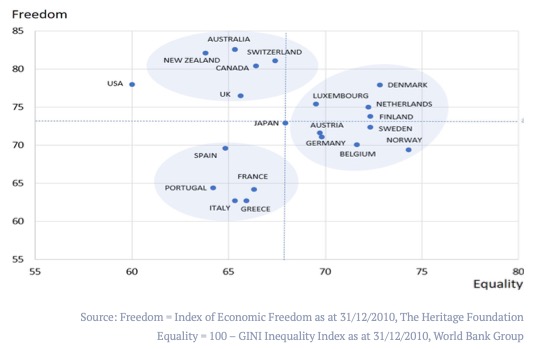 On the Y-axis we have put the “freedom” index, and on the horizontal axis the 100-Gini coefficient to measure “equality.” The data for both indices (which move very slowly) are for 10 years ago (i.e. before the current monetary experiments), and the results for the financial markets (see second chart) are for the last twenty years.

We have three groups of countries and two outliers emerging:

The bigger the power of the State (less freedom) seems to equate with more inequality, which should surprise no one.

The “optimum” seems to have been reached by the Lutheran group, and the reason might be simple. The State passes laws for equality to be achieved (like all children must have a good education), but the supply of educational services is not provided by civil servants but by the private sector in a competitive manner (educational vouchers). The same being true for retirement benefits, as another example. The State prescribes what must be done, and the competitive private sector deals with the production side of the requirement, with the results being checked by agencies of the State.

We have built stock market indices for the three clusters and for the two outliers (see above). Here are the results: 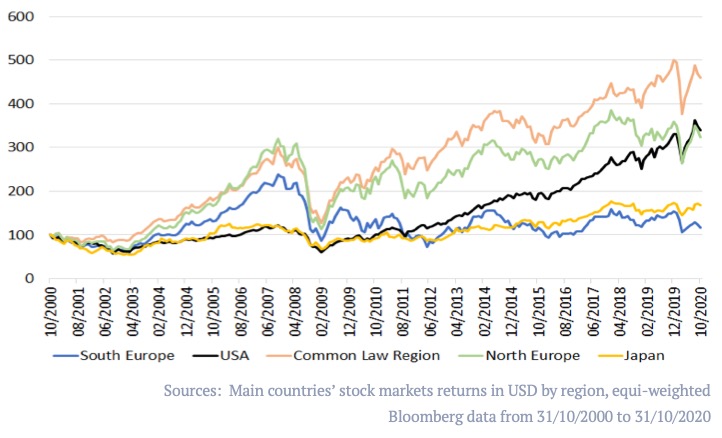 Fig. 3 Stock Market Performance as a Function of the Freedom Index by Country (20-Year return p.a, in USD) 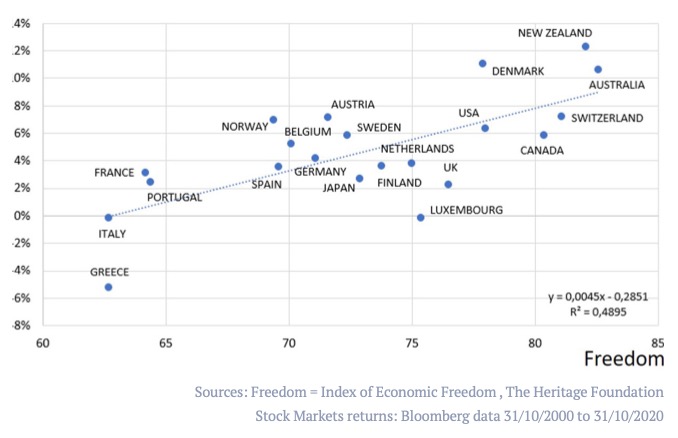 Developed economies’ portfolios should be concentrated in the US, the Common Law area and the Lutheran countries.

The most stable cluster has to be Lutheran Europe, the safest legally is the Common Law area, and the most Schumpeterian one, the US.

© Gavekal Intelligence Software. Redistribution prohibited without prior consent. This report has been prepared by Gavekal Intelligence Software mainly for distribution to market professionals and institutional investors. It should not be considered as investment advice or a recommendation to purchase any particular security, strategy or investment product. References to specific securities and issuers are not intended to be, and should not be interpreted as, recommendations to purchase or sell such securities. Information contained herein has been obtained from sources believed to be reliable, but not guaranteed.