Stocks and the Matthew effect

“The rich get richer and the poor get poorer.” This famous adage has its roots in a biblical verse in the Gospel according to Matthew 25:29: “For to everyone who has will more be given, and he will have abundance; but from him who has not, even what he has will be taken away .”
Steef Bergakker, Senior Portfolio Manager
Robeco, Insights, Graph of the Week, 03 July 2020 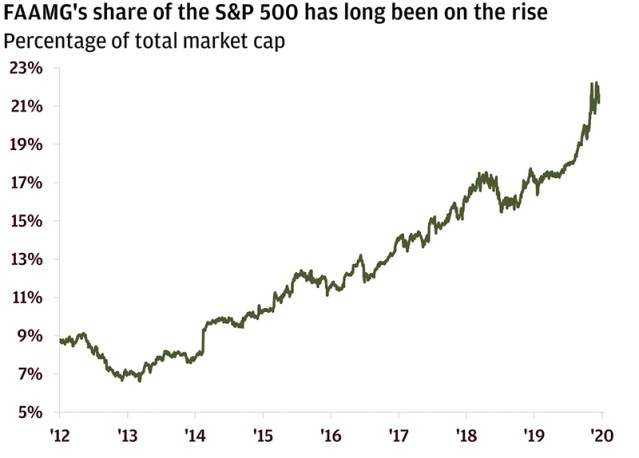 Source: S&P, FactSet. As of April 29,2020. Shows sum of market caps of Facebook, Amazon, Apple, Microsoft and Alphabet as a % of S&P total market cap.

In certain developmental processes, cumulative small advantages that reinforce each other over time will, in some cases, ensure that people or things that have an edge over others from the start, only see that edge grow. People starting off with a disadvantage, however, come into a downward spiral that only sees their disadvantage grow and grow. The phenomenon of a self-reinforcing feedback mechanism is often referred to as the Matthew effect.

It can be applied to all kinds of disciplines. A well-known example, often cited in developmental psychology, is that small differences in reading ability among children can lead to huge differences in cognitive development over time. This, in turn, can be a factor in determining how successful someone is in their adult life. After all, early readers will find it easier to use their reading abilities to quickly pick up new knowledge and will be praised for doing so. This will have a positive effect and encourage them to try even harder. The exact opposite applies to those with reading difficulties.

Economics and the Matthew effect

The Matthew effect plays a role in economics as well. In general, large and successful businesses tend to have advantages that propel them into a positive feedback loop, which only makes them larger and more successful. They typically have access to cheaper financing, do not invest as much in marketing thanks to the reputation they enjoy, and attract talent more easily.

They can also spread their fixed costs across more products and generate more profit, which can, in turn, be invested in future growth. These same factors tend to push smaller and less successful businesses in the opposite direction.

And stock markets often only add to the Matthew effect. Important market indexes will eventually incorporate any large and successful stocks, which increases demand among index funds and trackers. In general, these types of stock are highly tradable, which generally results in a liquidity premium being applied.

Stocks such as these, therefore, tend to outperform average stocks, which, in turn, attracts momentum investors. They receive a higher valuation, which makes it easier for businesses to use their highly valued stock to finance acquisitions. In short, market winners continue to stay ahead of the game because they keep building on their success.

The five largest stocks on the US S&P 500 (Facebook, Apple, Amazon, Microsoft and Google – frequently abbreviated to FAAMG) are an extreme example of this. Their joint index weighting doubled in the past few years and currently accounts for more than 20% of this index.

Although society continues to benefit greatly from the economic value generated by FAAMG, this has not alleviated concerns about the increasing economic power and social impact these giants have on our world. In fact, these companies are currently being investigated by a number of governments seeking to establish whether FAAMG are abusing their economic power.

FAAMG is also coming under increasing societal and political pressure to commit to fulfilling their social responsibilities and obligations. But, the question is: can legislation and regulations alone turn the tide? If we look to the past and the breakup of Standard Oil and AT&T, it would appear that the Matthew effect will remain intact for as long as underlying technologies and their associated growth remain economically relevant.

FAAMG are all proponents of information and communication technologies – the main drivers of economic growth in this era. In other words, if these types of technologies remain dominant, FAAMG will likely continue to profit from the Matthew effect, irrespective of whether the companies are broken up.