Has the Tech Bubble Burst or Just Been Mildly Deflated?

During the last week, several of the mega tech stocks fell between 5 and 10%, but despite falls for example in Tesla, Apple and Amazon, this needs to be seen in the context of where they stood only a few months ago.

The chart below shows the performance in 2020 to the end of last week’s close of the various FANG stocks (Facebook, Apple, Amazon, Netflix, and Google – now called Alphabet) against the MSCI World IT Index.  Whilst the setbacks over the last few days have been dramatic, you can see virtually every US FAANG stock (apart from Alphabet i.e. Google) has:

a) considerably outperformed their global peers and

b) risen considerably – the recent setback represents almost a bump in the context of their recent performance:

The question is not whether these businesses are great companies (most of the companies and their products are excellent), but whether the stock market has overly discounted their future prospects e.g. the companies may grow and beat expectations, but their share prices could still go nowhere over many years.

One business which particularly intrigues me is Apple.  It recently passed the $2 trillion size and became as valuable as the UK’s top 100 companies, combined.  Ironically, when the company was smaller and had more growth potential from its various products, its shares were much lower rated than today when its core market of mobile phones is more mature.

The chart below shows unit sales of the Apple iPhone from 2007 (the future forecast shipments are J.P. Morgan estimates): 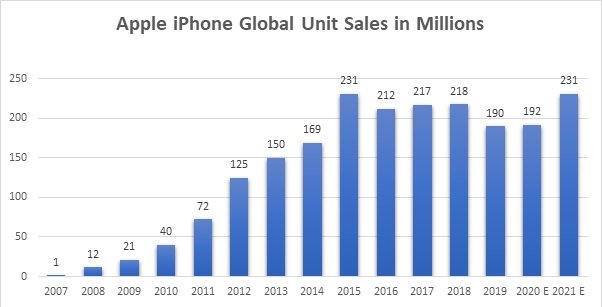 Of course the iPhone is only one component of the Apple growth and valuation, but comparing the entirety of Apple’s revenues with its FAANG peers reveals that Apple is the only stock that has recorded a decline in revenue over this period, with its revenue growth rate not approaching 20% since 2015:

The issue I have is that when growth is high, I would expect a high multiple, but when it is low the opposite.  With Apple the reverse is true – the revenue growth has slowed materially since 2010 but it’s P/E (Price/Earnings) has more than doubled: 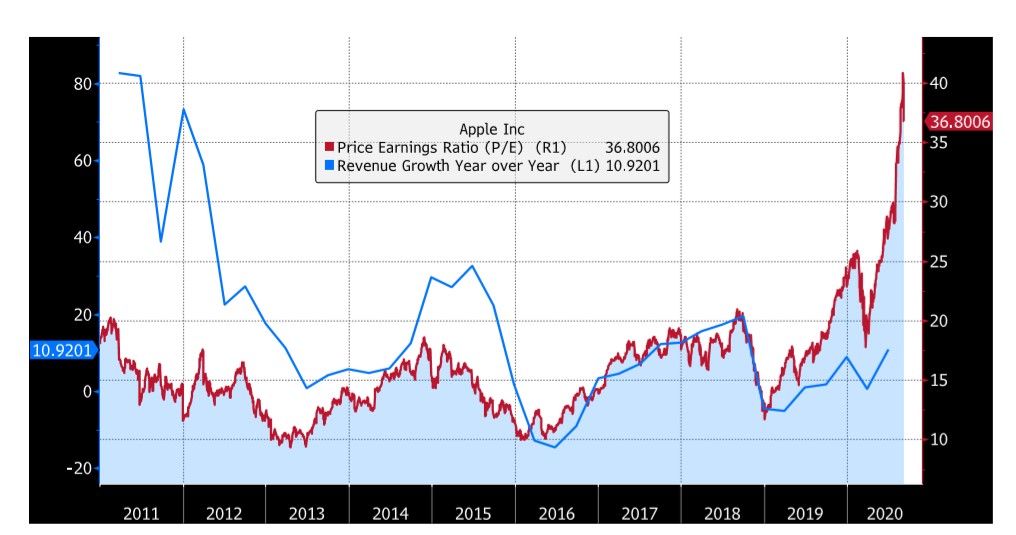 Maybe we should look at it another way – the recent surge in the Apple share price has driven its market capitalisation to $2.068 Trillion vs the $2.09 Trillion for the UK’s largest 100 companies combined (based on their current £1.59 Trillion value and a US$/£ exchange rate of 1.3149).

What does $2 Trillion get you?

Apple is just one example of the over-valuation of many of the mega-cap growth stocks as shown above, based on current forecasts the whole UK market will grow at a similar rate in terms of revenues and a much faster rate in terms of profits over the next 3 years.

Of course, one can equitably argue part of this is simply that most UK revenues and profits have been much worse hit than Apple in 2020 so the bounce back should be more pronounced (FTSE 100 profits forecasts for 2020 have fallen by about 45%).