Asset Allocation after the pandemic

"For much of the post-2008 period, the investment industry has been obsessed with managing volatility and avoiding drawdown"
Dave Fishwick
M&G Investments, Episode, 26 May 2020

We’ve discussed in several posts how the market reaction to the coronavirus outbreak shared many ‘classic’ behavioural traits with episodes of the past: 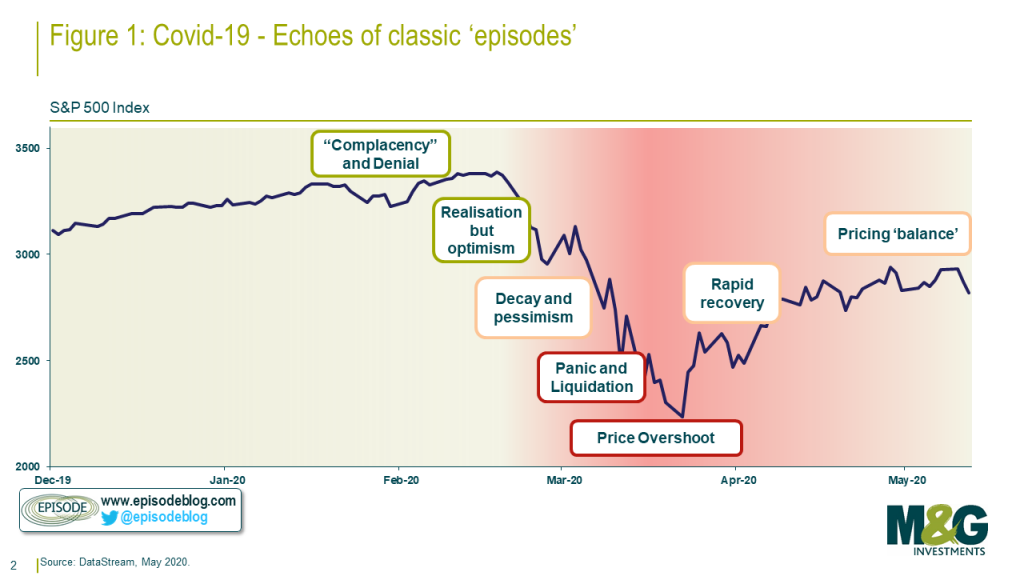 Navigating such a phase successfully has likely involved a far greater reliance on dynamic and tactical shifts in asset allocation rather than upon strategic, value-led observations.

Today, price determination is more ‘balanced.’ The high correlation across assets has diminished, as have the sharp intraday swings and gapping behaviour. The fundamentals begin to matter again, for now. It would seem that at least part of the tactical episodic opportunity that emerged in March has passed.

However, even before the outbreak of the virus my sense was that tactical asset allocation would need to do more of the ‘heavy lifting’ for multi asset investors. The recent phase, in spite of some recovery, has only highlighted and intensified this belief.

A case for dynamism right now

Forecasting whether the near future will bring more volatility than anything like the levels we saw in March lies with the speculators. There has been much talk, particularly among technical analysts, of equity markets retesting their lows. But the level of confidence we can have in such predictions is limited.

We can, however, observe that beliefs are highly fragile. Not only are most of us all fearful after March’s experience, but it is clear that forming any assessment of valuation is deeply challenging.

There is less clarity with regards to the near term earnings picture today, and there is a non-trivial possibility of major shifts in the inflation and interest rate regimes. I have seen very plausible arguments in favour of both inflationary and deflationary regimes after the events of the last three months.

In these environments, in which forming a sense of what an asset is worth is very hard (and ‘model uncertainty’ is high), extreme volatility in asset prices can take hold, since valuation cannot play its usual role as an anchor. At the same time it can be hard to distinguish between how much of this volatility is driven by investor ‘comfort’ with risk, and how is simply a reflection of changes in fundamentals.

At times like this a behavioural framework for reacting tactically to price can be more valuable than usual. However, the real argument in favour of tactical dynamism rests upon the longer term perspective.

A case for dynamism over the longer term

Getting dynamic tactical shifts in response to market volatility ‘right’ is very hard, and over long time horizons can prove to have limited importance to returns. If the prospective returns on a simple mix of assets are high enough, then being dynamic need not be worth the effort for many investors.

Unfortunately even before the COVID-19 episode it was clear that prospective returns on traditional static multi asset portfolios did not look high. In fact, as Tristan Hanson wrote in January, they looked far lower than they have in decades. They have collapsed in this recent phase: 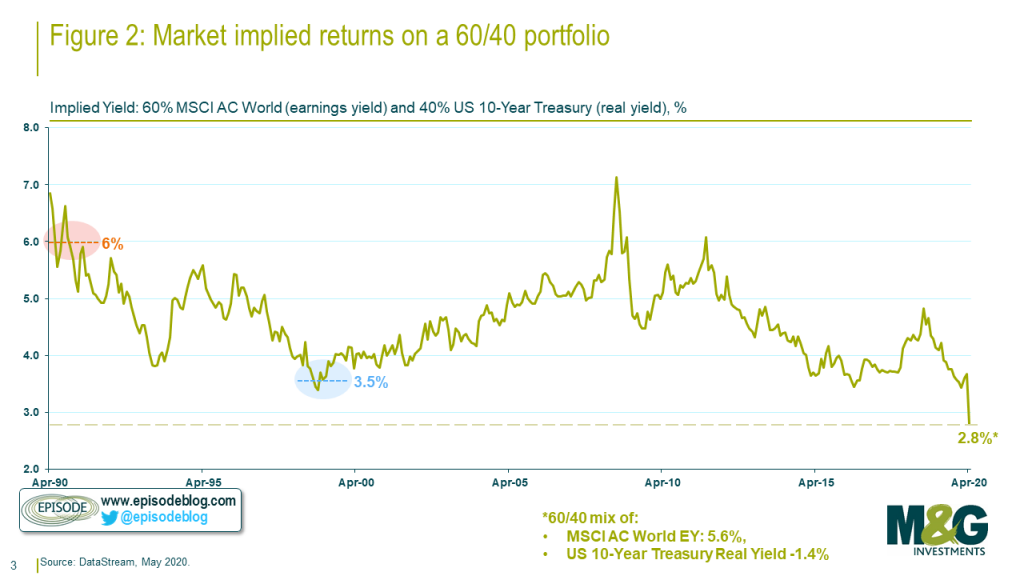 Much of this is driven by the fall in developed market bond (Treasury) yields, but large parts of the equity market are also back to pre-March valuations. This is due to the price recovery noted above, but also the downgrade to earnings expectations.

At these valuations there are profound implications for multi asset portfolio management, both in terms of the returns that can be expected, and the relative importance of being tactical. If lower prospective returns are not associated with lower volatility, then the value to avoiding drawdown and capturing near term market moves becomes far more important.

For much of the post-2008 period, the investment industry has been obsessed with managing volatility and avoiding drawdown, and yet the very experience that made us want that so much (ie. the financial crisis) had actually increased prospective returns to the point that those with a reasonable time horizon were in a position to tolerate volatility to a large extent.

That is not the case today. There is far less of a reward in place for maintaining longer time horizons.

The role of valuation signals

The following charts illustrate this point by looking at some market history.

The first observation is that, while value signals tell you little about short term returns (and particularly so today), over longer time horizons it is very risky to ignore them.

In 1990 a 60/40 mix of global equities and US Treasuries was priced to deliver 6% after (US) inflation. Over the next thirty years this proved a good guide: 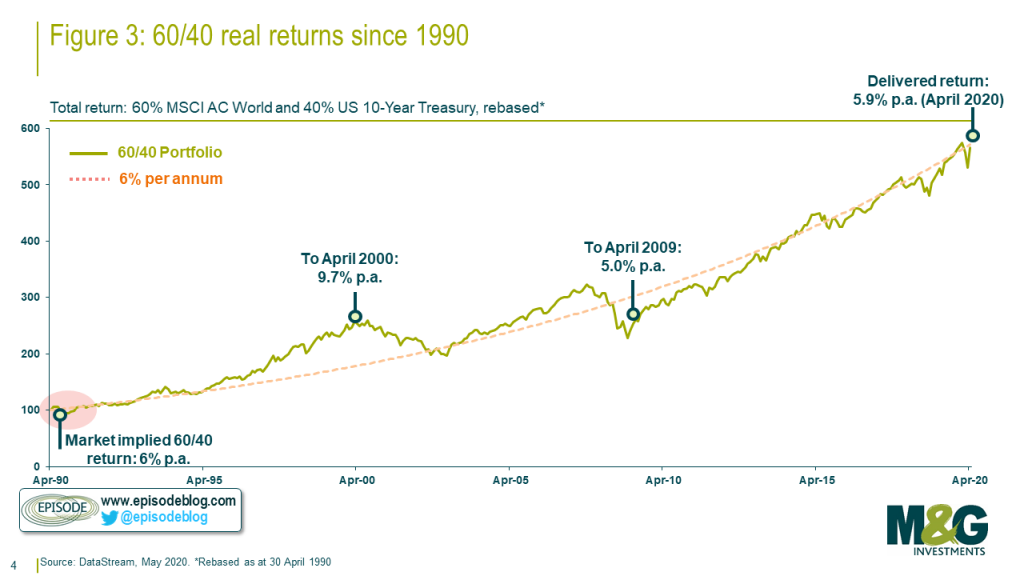 From that 6% starting point in 1990 you haven’t had to worry too much about active asset allocation. Even if you had sold at the depths of 2008/9 you would have realised annualised returns just under 5%.

This isn’t the case when the starting point of valuation is lower. From those points, the need to be active becomes critical.

At the peak of the tech bubble that 60/40 portfolio was briefly priced to deliver around 3.5%. That was a good guide to what you got over the very long term: 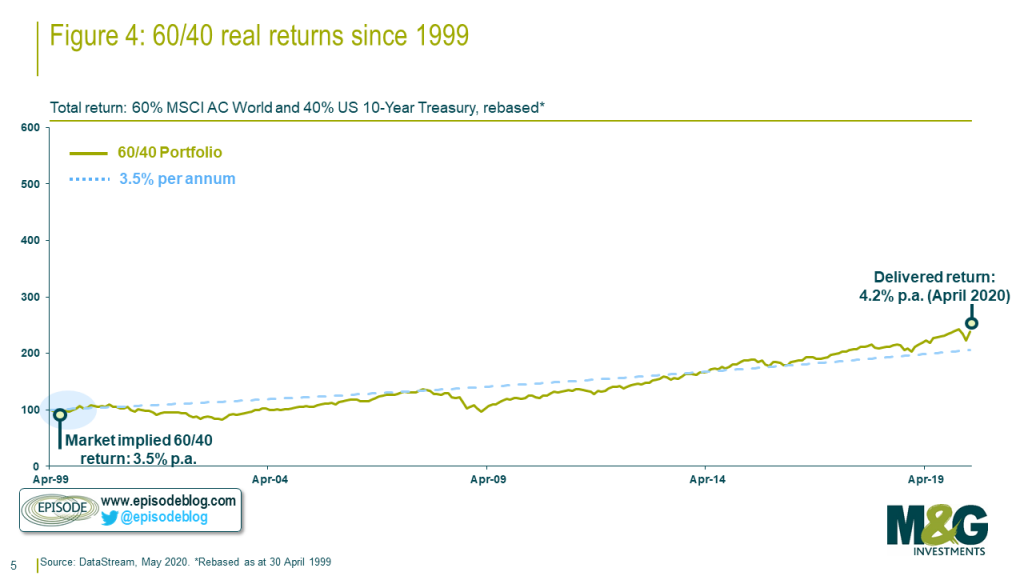 ….but perhaps more importantly for many, the static 60/40 portfolio delivered you nothing in the first decade. The order of returns arguably become more important: the sharp decline in equities at the beginning of the period meant big losses but without taking prospective returns to significantly more attractive levels to compensate. 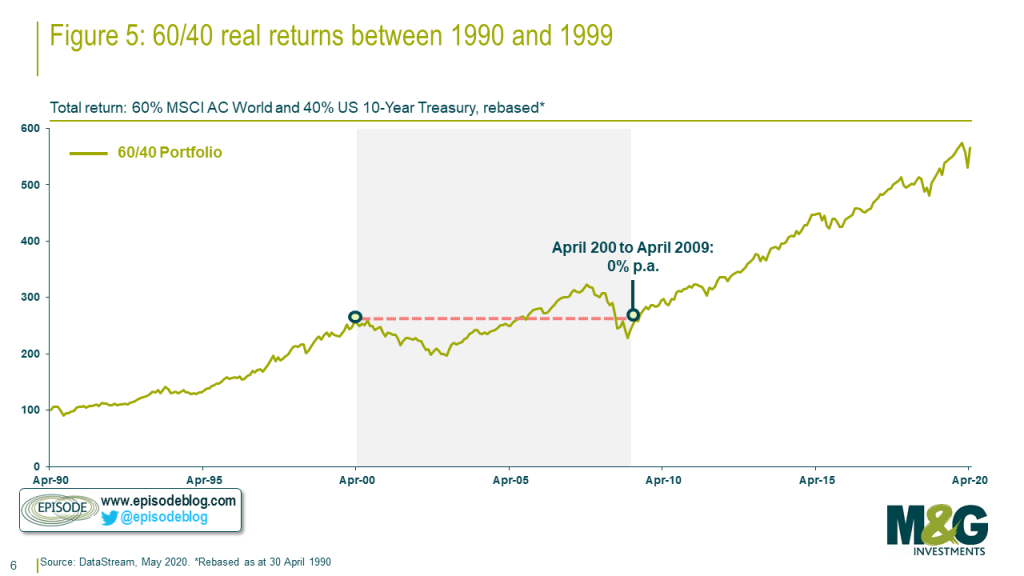 An active decision to avoid equities in 1999 would have saved you a decade of zero returns from a static 60/40. In contrast, while being overweight equity after 2008 would have resulted in superior returns, for many this would be far less important, given how well static multi asset portfolios performed in their own right (and their far lower volatility).

The future. Active and dynamic

As a team, we have been talking about a need for more active asset allocation for several years.

However, ‘active’ does not necessarily mean the same thing as dynamic. An active decision might have been to meaningfully underweight equities in 1999, or underweight bonds after the ‘pivotal moment’ in 2016 – such positioning may go unchanged for several years. These are highly ‘active’ decisions but do not involve ‘acting’ in the sense of frequent adjustments of the key characteristics of the portfolio. Most of the time, making such big, long term calls are the key source of value from active asset allocation.

Today it seems likely that we will also need more ‘acting’ and greater dynamism. Lower prospective returns make the ‘buy and hold’ case for a static mix of risk and rate assets uncompelling. And as March has shown, lower returns do not necessarily mean lower volatility.

Some may argue that a 60/40 portfolio can be expected to be less volatile than the past, since the role of government bonds as a diversifier is more powerful. We would caution against this view, the last few years have clearly shown that we are in an uncertain landscape with regards to the diversification properties of assets. Government bonds can play this role, but as yields become very low they can also be a source of risk as the environment shifts. Rapidly changing diversification properties such as we saw in March only further increase the importance of being flexible.

So it does seem that active multi asset investors need to be prepared to be more tactical both on a longer term view, and potentially in the coming months. Cash rates in the developed world are the major anomaly in markets today. This is significant not only because it explains the lower returns on offer from other assets, but it makes the option of waiting for more attractive returns to returns to become available extremely punitive over anything but very short time horizons. Navigating this landscape will not be as easy as 60/40 investors have become used to over the last few decades.