What caused the housing boom and bust of the early 2000s? Capital inflows from emerging markets to developed economies can contribute to the formation of bubbles in asset prices. Those bubbles encourage the accumulation of debt, and the deleveraging of that debt exacerbates the decline in economic activity when the bubble bursts.

The dramatic decline in housing prices was a key component of the Great Recession. From January 2000 to July 2006, the S&P/Case-Shiller U.S. National Home Price Index grew by 85 percent before shedding 27 percent of its peak value by February 2012. (See Figure 1 below.) Economists have struggled to fully explain this boom and bust in terms of economic fundamentals, such as demographics, construction costs, or interest rates.1 As a result, many observers have described this run-up and decline in housing prices as a bubble. 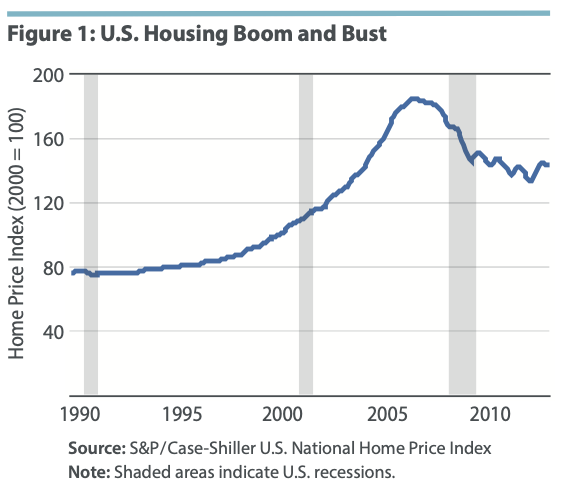 Bubbles form when the price of an asset exceeds its fundamental value. This can happen if buyers are willing to pay a premium for an asset because they expect to be able to sell it for even more in the future. Purely speculative assets may even have no underlying fundamental value — their price is determined entirely by the existence of the bubble. Naturally, bubbles are very fragile. To persist, they require that buyers and sellers expect prices to continue to rise. People will only buy into a bubble if they think they can turn around and sell the asset for a profit to someone else, who will only buy it if he or she expects to resell it for an even higher price. Once this chain breaks, the bubble collapses, and asset prices fall precipitously.

What led to the growth and collapse of the housing bubble in the early 2000s, and why did its collapse have such sweeping effects on the rest of the economy? This Economic Brief argues that global capital flows contribute to the creation of asset bubbles, and those bubbles can fuel growth in debt that magnifies the shock when the bubble bursts.

Since the 1980s, the United States has been a net importer of capital. Countries can finance investments through domestic savings or by importing capital from abroad. When they do the latter, they run a current account deficit. In a global economy, basic accounting arithmetic requires that if one country is running a current account deficit, others must be running offsetting surpluses. In other words, if the United States is borrowing from abroad, other countries must be lending. In recent decades, much of the capital flowing into the United States has come from emerging economies, such as China and oil-rich nations in the Middle East. That trend accelerated in the early 2000s leading up to the Great Recession. (See Figure 2 below.)

As a result, savers in those countries have fewer options for investment, and those investments tend to pay lower returns than assets in developed economies. If countries are open to financial trade, savers in emerging economies would choose to invest in developed economies, exporting capital to those countries. Rising global demand for U.S. assets pushes up their prices and lowers their yields, resulting in lower interest rates in the United States.

Low interest rates help create the perfect environment for the formation of bubbles. Domestic investors in the United States, facing lower returns on traditional assets, may choose to speculate on riskier assets in search of higher returns. Such widespread speculation can fuel the emergence of bubbles.

Two of the authors of this Economic Brief (Ikeda and Phan) explore the relationship between global imbalances and bubbles in a recent article in the American Economic Journal: Macroeconomics.3 They model a setting with two open economies, which they call the North and the South. The North represents the United States, and the South represents emerging economies, such as China. The only difference between the two countries in the model is that the North is more financially developed than the South.

When the two economies are integrated through trade, Ikeda and Phan find two major effects. First, capital flows from the less financially developed South to the more financially developed North. Investors in the South are attracted to the higher rates in the North, which are a result of the greater financial sophistication of the North. But the influx of capital from the South lowers interest rates in the North. This fuels the development of bubbles in the North, Ikeda and Phan's second finding. Falling rates in the North make it more attractive for investors there to engage in speculation. The growth of bubbles, in turn, makes it even more attractive to invest in the North, inviting further capital flows from the South, which fuel more bubble growth. Thus, in the model, global imbalances in capital flows lead to the emergence of bubbles, and those bubbles further exacerbate global imbalances, which feed greater bubble growth.

In the past, some economists have argued that bubbles are unlikely to emerge in developed economies, such as the United States, because their financial markets are efficient.4 But Ikeda and Phan's model suggests that, even if a developed country, such as the North, has efficient financial markets, bubbles still can develop if the North is financially integrated with the inefficient markets of the South.

Ikeda and Phan next study what happens to the North's economy when a bubble bursts. They don't model a specific trigger for the bubble's collapse, but, as noted earlier, bubbles are fragile. Any breakdown in expectations of rising prices among buyers and sellers would cause it to collapse. Their model predicts that aggregate investment, output, and consumption increase in the North during the boom phase when the bubble is growing. The increase in wealth during the boom phase prompts consumers and businesses in the North to take on more debt, and that additional leverage becomes a weight on the economy when the bubble bursts. Deleveraging during the bust further reduces consumption and investment, resulting in a bigger drop in aggregate economic activity than if the bubble had burst in a low-debt environment. This observation from the model matches the housing boom and bust of the 2000s, which also exhibited a concurrent boom and bust in credit. (See Figure 3.)5

The model developed by Ikeda and Phan supports the "saving glut" hypothesis advanced by Bernanke. Interpreting the events of the early 2000s through the lens of the model, capital inflows from emerging economies, such as China, contributed to falling interest rates in the United States, which in turn helped fuel the emergence of a bubble in housing. The growth in housing wealth prompted U.S. businesses and consumers to take on additional debt. The eventual collapse of the bubble slowed these capital inflows and depressed economic activity in the United States, and that shock was exacerbated by the overextension of credit that accompanied the run-up in asset prices. This research illustrates how global imbalances in capital can contribute to financial instability in developed economies.

1 Atif Mian and Amir Sufi, House of Debt: How They (and You) Caused the Great Recession, and How We Can Prevent It from Happening Again, University of Chicago Press, 2014. Robert J. Shiller, Irrational Exuberance, third edition, Princeton University Press, 2015.