I stopped in a local antique shop over the weekend. The owner is retiring and trying to clear out as much as she can before they close the doors so I paid a mere $3 for the Life magazine above. I think it might be worth many multiples of that price for investors who think our situation today is somehow uniquely bad. The cover headline could just as easily be describing today as 1970.
Joseph Y. Calhoun III
Alhambra Investments, Weekly Market Pulse: The More Things Change… September 5th, 2022 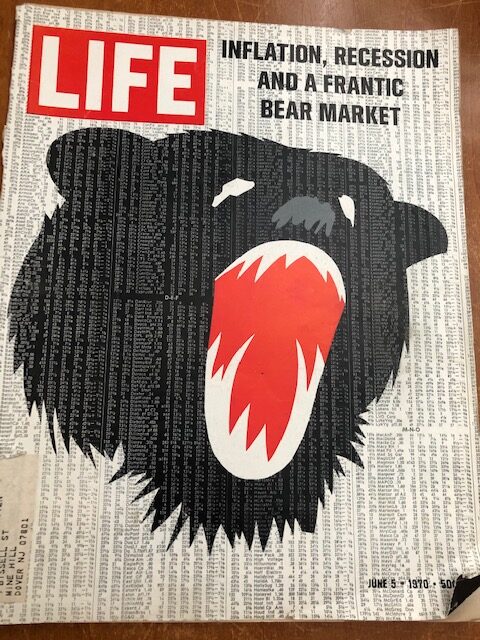 I stopped in a local antique shop over the weekend. The owner is retiring and trying to clear out as much as she can before they close the doors so I paid a mere $3 for the Life magazine above. I think it might be worth many multiples of that price for investors who think our situation today is somehow uniquely bad. The cover headline could just as easily be describing today as 1970.

The year 1970 was a tough one for America. Inflation averaged around 6% that year, although it had already peaked by the time of this Life issue. The stock market peaked in December of 1968 and was already down 15% by the start of 1970. It would go on to lose a total of 34.9% by the time it made its low on May 26th, just before this issue was published.

We had political turmoil at home with 4 college kids killed at Kent State and we also heard the verdict for the Chicago 7 in February, where Jerry Rubin, Tom Hayden, and Abby Hoffman were all acquitted of conspiracy but convicted of inciting a riot (all of which were overturned on appeal). Back in ’67, Hoffman had led the so-called Yippies on Wall Street protest, throwing dollar bills from the balcony of the NYSE to protest capitalist greed. Occupy Wall Street wasn’t new.

We had geo-political intrigue abroad as Nixon widened the Vietnam war to Cambodia. And we had financial problems as well with the bankruptcy of Penn Central in the same month as this Life cover. Penn Central was the 6th largest company in the country and its bankruptcy was the biggest in American history at that time.

Short-term Treasury rates peaked early in the year with the 1-year Treasury yield topping at 8.4% right at the end of ’69. Long-term rates were more stubborn with the 10-year topping out the same day the stock market bottomed on May 26th. The peak 10-year rate that year was 8.2%. The yield curve (10-year/Fed Funds) inverted in August of the previous year at a max inversion of -3.9%. Yes, you read that right. Modern pundits fretting about an inversion of 40 basis points have no sense of history.

What do we learn from this history lesson? Well, most obvious is that our current situation isn’t unique at all. Markets have dealt with high inflation and an aggressive Fed before. It also highlights how hard it is sometimes to figure out where the economy is in real time. The 1969/70 recession wasn’t called a recession by the NBER until early 1971, after the recession had already ended. There was a lot of discussion at the time about whether it even was a recession. Sound familiar?

Another lesson is that stocks, like all markets, anticipate. The market bottomed in May when interest rates peaked even with the most negative quarter of the recession still ahead. And stocks don’t have to get “cheap” before finding a bottom. The S&P traded around 17 times earnings that year, down from around 22 before the bear market started.

We think today of meme stocks as something unique but the 60s were called the go-go 60s for a reason. The Nifty Fifty, the glamour stocks, the concept stocks, the conglomerates, and the “gunslinger” fund managers who touted them were rock stars. George Tsai was the Cathie Wood of the day. When the Nifty Fifty finally expired in the early 70s, they had P/Es that rival anything seen today with Xerox at 49 times, Avon at 65, and Polaroid at 90.

2022 will not be a replica of 1970 because there are differences between the two periods, mainly that the conditions back then were, if anything, worse than today. But there are some things that don’t change. It isn’t a coincidence that the rally off the June lows this year started when interest rates peaked just as it did in 1970. Interest rates are important for their role in how we value stocks but why they move up and down is less important than the fact that they do.

There is truly nothing new under the sun or in markets. There are no new eras if you know history. Markets have been here before even if today’s participants haven’t. And that is always true too; there were traders in 1970 who had never been through a bad bear market. The last bear market in 1966 only lasted 8 months and stocks fell just 22%, barely even qualifying for the bear label. The last bear market with a drawdown of more than 30% had been way back in 1942.

This bear market, like all others before it, will come to an end. It may be soon or it may have more to run but markets and investors have survived much worse conditions than what we face today.