Economic Crisis and Political Disorder after the Panic of 1837

For a while, it seemed impossible to lose money on real estate. But then the bubble burst. The financial sector was paralyzed and the economy contracted. State and federal governments struggled to pay their domestic and foreign creditors. Washington was incapable of decisive action. The country seethed with political and social unrest. In America's First Great Depression, Alasdair Roberts describes how the United States dealt with the economic and political crisis that followed the Panic of 1837.

As Roberts shows, the two decades that preceded the Panic had marked a democratic surge in the United States. However, the nation's commitment to democracy was tested severely during this crisis. Foreign lenders questioned whether American politicians could make the unpopular decisions needed on spending and taxing. State and local officials struggled to put down riots and rebellion. A few wondered whether this was the end of America's democratic experiment.

Roberts explains how the country's woes were complicated by its dependence on foreign trade and investment, particularly with Britain. Aware of the contemporary relevance of this story, Roberts examines how the country responded to the political and cultural aftershocks of 1837, transforming its political institutions to strike a new balance between liberty and social order, and uneasily coming to terms with its place in the global economy. 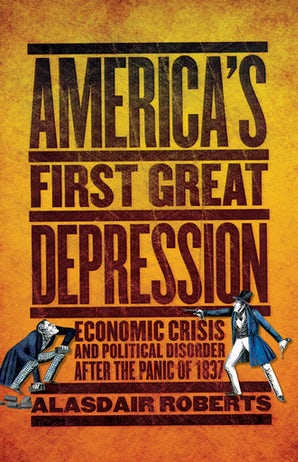 Alasdair Roberts is Professor of Political Science at the University of Massachusetts Amherst, and Director of its School of Public Policy. He is also a Fellow of the US National Academy of Public Administration. He holds a law degree from University of Toronto as well as a PhD in Public Policy from Harvard University. His web address is http://www.aroberts.us