Payrolls Like GDP: Headlines Good, Underneath Really, Really Not

If the unemployment rate reaches zero and wages still don’t explode higher, the economy falls off, will Economists, central bankers, and the media stop relying on this one statistic for overall economic interpretation?
Jeffrey P. Snider
Alhambra Investment Partners, May 3rd, 2019

You can be reasonably excited when the unemployment rate falls below 5%, as it did four years ago. Three point six, however, that’s something else entirely. We’ve long since moved into the range where there should be no doubts.

On this typically absurd payroll Friday, the BLS reports two headline numbers which have made the front pages. The Establishment Survey increased by 263k in the month of April 2019. Better than expected and as far as green shoots go it’s not perfectly blowout green but a shade close enough. The other headline seems awesome until you think about it. 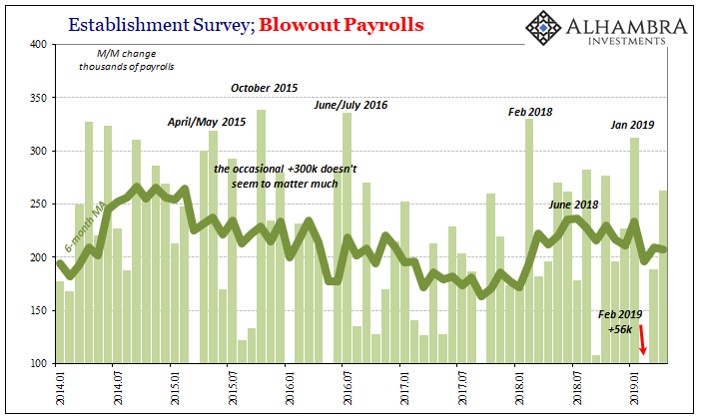 How can that possibly be bad? 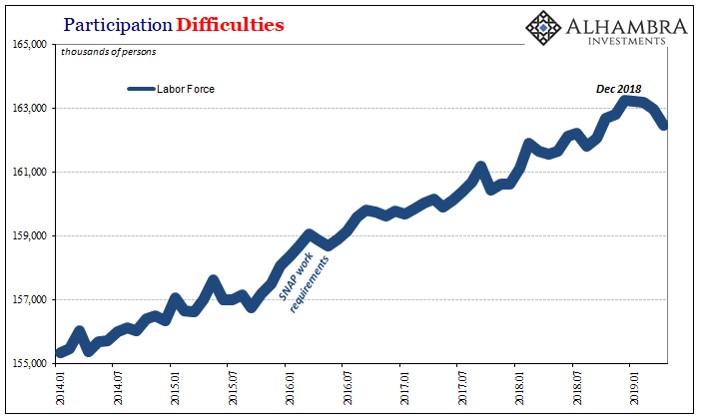 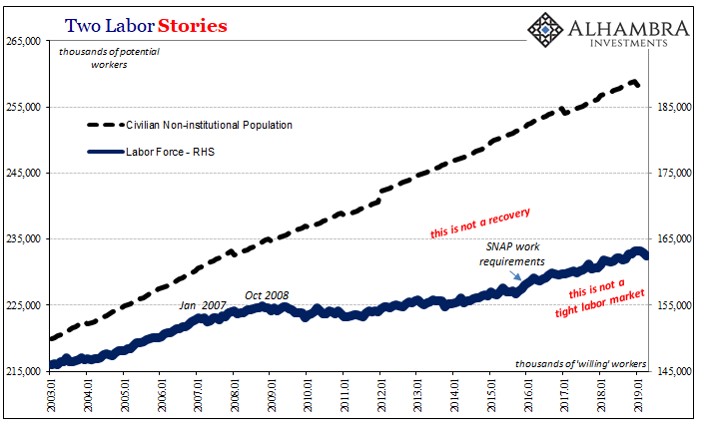 It’s driven entirely by people falling out of the labor force. The same large-scale participation problem writ small just in time for the serious economic uncertainties of 2019. Since December, 770k have suggested to the BLS they are no longer in the market for a job. It’s a big number.

This may not seem to jive with the Establishment Survey, but it does with the Household Survey from which the unemployment rate is derived. The number of persons reported to be employed in this other measure of the job market has noticeably flat-lined. Not for a month or two, either, but now seven months and counting.

That much time without growth isn’t growth. 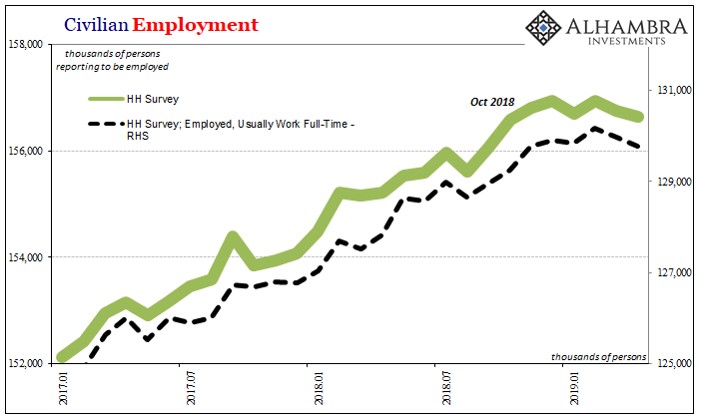 Even though employment as measured by the Household Survey is down slightly, in the same months the labor force has declined a lot more. The unemployment rate therefore drops to the lowest in almost half a century, having been made low already by the very same economically backward dynamics.

It offers both corroboration of that view as well as a big clue why. The estimated number of civilians reporting to work full-time has declined slightly since that October-December window. And that decline has not been offset by a commensurate rise in part-time employed persons.

This would suggest that companies have instituted something like a hiring freeze, skipping past cutting hours. Either way, the total number of hours worked stops growing, or at least slows remarkably. The monthly BLS series measuring total hours included with the payroll reports is picking up the same trend. 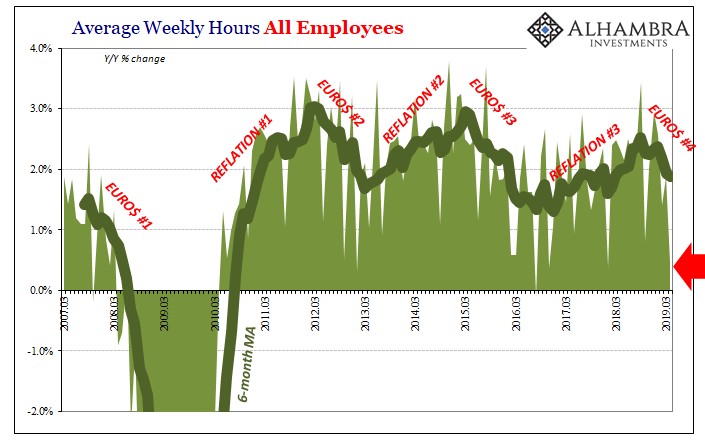 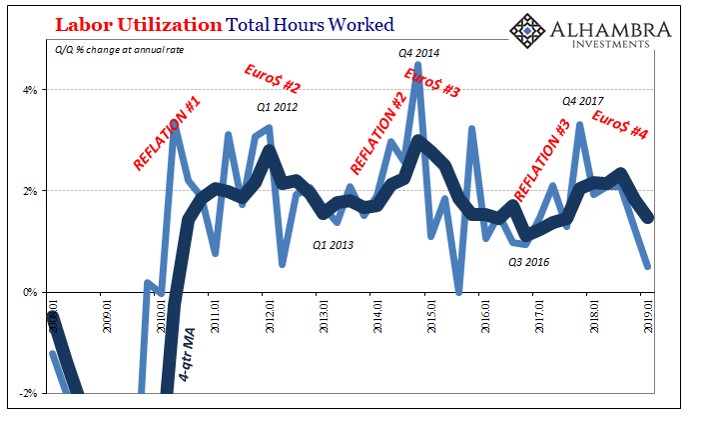 Wage growth unsurprisingly remains unusually muted. Average Hourly Earnings were up 3.37% year-over-year in April, the fourth straight month at a rate less than December’s highest in a decade. Like everything noted above, it suggests a change in direction – slack-wise 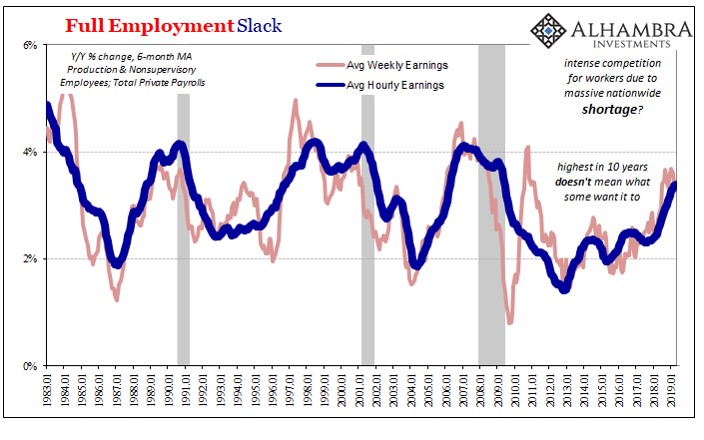 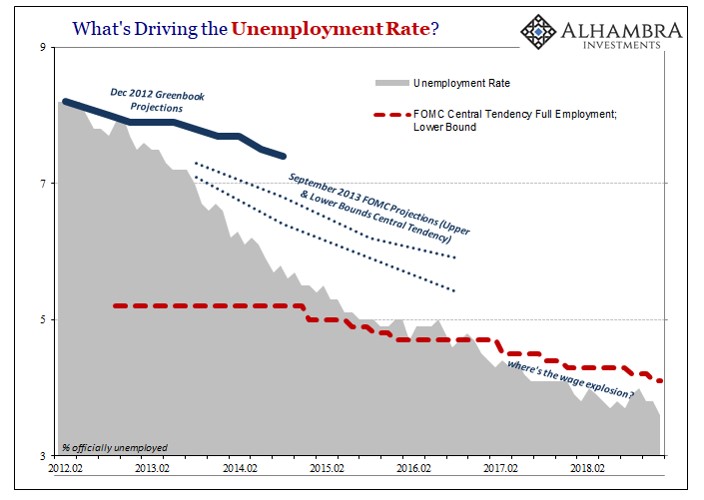 An unemployment rate that’s the lowest in fifty years isn’t consistent with wage growth that can’t manage 4%. It’s not like this is a new development, either. The unemployment rate has been less than estimated “full employment” for years. An epically, historically tight labor market, as is suggested at 3.6%, leads to decelerating wages at 3.5% tops?

Not only are we being asked to believe that, we now have to find some other (stupid) reason why the labor force is again shrinking (sharply) while this is happening. By the unemployment rate view, businesses are going out of their minds trying to find workers. Incredibly, creatively desperate for them.

Maybe, just maybe the unemployment rate is totally misleading. Not just in the big sense of the ongoing, decade-long participation problem, more immediately about where the economy is heading in 2019. The big picture means in the near-term context a much weaker economic starting point for what sure seems to be the next downturn already registering in the BLS data below the headlines.

Look at the Household Survey data above, and then recall what was underneath the headline Q1 GDP report: 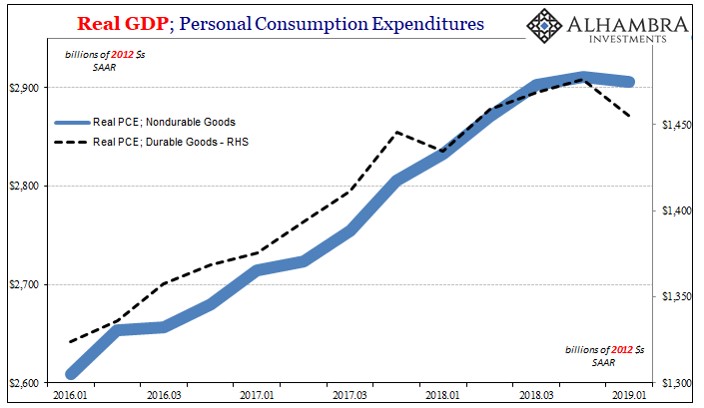 And let’s not forget Personal Income and Spending (emphasis on the former), estimates also compiled separately by the BEA: 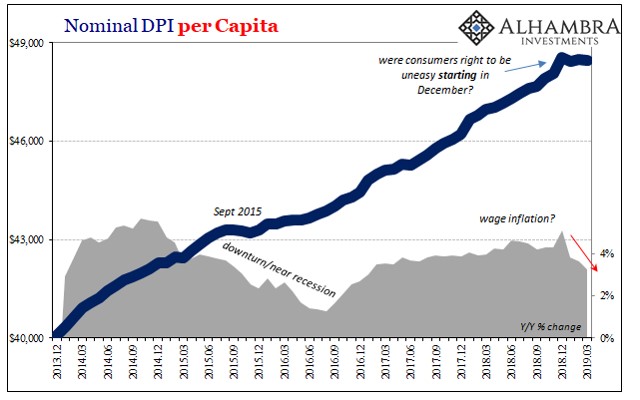 There is a consistent picture of the US economy emerging in 2019 that isn’t anything like the headlines. Euro$ #4 is already showing up in the domestic labor market like it already has throughout the rest of the world. By view of the unemployment, that’s impossible. The rate keeps going lower and yet it is weakness that is spreading far and wide.

We are left with what I wrote yesterday:

Not to worry, Powell says at his press conference, because it’s all transitory. Behind that otherwise alarming shift [consumer and business spending] is the labor market. “Job gains have been solid, on average, in recent months, and the unemployment rate has remained low.” See? So long as the labor market is this way, any sort of weakness can only be a minor speedbump on the road to full recovery.

What if the Establishment Survey’s job gains and the half-century low unemployment rate mean nothing? Then the very thing officials, Economists, and the media are all counting on for a rebound, labor market strength, the underlying good which will push the economy out and away from weakness they’ve recently been forced to very reluctantly acknowledge, it’s not actually there. What that would leave us with is only the meaningful downshift.

Rate cuts would be more likely than they would have you believe. It could only be more obviously irrational if the unemployment rate was 2.6% or maybe 1.6%. At this point, why not zero?