Part 1: Our Evaluation of the Global Economic Cycle 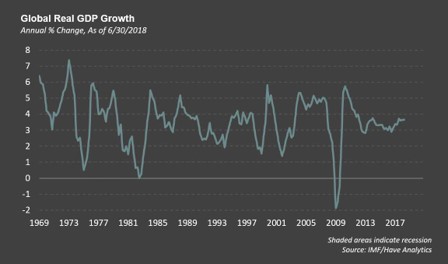 This June, the current economic expansion will end up being the longest in post-war history. Therefore, it's natural to ask, “Are we headed into a recession later this year or in 2020?” It’s a tall ask to evaluate whether a global recession is coming, and a logical place to start is by understanding where we are in the global economic cycle, because that has investment implications. This two-part series outlines the bull and bear cases for global growth, and then explains how the data informs our investment thesis and outlook.

The Bullish View of the Global Economic Cycle

The bullish argument starts with the observation that economic cycles don't end simply because they get old. For example, the economies of Japan, Australia, Sweden and Italy did not experience recession in the immediate post-war period from 1948-1973, although this entire period was not captured below (see Chart 1).

Are There Excesses in the Market?

The second criteria would be is there a major misallocation of capital? In other words, is there an excess somewhere that is likely associated with excessive debt creation that could become systemic in nature and really have broad implications for demand? There are pockets of that today.

Debt levels have gone up materially in the last decade within the U.S. corporate sector. By the corporate sector, I mean non-financials because the financial system has been doing mostly the opposite. Debt levels have gone up in corporate America, and some of that has been to buy back equity. So, it's been more financial engineering, and some of that has gone into investment spending as well. By some measures investment spending as a share of gross domestic product (GDP) is near cycle highs. The U.S. is later in the cycle on that basis, which is a vulnerability. But it's also worth noting that debt service payments are still much lower. Interest rates have come down. Even though corporate America has borrowed more money, actual interest costs have not risen all that much. When compared to previous cycles—and thinking about 1999 and 2000—there was a clear misallocation of capital in the technology sector. Massive over-investment associated with excessive debt creation in that sector led to a global recession. The last cycle in 2007-2008 certainly had excessive debt creation in housing—not just in the U.S. but in many parts of the world—which led to a very significant misallocation of capital and hence the global growth contraction that followed in 2008-2009.

We could also point to a fair amount of credit creation in China over the last decade. That debt has increased and gives us some cause for concern as well; however, a lot of the debt is more public in nature. It's been issued by state-owned enterprises and because it's more governmental in nature, that debt can be handled and absorbed by the government’s generous balance sheet. We don't think the risk becomes systemic.

Beyond those two factors, it’s also worth noting that the economy never experienced a global boom in this expansion. One of the best ways to see this is by looking at the global PMIs in both the 1990s and 2000s cycles. After the recessions we experienced during those periods, PMI numbers reached some very elevated levels (see Chart 3).

In this cycle, we haven't seen this happen at all. There was the severe contraction in 2008, and while global growth rose in 2009—and by proxy PMI numbers—it was more muted when compared to previous periods. If there’s no boom, it’s less likely to bust, which also mitigates the risk of a recession this time.

We have also seen two-year rolling slowdowns in this cycle. When recovering from 2008, the global economy improved into 2010 and then slowed down in 2012, catalyzed by the sovereign crisis in Europe. Then growth started to improve into 2014 and slowed again in 2016, this time because of the slowdown in China and emerging markets. There was another acceleration into 2018 and the resulting slowdown we're in the midst of now. These rolling slowdowns have helped extend the cycle because of the periodic cleansings that reset and remove some of the excesses that may have been built up along the way.

Looking at how policymakers are behaving suggests the current slowdown is likely to be transitory. In particular, the Chinese have significantly changed their policy stance. There has been a meaningful reduction in interest rates in China, a reduction in the reserve requirement ratio for the banking system, an acceleration in infrastructure spending, and several announced tax cuts (see Chart 4). 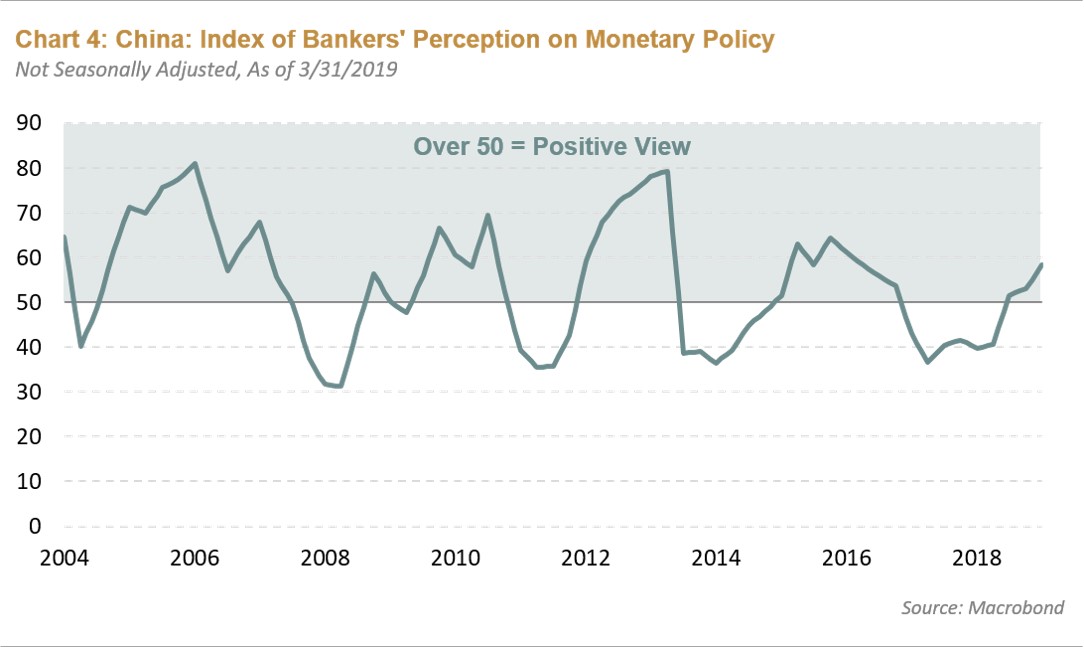 These factors should support activity in China—likely into the second half of this year. It won’t be as powerful a round of stimulus as we saw back in 2016 or in 2009, but it's nevertheless meaningful enough to change the trajectory of growth to the upside.

In the U.S., the Fed has paused its monetary cycle and it’s going to stop balance sheet reduction sooner than most were expecting. That in and of itself is not an easing of monetary policy, it's just less tightening. The concurrent fall in interest rates, a more dovish Fed, and slower U.S. economy have collectively led to a meaningful decline in mortgage rates. The housing slowdown that we saw through much of last year has started to reverse. Recent existing and new home sales in the U.S. have picked up. The U.S. economy is responding as it tends to when rates fall.

The very sharp deceleration in global trade volumes in recent months has been a source of concern. It could indicate that global demand is slowing at a rate consistent with a recession. Or we could make a different argument that there was some inventory buildup by companies around the world in 2Q and 3Q of 2018 ahead of tariffs that were being introduced by the U.S., and then China as well. That accumulation of inventory then led to the destocking we're seeing in the last few months. When averaging out that entire period, the deceleration in trade is more moderate than what recent data suggests.

That's a bigger picture view of why a global recession is unlikely to occur. In part two of this blog, I’ll cover the bearish view of the economic cycle and conclude with how we are incorporating these themes into our investment positioning and outlook.