This should translate into a resurgence in demand for commodities, along with earnings growth well into double figures for companies, adds Jeroen Blokland, Head of the Multi-Asset team.

“The global economy is recovering and looks likely to strengthen further,” Van der Welle says. “Equally important, this recovery is starting to look different from those we have become used to in recent decades.”

“The strong focus on fiscal stimulus aimed at boosting the real economy instead of monetary stimulus aimed at stabilizing the financial sector makes this more of an ‘old school’ recovery, in our view. Old school, as in the real economy starts to gradually take center stage in the macro news flow, spurred by positive multipliers from past and future extraordinary fiscal and monetary stimulus.”

The recovery has begun

Evidence suggests that the recovery is now well underway, with 5.5% global GDP growth predicted in 2021 compared with a 4.4% contraction last year, according to the IMF’s January 2021 World Economic Outlook. This is an upgrade of 0.3% from its previous forecast.

The expected recovery in global trade is a specific tailwind for export-oriented economies. After the 8.8% decline last year, the Dutch Central Planning Agency expects a global trade rebound of 6.6% in 2021.

“With vaccinations having started in many countries, we are gradually moving towards herd immunity,” says Van der Welle. “Consequently, economic growth is set to overshoot the trend.”

The biggest bang for the buck

“In the US, it is starting to become clear that the Biden administration will search for ‘the biggest bang for the buck’. The new US Treasury Secretary Janet Yellen said the government needs to ‘act big’, with a focus on those who are in greatest need and have a high marginal propensity to spend.”

“This stands in sharp contrast to the aftermath of the global financial crisis (GFC), when the financial system instead of the real economy was the focus of government support. This time around, available fiscal space is not just being used forcefully, but is also largely being redirected to address the steady rise in inequality, especially in the US. The strong focus on the demand side there is visible in measures such as direct cash payments to households, job retention schemes and unemployment insurance.”

“Thus, the boost to real GDP from each government dollar spent could very well be larger compared to the post-GFC recovery. We expect continuous fiscal support in both the Eurozone and the US.”

Both have already pledged such support, led by the USD 1.9 trillion stimulus bill proposed by President Biden and the EUR 750 billion European Recovery Fund set to be distributed in the second half of 2021. But who will actually be spending this money, and where?

“As the possibility to spend in the real economy emerges on the back of reopenings in the second and third quarter of 2021, we firmly believe that global consumers and producers are willing and able to spend excess savings as employment improves and consumer risk aversion drops,” says Van der Welle.

“As lockdown measures are eased and economies gradually reopen, albeit under some form of toned-down social distancing, demand for traditional services that require in-person interaction such as high street retailers, hospitality and leisure will increase. Thus, the real economy will start to catch up with the already elevated activity levels of the digital economy.”

Commodities are back in play

So, what does this mean for investors? “With extraordinary amounts of fiscal stimulus aimed at boosting the real economy, commodities have come back into play,” says Blokland. “This was the main reason why we initiated a long position in commodities in May last year. Even after a 15% rally, recent developments suggest that the commodity rally has further to go.”

“A significant part of the fiscal stimulus is direct aid for businesses and consumers. Historically, a rise in social benefits has been accompanied by a rise in commodity prices. In addition, fiscal stimulus is likely to be proactively aimed at lower-income households. These households consume more goods by volume, further underpinning demand for commodities.”

Stimulus could trigger a rise in capex by companies

“Fiscal stimulus also offers a way of accelerating the realization of sustainability targets. China’s ambition to become carbon neutral by 2060 and President Biden’s climate plan targeting USD 1.7 trillion in spending over the next ten years are just a few examples of this. The ever-increasing awareness of global sustainability challenges will result in a green capex wave in the coming years. This, too, will translate into strong demand for commodities.”

“Finally, commodities provide a hedge against both a lower US dollar and higher inflation. The combination of global economic recovery, extremely loose financial conditions and somewhat extended valuations is likely to push the dollar gradually lower. Commodity prices rise when the dollar falls.”

The old school recovery is likely to benefit equities as well, as it magnifies the expected spike in earnings growth,” Blokland says. “Our analysis shows that earnings growth is especially strong in the expansion phase of the business cycle, which we have just entered.” 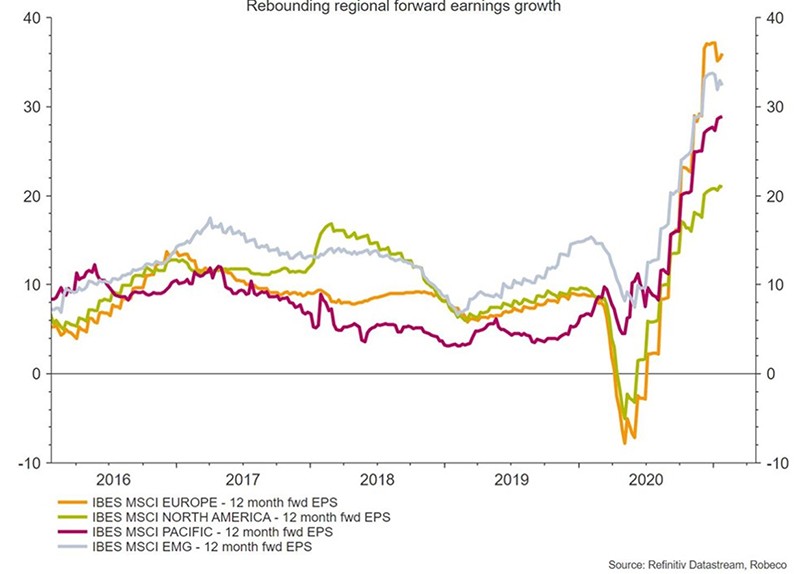 “Massive amounts of fiscal stimulus will function as an earnings multiplier too. For the MSCI World All Countries Index, earnings growth of roughly 25% is expected. In regions with high operational leverage – Europe, Japan and emerging markets – expectations are as high as 36%, which we believe is achievable.”

“As a result, earnings growth will be the main driver of equity market returns going forward, especially since valuations in some parts of the market (though certainly not all) have become elevated. This is also why value stocks and equities from outside the US, which are cheaper and have lagged significantly, have more upside from here.”