As sovereign wealth funds shift their vast portfolios into new asset classes, such as real estate, infrastructure and private debt, perceptions of these investment behemoths are beginning to change.
Aviva Investors,  7 February 2022

It has been a tough few years for sovereign wealth funds (SWFs). The collapse in oil prices that began in mid-2014 ripped holes in government budgets across the Middle East, where many of these funds are based. 1Malaysia Development Berhad (1MDB), a Malaysian state-owned investment vehicle, is being investigated by authorities across the globe after allegations of corruption on an epic scale. And the billions housed in Libya’s SWF have been the subject of a high-profile tug-of-war between two governing factions. 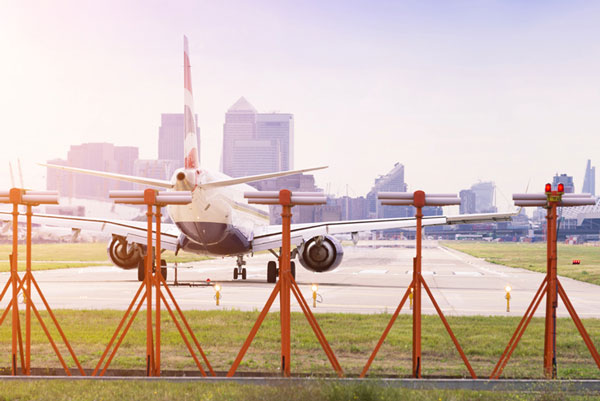 The cases have attracted damaging headlines and tainted the public perception of government investors. Not all SWFs are alike, however. The term ‘sovereign wealth fund’ encompasses a diverse range of institutions: some are commodity-rich newcomers, others decades-old market operators with no connection to oil; some are secretive about their operations, others are open and transparent; some rely on external asset managers, others run sophisticated investment teams of their own.

What is incontestably true is that these organisations wield a significant and growing influence in the financial markets. SWFs’ assets under management stand at nearly $6 trillion, up from $650 billion in 2002. And the nature of their investments is changing. SWFs that once divided their capital between fixed-income and long-only equity positions are now investing more adventurously in real estate, infrastructure and private-market debt.

“Sovereign wealth funds are investing more of their assets in private markets to diversify their portfolios and gain access to higher yields,” says Enrico Soddu, Head of Data at the London-based Sovereign Wealth Center (SWC), which tracks the industry. “They are increasingly looking beyond traditional ‘60-40’ allocations to bonds and equities.”

SWC data shows private-market investments now account for 28.6 per cent of SWF portfolios, up from 12 per cent in 2007 and 9.4 per cent in 2002. This trend illustrates what sets most of these funds apart from other institutions: not shadowy political agendas, but decades-long investment horizons and a freedom from defined liabilities. Taking the long view, SWFs are able to gain exposure to illiquid assets and invest against the grain.

During the stock-market turmoil of early 2016, SWFs were criticised for contributing to the volatility; media outlets accused the funds of selling assets en masse to support their cash-strapped governments following the collapse in oil prices.1 But there is little evidence to support this assertion. SWFs’ overall assets under management actually rose between 2014 and mid-2016, from $5.6 trillion to $5.8 trillion, despite the plunge in oil prices, and there have been few major divestments.

Where SWFs have sold out of positions or redeemed investment mandates, the reasons go beyond plunging oil prices. Among them is the fact that SWFs are becoming more discerning about their relationships with external companies. Soddu says that while SWFs will continue to use external managers, they are increasingly looking for more tailored, mutually-beneficial partnerships that recognise their unique requirements. “SWFs still need external managers, but they are now using them to access specific market niches.”

Traditionally, SWFs maintained conservative asset allocations that relied heavily on equities and fixed income. But they are increasingly moving into alternatives as government bonds, the traditional cornerstone of their portfolios, become less lucrative. Because of their long-term investment focus and lack of defined liabilities, many SWFs have the capacity to take on significant real-estate allocations.

The world’s biggest SWF, Norway’s gargantuan Government Pension Fund Global, is a case in point. Since it was founded in 1996, the fund has largely focused its efforts on bond and equity investments – it owns more than one per cent of all global listed shares – but the fund is now building a sizable property portfolio. Norges Bank Investment Management (NBIM), the arm of the central bank that manages the fund, has gobbled up huge swathes of real estate in London and the US.

“Traditionally SWFs have chosen to invest in the most transparent real estate markets,  such as London, New York and Paris, and they have tended to target offices and luxury hotels,” says Chris Urwin, Global Research Manager, Real Estate at Aviva Investors. “The illiquidity premium available on real estate relative to other asset classes suits them, because they can afford to lock up capital for a long time. They could potentially allocate far more to real estate than they do currently.” 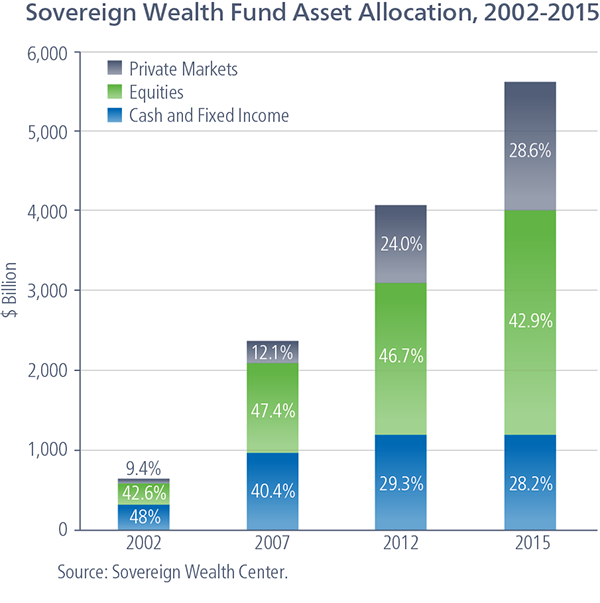 Other SWFs are allocating huge sums to motorways, railways and energy-distribution networks. Increasingly, the funds are collaborating on big infrastructure deals to spread risk and to cement relationships with their peers. The Kuwait Investment Authority was part of a consortium that acquired London’s City Airport for £2 billion in February, while the China Investment Corporation and Australia’s Future Fund were involved in a $7.3 billion deal for a container-ship port in Melbourne in September.

“The investment objectives of sovereign wealth funds aren’t the same as other long-term institutional investors, such as pension funds and insurers,” says Mark Versey, Chief Investment Officer, Global Investment Solutions at Aviva Investors. “They don’t need to match liabilities in the same way and don’t have the same regulatory constraints, which gives SWFs flexibility in terms of asset allocation. For example, they see infrastructure equity and other private asset classes as high-growth investment opportunities where they can put a lot of money to work.”

As well as investing for the long-term in developed-market real estate and infrastructure assets, SWFs are building their allocations to private-market assets in the developing world.

Where funds once sought the relative safety of government bonds issued by Western governments, they are now seeking to invest more widely to diversify their portfolios and take advantage of long-term trends, including the rise of consumer spending in emerging markets. At the forefront of these efforts are two of the more-sophisticated state investors, Singapore’s GIC and Temasek Holdings, whose investments range from Indian financial services to Filipino pizza parlours.

SWFs growing presence in emerging markets has some upside. These funds provide much-needed financing for governments and companies alike, and, crucially, this money is what is known in the industry as ‘sticky.’ SWFs are less likely than retail investors to sell out of emerging markets when economic conditions turn.

Indeed, a growing body of evidence suggests that SWFs are a stabilising presence in the financial markets. During the financial meltdown of 2008-‘09, for example, state-owned investors provided some $53 billion in capital to ailing Western financial institutions.2 And SWFs played a role in the recovery from the crisis, too, stepping in to provide lending even as banks withdrew due to tighter capital requirements introduced by regulators in Europe and America.

The efforts of the International Forum of SWFs and more recent initiatives such as the Long-Term Value Creation Index – a collaborative project between several SWFs and rating agency Standard & Poor’s to identify sources of long-term value – have reaffirmed funds’ commitment to intergenerational investment goals. As more SWFs provide capital to finance companies and infrastructure projects across the world, they may begin to win headlines for the right reasons.

Except where stated as otherwise, the source of all information is Aviva Investors Global Services Limited (AIGSL). Unless stated otherwise any views and opinions are those of Aviva Investors. They should not be viewed as indicating any guarantee of return from an investment managed by Aviva Investors nor as advice of any nature. Information contained herein has been obtained from sources believed to be reliable but has not been independently verified by Aviva Investors and is not guaranteed to be accurate. Past performance is not a guide to the future. The value of an investment and any income from it may go down as well as up and the investor may not get back the original amount invested. Nothing in this material, including any references to specific securities, assets classes and financial markets is intended to or should be construed as advice or recommendations of any nature. Some data shown are hypothetical or projected and may not come to pass as stated due to changes in market conditions and are not guarantees of future outcomes. This material is not a recommendation to sell or purchase any investment.

The name “Aviva Investors” as used in this material refers to the global organization of affiliated asset management businesses operating under the Aviva Investors name. Each Aviva investors’ affiliate is a subsidiary of Aviva plc, a publicly- traded multi-national financial services company headquartered in the United Kingdom. Aviva Investors Canada, Inc. (“AIC”) is located in Toronto and is registered with the Ontario Securities Commission (“OSC”) as a Portfolio Manager, an Exempt Market Dealer, and a Commodity Trading Manager. Aviva Investors Americas LLC is a federally registered investment advisor with the U.S. Securities and Exchange Commission. Aviva Investors Americas LLC ("AIA") is a federally registered investment advisor with the US Securities and Exchange Commission. AIA is also a commodity trading advisor (“CTA”) registered with the Commodity Futures Trading Commission (“CFTC”) and is a member of the National Futures Association (“NFA”). AIA’s Form ADV Part 2A, which provides background information about the firm and its business practices, is available upon written request to: Compliance Department, 225 West Wacker Drive, Suite 2250, Chicago, IL 60606.