While inflation is expected to rise after last year’s lows, it will likely be transitory. Sunil Krishnan explores what this means for the economy, yield curves and equity markets.
Sunil Krishnan, Head of Multi-asset Funds
Aviva Investors,  15 April 2021

Although there have been some difficulties in Europe, our view that vaccine rollouts will enable most developed economies to reopen in the medium term hasn’t changed. As a result, we expect to see higher US inflation in the near term due to base effects when comparing with 2020.

For instance, in the United States, the Federal Reserve (Fed) has a long-term two per cent target for the core Personal Consumption Expenditures index (core PCE), one of its preferred measures of inflation. Core PCE will likely run well ahead of its target for at least a month or two. However, we don’t expect inflation measures to continue coming in at those levels in the second half of 2021, and that by itself should dissipate some of the recent market concerns about a significant spike in inflation.

One indicator that could point to inflation becoming more entrenched is the housing market, as it has an important weight in US inflation measures, which try to capture home-ownership costs. We watch this closely, but resilience in the US housing market has not led to a meaningful rise in inflation so far.

Figure 1: Inflation could receive a short-term boost (per cent) 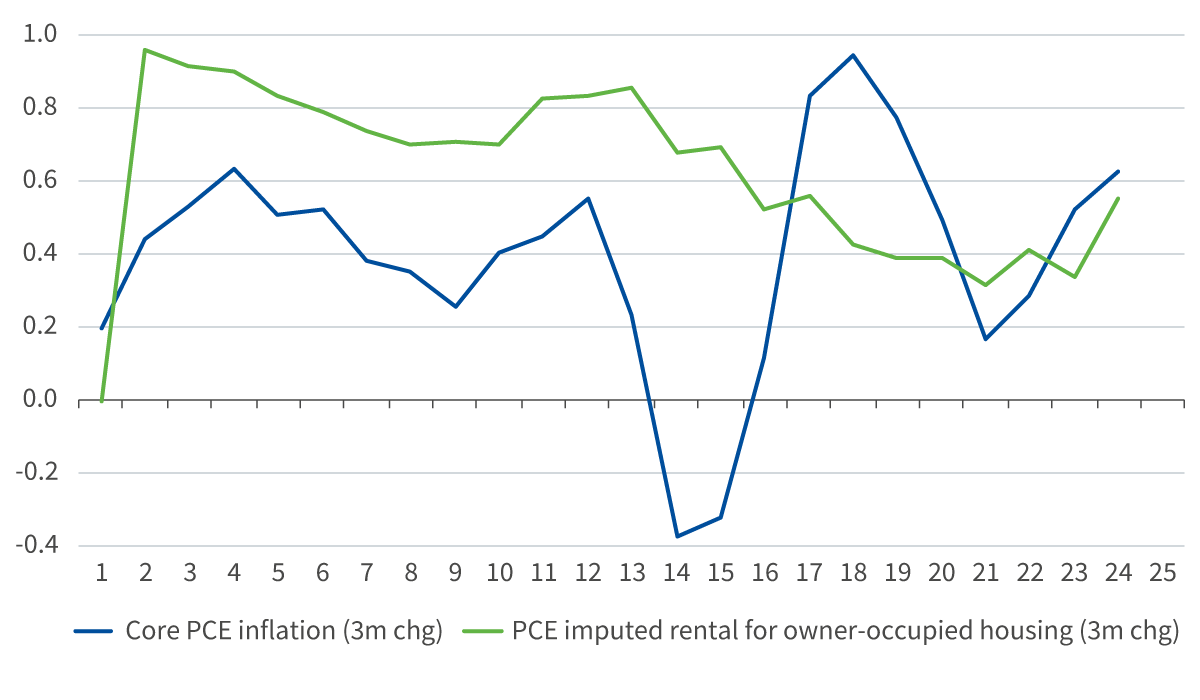 Any spike is therefore likely to be temporary; something the Fed supported in its most recent statement when it said it would not consider transitory inflation pressures sufficient reason to raise interest rates, particularly as the central bank aims to achieve inflation moderately in excess of two per cent for some time.1

iven this significant change in the Fed’s policy, which followed its framework review in 2020, it is trying to offer clarity that it will not move quickly to a tightening cycle. For instance, the dots showing various members of the Fed’s opinion about when they think interest rates will next rise indicated only a small minority expect rates to rise in 2022, and slightly more in 2023.2

From time to time, investors will continue to doubt the Fed’s commitment to keep policy, easy even as the economy seems on a solid footing. However, the Fed is clearly communicating its intention to keep rates low for a long time yet. Ultimately, that will provide support for the Treasury market, as well as for the real economy by keeping financing conditions loose, which will benefit listed companies.

However, it doesn’t rule out the possibility of a continued rise in longer-dated US Treasury yields. The immediate reaction to the March Federal Open Market Committee (FOMC) statement was a significant steepening of the US Treasury curve; while yields up to five years barely rose, there were much bigger rises at ten and 30 years.

Figure 2: The US Treasury curve has steepened 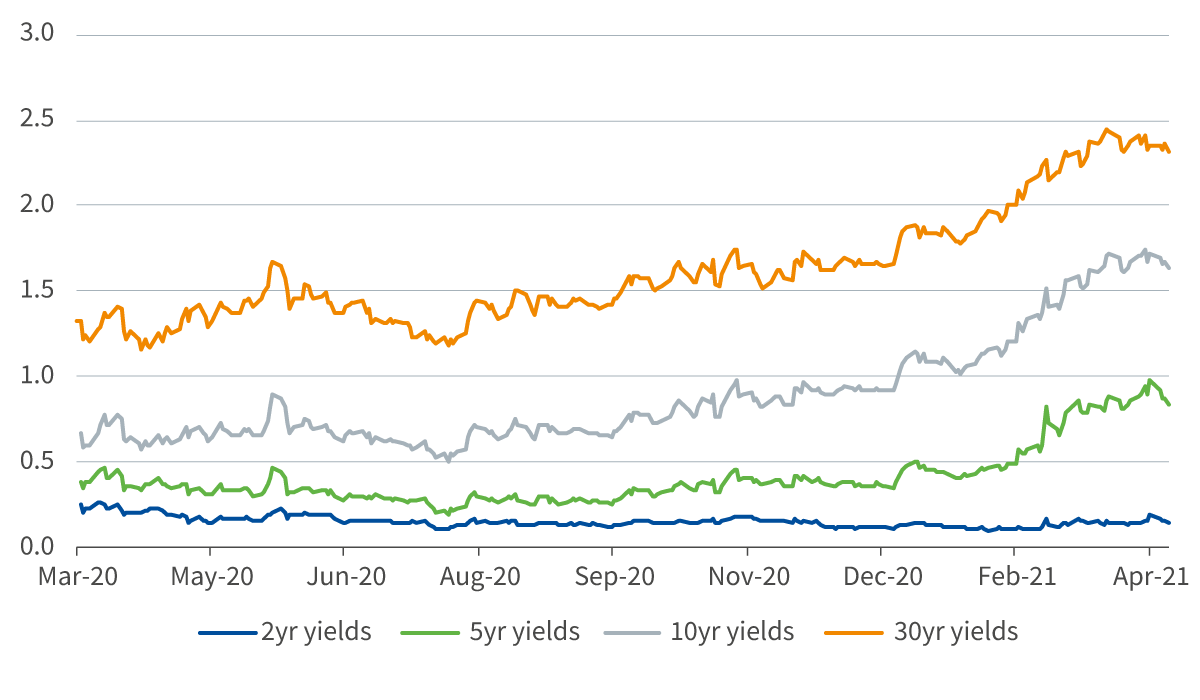 This is consistent with the Fed’s plan, which considers an upward-sloping yield curve a sign of more normal risk appetite and financing conditions as it (in theory) reflects an improving economy. A continued rise in yields in long-dated Treasuries therefore cannot be ruled out. Five-year yields could even rise if the economy recovers enough for doubts to re-emerge on the Fed’s commitment to keep interest rates down.

Treasuries may benefit, but limited upside in credit

While this possibility poses some near-term risks to Treasuries, it isn’t indicative of a breakdown in the bond market. The Treasury market is also becoming more attractive to non-US investors from a carry perspective compared to their home markets, which should limit downside risks.

As a result, while Treasuries should gradually regain some attractiveness and reach a point where they will offer both value and diversification potential for our portfolios, until then we remain neutral on government bonds.

In contrast, increased volatility in interest-rate duration makes the risk-reward less attractive for credit, particularly given credit spreads remain near to historically tight levels. As well as there being a risk of widening credit spreads if economic activity disappoints, higher volatility reflects the risk of a continued sell-off in duration. Therefore, having relied on credit significantly through the summer and second half of 2020, we are now slightly underweight, as the potential upside looks limited. 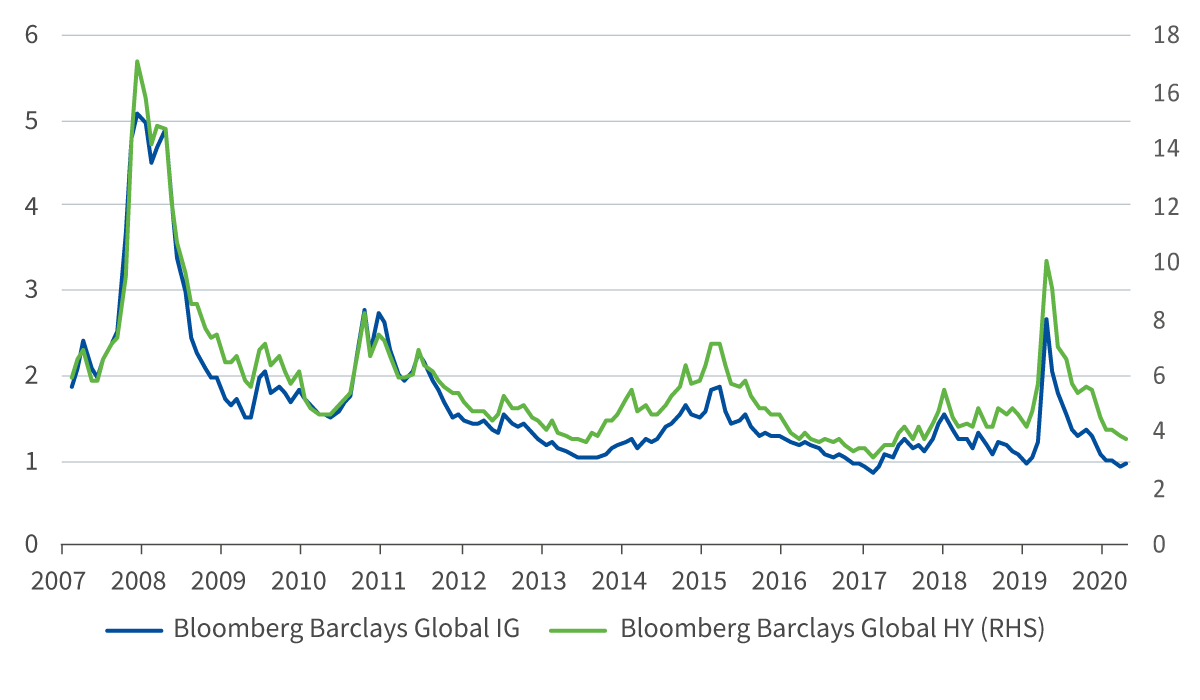 Firstly, it has meant that duration has played an unusually large part in driving total returns in the asset class in the year to date. As local-currency EMD is relatively short duration – generally four or five years – movements in local currencies tend to be the biggest driver of total returns. But given how volatile duration has been, it has become the bigger driver. This is not an attractive property for the asset class, and although a rate-hiking cycle has begun in some emerging markets like Brazil, Turkey and Russia, it has some way to run before the carry picture becomes compelling.

Figure 4: Bond declines have been a headwind for Emerging markets 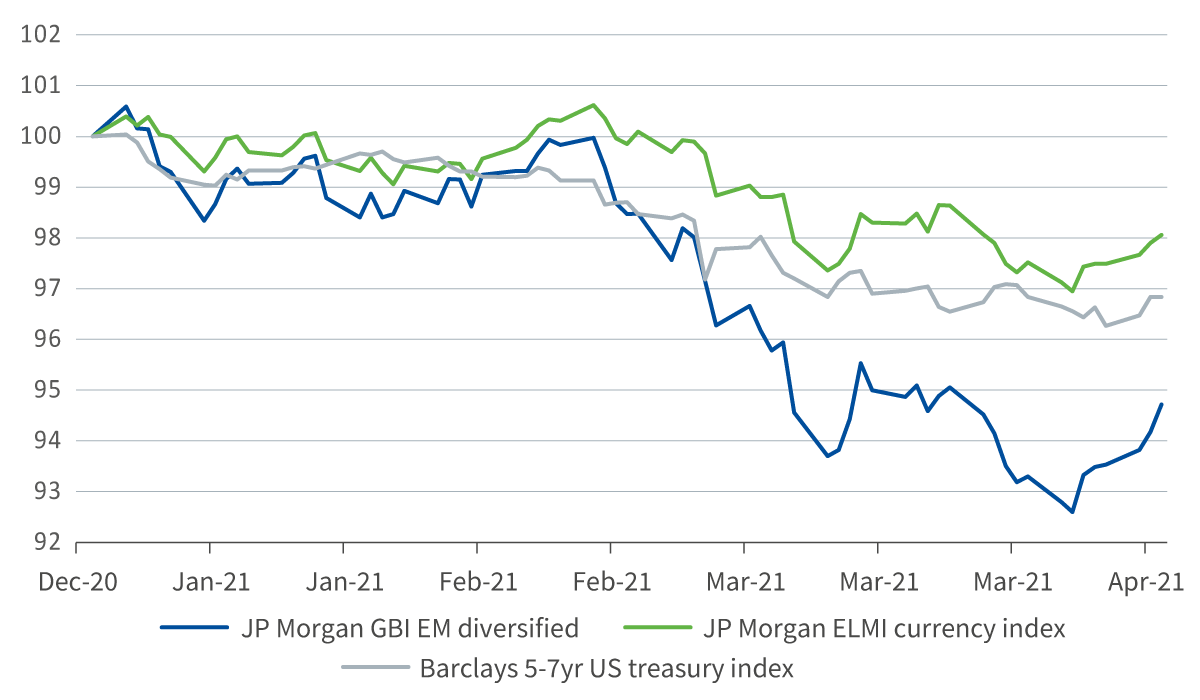 Secondly, the rise in longer-dated interest rates in the Treasury market is marginally supportive of the US dollar. This also makes it less attractive to take significant risk exposure on emerging-market currencies, whose performance is often negatively correlated to the US dollar.

In equities, this possibility of rising yields may threaten some high-valuation pockets, but we don’t expect it to impact the broader global market and retain our medium-term overweight. In contrast to the years following the global financial crisis, policy is being run very differently, with more fiscal support. This puts equities in a more privileged position, both generally and for specific sectors.

For example, the industrial sector typically benefits most from a combination of strong private-sector demand (supported by low interest rates) and fiscal demand, which is possible in 2021 and 2022. Although infrastructure spending was not included in the Biden Administration’s first round of stimulus, it has been the focal point of the latest package.3 There have also been moderate improvements in companies’ capex intentions, and the potential for growth is not yet reflected in valuations. 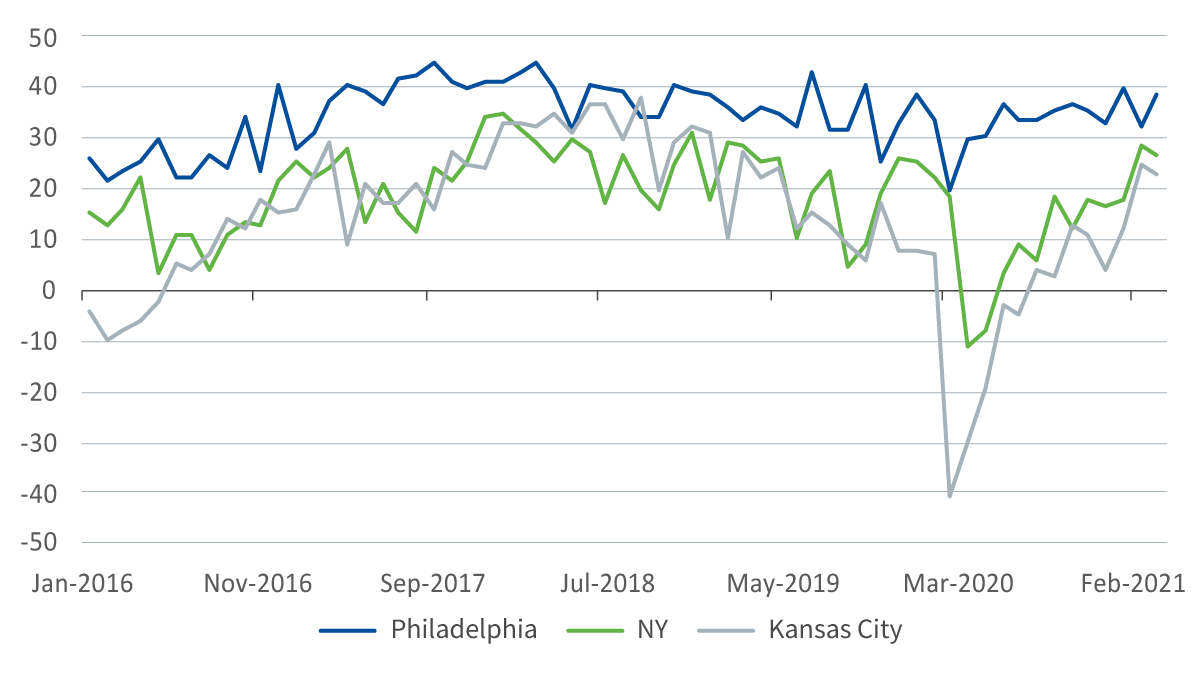 In terms of equity regions, we maintain our preference for the US and UK and are concerned about the outlook for emerging markets. While emerging markets led in terms of earnings momentum in the second half of 2020, they are now back in the pack.4 This could reflect the fact China – and the economies that depend on it – began to recover from the pandemic fastest, a recovery which may now be plateauing, while other economies like the US and the UK are catching up.

Some large Chinese companies are also caught in the political crossfire between Xi Jinping and Joe Biden. Minority shareholders are likely to be low on the priority list as these companies navigate the challenges, which reinforces our preference for a small underweight position in emerging market equities.

Current conditions offer more visibility in the equity market than in rates or credit. As a result, a significant amount of our portfolio risk is now in equities, both in our absolute and relative views. This is a significant change compared to 2020.