Oil and Water? Energy and ESG during the Financial Crash

Oil prices have dropped dramatically since the end of February, reaching levels not seen since the 1990s. This collapse was triggered by the inability of Saudi Arabia and Russia to agree on production cuts (at least until mid-April), leading the Saudis to dump cheap oil in a market where demand was already depressed by the Covid-19-induced slowdown. The current situation raises a number of questions, both about the impact of weak oil prices on ESG investment performance and, separately but not unrelated, about the incentive for investors to support the energy transition.

Underweight oil and gas is not the whole story

Market commentators have noted that a number of ESG funds have outperformed both their non-ESG peers and their benchmark since the beginning of the Covid-19 crisis, which for Europe and the US can be dated from early March. This is also the time at which oil prices began their nose dive.

Hence the question: Do weak oil prices explain the ESG outperformance, considering that many ESG strategies were underweight the energy sector? Being underweight in an underperforming sector clearly played a role, but not one big enough to explain the ESG outperformance. Oil & gas companies only represent around 5% of the MSCI World index even if in some asset classes, such as high yield bonds, oil & gas companies still make up a significant share of the market. Unconventional oil & gas has been hit harder, and smaller producers hit more than larger and more solid companies. Since ESG analysis tends to guide away from bituminous sands or hydraulic ‘fracking’ activities, ESG strategies, even when invested in energy companies, were able to avoid the brunt of the oil-price-related elements of the crash.

For instance, this was the case for the global high yield strategy managed by Candriam. Most of our strategies do not exclude oil companies. Our ESG analysis leads us to favour those which are the most advanced in their environmental practices. It was these oil & gas securities which were less punished by investors on a relative basis.

Are weak oil prices likely to derail the energy transition? After all, cheaper oil prices means that it has become financially more attractive to burn oil than it was before. First, it is interesting to note that renewable energy stocks do not exhibit a significant correlation with oil prices, as can be seen from this chart borrowed from Sustainalytics (shorturl.at/jTU24). 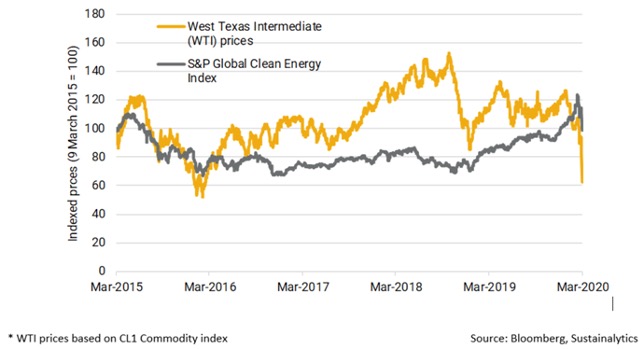 The relative attractiveness of renewable energy is hence more linked with natural gas prices than oil prices. Natural gas prices do not move in lockstep with oil prices due to different market dynamics and because gas contracts tend to be negotiated to cover several years of supply, making gas spot prices less relevant than for the oil market. Therefore it is not clear at all that the recent weak oil prices will significantly impact demand for renewable energy; much will depend on the duration of low oil prices. A longer period of sub-$30 bbl oil could shift some demand from natural gas to oil, where there is possibility to substitute, depressing demand for natural gas. It remains too early to tell.

Finally there is the fact that the energy transition is as much a political achievement as a market-driven process. Whilst renewable energy sources that can compete in terms of cost with fossil energy makes for an easier sell to investors and market participants, the energy transition still is, and needs to be, supported by a strong political will. And what does the Covid-19 crisis demonstrate, if not that governments are willing and able to step up when a global threat endangers the lives of millions of people. Climate change is another such global threat, except that the symptoms manifest themselves not directly by weakening the immune system, but indirectly by creating conditions where diseases can spread, human habitat is destroyed, and food supplies dwindle. In Europe the current European Commission has been at the forefront on addressing climate change, launching an agenda including financing initiatives and new regulations, such as the one defining what can be considered as a ‘green’ activity. Oil & coal are definitely not part of that category, at any price. On top of that, addressing the risks of future viruses which may spread from wild animal species to humans involves similar solutions as some of those which are being advocated to tackle climate change -- such as preserving virgin forests and reversing the global destruction of biodiversity. It is not a choice between tackling two global risks. They are interrelated; neither problem cannot be addressed whilst ignoring the other.

Concurrently, this crisis does not signal the end for oil. It still represents around 34% of global primary energy consumption. Rather than ignoring oil companies, our role as investors is to make sure they ‘up their game’ when it comes to reducing their negative environmental externalities, and use their huge balance sheets to support the energy transition. At Candriam we have long supported shareholder resolutions asking oil companies to integrate the Paris Agreement requirements in their strategic planning. We have also advocated directly with several of them to withdraw their support for lobby groups spreading false information on climate change. We need more investors engaging with oil companies, not fewer.

One does not make a problem disappear by looking the other way.