EM equities: Will Chinese regulators tear down the house that Jack built?

When Jack Ma started his e-commerce company in 1999, he decided to call it Alibaba, after the famous character from the One Thousand and One Nights. In the story, Ali Baba opens the door to a cave of treasures using a magic phrase: “Open sesame.” Ma pledged that his company, like its namesake, would “open a doorway to fortune”.1

As his business empire flourished, Ma became a global celebrity. At the G20 Summit in Hangzhou in 2016, visiting dignitaries divided their time between conferences with Xi Jinping and audiences with Ma at Alibaba’s headquarters.2

But in late 2020, Ma overreached. On October 24, he delivered a speech at a high-level business forum, likening state-run banks to pawnshops and branding financial regulators “an old people’s club”.3 The following week, the Shanghai Stock Exchange cancelled Ant Group’s $37 billion initial public offering (IPO) – which would have been the world’s biggest – citing “changes in the financial regulatory environment”.4 In December, the State Administration for Market Regulation (SAMR), an antitrust body, started investigating Alibaba over alleged monopolistic practices.

Ma disappeared from public view, prompting rumours he had been detained by the authorities. After a three-month absence, he posted an online video on January 20, pledging that he and his colleagues would devote themselves to “education and public welfare”.5

So, are the doors of opportunity finally slamming shut for Alibaba? And what does Beijing’s new trustbusting stance mean for the wider technology sector? In this Q&A, Alistair Way, head of emerging market equities, discusses the implications for investors.

What does the crackdown on Alibaba and Ant tell us about the regulatory environment for Big Tech in China?

Regulation of technology companies is tightening everywhere – it’s a global trend. In practice, though, Chinese tech firms were already under much more state influence than their counterparts in the US or Europe. What we are seeing is more of a shift in emphasis from the authorities. Beijing is trying to balance the interests of China’s national tech champions with its own policy objectives.

Although the timing was dramatic, the intervention to thwart Ant Group’s IPO shouldn’t have come as a surprise. This is not the first time regulators have put pressure on the company; in 2016 the government imposed restrictions on Ant’s popular money-market fund, Yu’e Bao, because of potential liquidity risk. It looked as though Ant was trying to aggressively push through its IPO on a wave of publicity from investment banks and hysteria among retail investors, before regulators could properly assess the implications for financial stability.

The investigation into Alibaba is more interesting, because it suggests e-commerce is now under closer regulatory scrutiny. Previously, authorities had focused on social media and gaming because of the potential for political dissent to spread online.

Why has e-commerce drawn the attention of regulators now?

Jack Ma’s inflammatory speech might have been the catalyst for regulators to take a closer look at his companies, but there are underlying economic issues the government is trying to tackle. Take the “community-buying initiatives” that became popular during the pandemic, whereby groups of people would club together to purchase heavily discounted groceries via e-commerce platforms. These schemes have sparked concerns over employment, because smaller food retailers are being squeezed out.

This is one of many e-commerce practices the government is targeting, drawing on new antitrust guidelines unveiled last year. In December, the state-run China Daily ran a strongly worded editorial warning that monopoly behaviour “hinders fair competition, distorts resource allocation, harms the interests of market players and consumers, and stifles technological progress”.6

Policymakers may be concerned about a possible backlash if tech firms persist with unpopular tactics, such as using AI algorithms to offer consumers different prices for the same product based on their ability or willingness to pay. A government-backed consumer-rights association recently accused tech firms of “bullying” their users with such methods.7

What penalties does Alibaba face if it is found to have broken the rules?

The maximum fine for breaching the antimonopoly rules is ten per cent of the previous year’s revenues, which would be insignificant in the context of Alibaba’s gargantuan balance sheet. It is conceivable regulators would go further, and force Alibaba to spin off some of its non-core units or curtail further empire building in areas such as cloud computing. But the company’s central e-commerce business is so vast it would be more-or-less impossible to break up, and it wouldn’t be in the government’s interests to try.

Ant Group looks more vulnerable. Valuations of Ant have been slashed over reports the firm will be forced to reorganise under a new holding company, so it can be regulated more like a traditional bank. Officials at the central bank have also ordered Ant to rein in its successful consumer lending and securitisation businesses.8

It is very unlikely the company will be able to return to the market with a public offering anywhere near the $37 billion originally planned. Having been reminded that internet finance in China is subject to huge regulatory risk, investors would demand a much higher risk premium next time around.

Has the Alibaba situation affected investor sentiment towards China’s other tech firms?

Alibaba’s shares have lagged those of other large Chinese tech firms since its regulatory troubles began. Investors in emerging market equities appear to have decided this is an Alibaba-specific issue, and that rival Chinese e-commerce firms such as JD.com, Meituan and Pinduoduo will be able to take the opportunity to gain market share.

I’m not so sure. It is true Alibaba was already battling on numerous fronts with its rivals before the antitrust probe was announced: JD.com has the superior logistics operation and better-quality goods; Pinduoduo is catching consumers’ interest with its distinctive, entertaining platform; and Meituan is using its strong local distribution operation to snatch customers from Alibaba’s food-delivery subsidiary. But investors need to look at which way the wind is blowing on regulation. Alibaba is not the only company that offers subsidies for community-buying schemes; Meituan and Pinduoduo are involved as well. Antimonopoly regulators are unlikely to stop with Alibaba.

If the outcome of this antitrust action is a more balanced and diversified competitive environment, that would probably benefit the market as a whole. At its peak on October 27, Alibaba accounted for as much as 8.9 per cent of the MSCI Emerging Markets Index, bringing concentration risk. Its shares fell after the regulatory clampdown on Ant and suffered a further sharp dip in December, after the investigation into Alibaba itself was announced. By the end of the year its index weighting had fallen to below six per cent (see Figure 1). 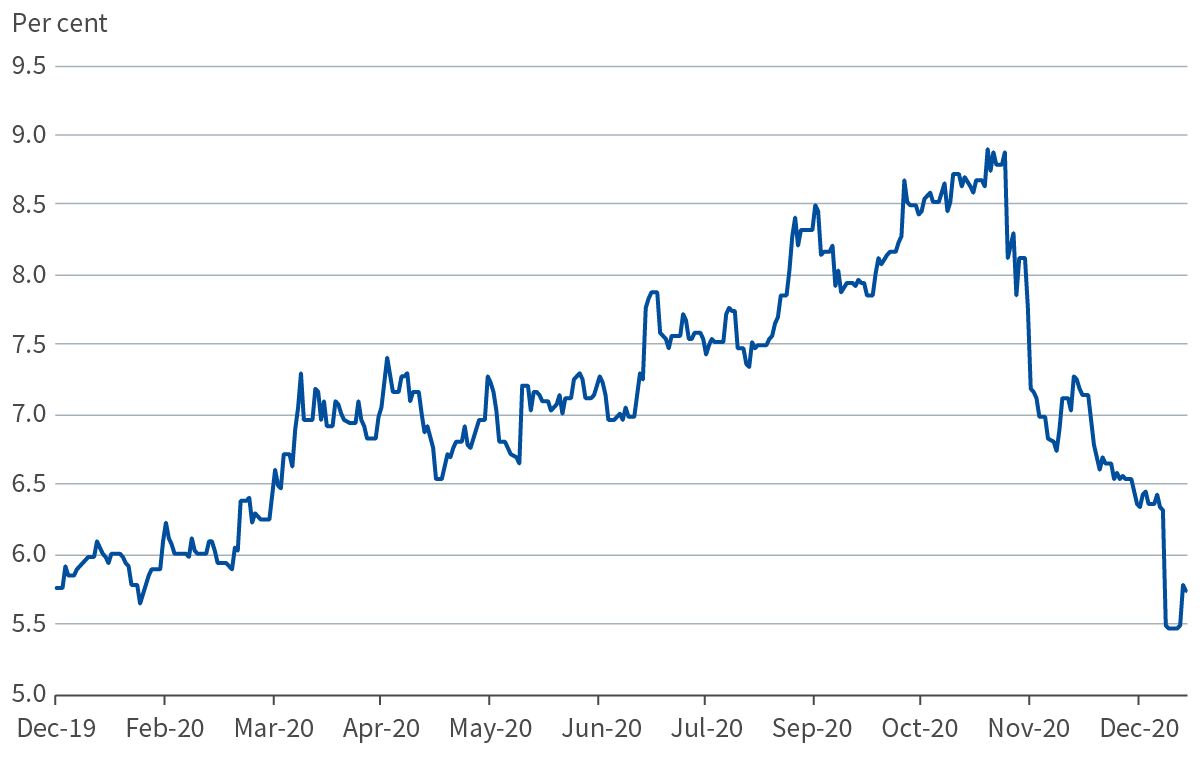 Will any smaller tech firms gain an advantage, if regulators continue to put pressure on the giants?

There are some smaller companies whose business models look more aligned with the government’s current objectives of promoting employment and balanced growth. One is called Dada Nexus, a firm that works like eBay for local supermarkets: its platform allows smaller retailers to connect with customers online to sell their stock.

The government wants traditional food retailers to survive – they have cold-chain facilities, good inventories, fresh-food distribution routes – and a company that helps these firms gain a digital presence is more likely to stay on the right side of regulators than one that aggressively seeks to put them out of business.

How will the Ant regulation affect the financial landscape?

Regulatory pressure on Ant should favour the large incumbent banks, now that their leading digital challenger has had its wings clipped.

Chinese financial institutions were already in a robust position, given the strong GDP growth numbers posted in January. From an investment perspective, Chinese banks tend to offer higher dividend yields and lower price-to-earnings ratios than their counterparts in other emerging markets. The regulatory moat against digital insurgents gives them a further competitive boost.

Does Jack Ma’s downfall tell us anything new about the risks of investing in China?

It serves as a reminder of something investors in China should have known already: you always need to be aware of subtle shifts in the tone of statements emanating from official bodies. No company – not even a goliath like Alibaba – is big enough to defy the state.