Compare and contrast: COVID-19 and the Global Financial Crisis

Is there a lesson to be drawn from history? No two crises are the same but useful insights can be gleaned from comparisons, as Jerome Nunan explains.

Following a decade-long bull market, punctuated by occasional bouts of volatility, many investors have little or no experience of market conditions such as those we have experienced since late February. Understandably, many investors are asking whether this is a repeat of the Global Financial Crisis. With this in mind, we have compiled the following brief guide.

The extent of the economic collapse during the GFC is laid out in Figure 1. The contraction in activity was significant, dwarfing declines that had been experienced in prior recent slowdowns such as the Dotcom bust of 2000-2003 and the Asian Financial Crisis of 1997-98.

However, as Figure 1 shows, the impact of COVID-19 is expected to have an even bigger impact on economies and be the biggest downturn since the 1930s.

So, by the time the heavy selling of late 2008 occurred, markets had been trending down for almost a year.

Figure 2 contrasts the moves in markets after hitting their respective peaks in October 2007 and February 2020. 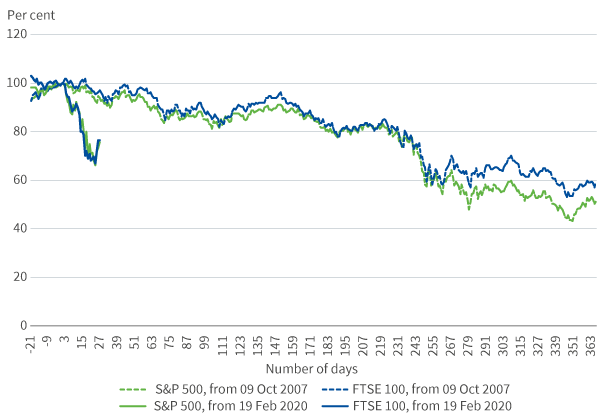 It illustrates the speed with which the market drawdown has occurred in 2020, compared to the slow-burn during the first year of the GFC.

The true impact of COVID-19 was swifter and deeper

Furthermore, as Figure 3 shows, the collapse in markets as the true impact of COVID-19 emerged was swifter and deeper than that even in the weeks after the Lehman Brothers bankruptcy. 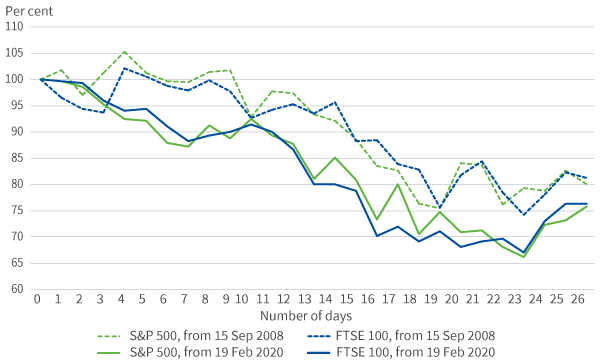 While radical measures were implemented, they were not universally favoured, and it took time to get agreement on them.

What can we learn?

Both crises can be characterised by fear of the unknown. Today, fear is driven by the extent to which COVID-19 has infected the broader population; how long it will be before people can resume normal life; and what normality in future might look like. And while the financial crisis may have felt like a transitory event from a market perspective, at the time it felt just as existential as the current pandemic. Given the uncertainty about what the global economy might look like over the short to medium term, it is understandable that investors have reacted in the way that they have.

Greater clarity in relation to the spread of the virus and our ability to counter it will help determine whether current valuations are fair or a good buying opportunity. But markets are a forward-looking mechanism and, while we shouldn’t discount the possibility of further volatility ahead, we should remember that markets will reprice future growth long before the economic data supports such moves.

Authorities have moved at speed to deal with the immediate economic consequences of the pandemic. Investors should maintain a clear line of sight on their long-term goals and the opportunities currently on offer.