Are bond investors too complacent about inflation?

US economic output rose above its pre-pandemic level in the second quarter, figures released on July 29 showed. At the same time, surging commodity prices together with bottlenecks in manufacturing supply chains have driven headline inflation to within a whisker of a new 30-year high. This makes recent events in US bond markets somewhat puzzling.

Ten-year nominal Treasury yields, which hit their highest level in a year in March having climbed on the belief the worst of the pandemic was over, have subsequently fallen nearly 60 basis points, as seen in Figure 1. 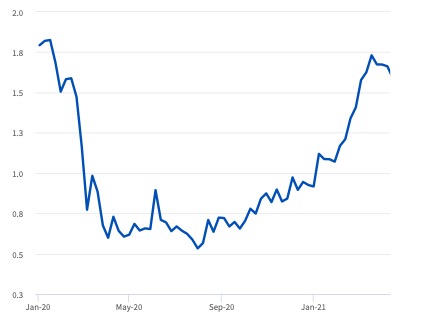 The combination of falling nominal yields and high inflation readings has in turn driven the real US ten-year yield – the nominal yield less breakeven inflation – to its lowest level in a quarter of a century. Real yields, adjusted for actual inflation, are lower than at any time since 1980. 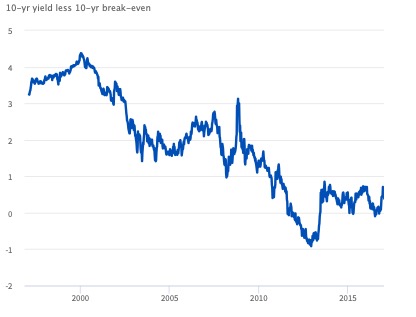 There are at least two potential explanations for this decline in nominal and real yields, one of which is related to the ‘peak growth’ narrative. According to consensus forecasts, US GDP growth will average close to seven per cent in 2021, falling to 4.5 per cent next year, as the boost from re-opening all sectors of the economy begins to fade.

Moreover, some believe those forecasts to be too optimistic given the release in recent weeks of weaker than expected US job creation and second quarter GDP data, and an acceleration in the spread of the Delta variant of COVID-19.

At the same time, the Federal Reserve has played down concerns it was getting behind the curve and risked letting inflation get out of control by permitting the economy to run hot for too long. While the central bank continues to insist the pick-up in inflation will almost certainly be transitory, recent statements by Fed officials indicate they are aware of the dangers.

The ‘dots’, which show projections for its main borrowing rate, suggest the Fed could tighten monetary policy by 2023, a year sooner than seemed likely at the start of the year. This has helped drive a drop in market expectations of future inflation, as measured by US ten-year breakeven inflation rates (see Figure 3). 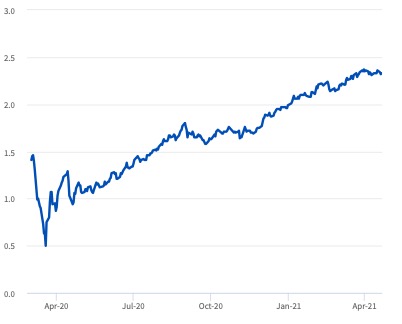 Back to the seventies?

While the Fed may have convinced investors of its determination to prevent inflation taking root, the drop in yields may mean bond market participants underestimating the possibility of inflation remaining higher for longer.

At the start of the year, inflation was widely expected to pick up as the base effects of a collapse in energy prices in the spring of 2020 began to show up in year-on-year inflation readings. However, the magnitude of the increase goes well beyond those effects thanks to the ongoing rise in commodity prices, persistent and more severe bottlenecks in manufacturing supply chains and big jumps in the price of certain constituent items of the Consumer Price Index (CPI), such as used cars, travel and accommodation.

Looking ahead, most of these inflationary impulses are likely to gradually fade over the next six to twelve months as supply bottlenecks ease as new capacity comes onstream. There is a sizeable pool of unemployed workers, unlike in most previous inflationary episodes, even if there is no precedent for the kind of shock the US and other economies have undergone over the past 18 months.

Then again, there are other examples – particularly in the 1970s – where a not totally dissimilar supply-side shock fed into expectations of future inflation and higher wages. While there is little to suggest much, if any, risk of a return to the levels of inflation witnessed back then, there are reasons to believe inflation will prove more intractable than markets anticipate and is likely to gravitate towards a higher average rate than has been experienced since the global financial crisis.

Given the current high rate of unemployment, it may also seem there is little risk of the rise in CPI feeding into more deep-seated inflationary expectations. However, the pandemic appears to have brought about seismic changes in the labour market. As the economy continues to open, acute skills shortages are appearing in some sectors, forcing many firms to raise wages. According to the employment cost index measure, private sector wages grew 3.5 per cent in the year to the second quarter of 2021, the strongest rate of increase since before the financial crisis.

Stylistically speaking, the combination of these two measures corresponds to distinct stages of the economic cycle. For example, when an economy is in recession you tend to see falling real rates and rising breakevens as central banks cut rates aggressively and markets begin anticipating a recovery. As the recovery gets underway, real rates eventually begin to rise as markets sense the peak of monetary easing has passed. Towards the end of the expansion phase, while real rates continue rising, breakevens start to fall. The final phase, as the economy goes into recession, sees both real rates and break-evens falling.

If, as we expect, inflation proves to be more intransigent than is being priced in by financial markets and settles at a higher level than they have become accustomed to in recent years, the recent decline in both real interest rates and breakevens is likely to be short lived. That in turn has implications for various asset classes. As shown in Figure 4, the combination of rising breakevens and rising real interest rates would be among the more favourable environments for developed market equities, in this case the S&P 500.

Figure 4: Weekly performance of SPX in different BE and real rate regimes (since 2012) 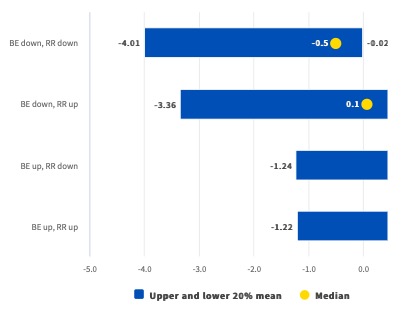 By contrast, this would be a far less rewarding environment for emerging market equities, which tend to outperform earlier in the economic cycle. If the recent decline in real rates and breakevens reverses, as we anticipate, it will also clearly spell trouble for bond markets.

This analysis is not sufficient on its own to determine specific positions within our multi-strategy and multi-asset portfolios; not least because the distortions created by central banks make it dangerous to read too much into price signals from financial markets at present.

Nonetheless, our view that the risks to inflation are to the upside, and potentially appreciably so, has reinforced our short US duration conviction, while we maintain an overweight stance towards equities more broadly. We also maintain exposure to equity sectors that tend to fare well in rising inflation and rate environments, such as energy and industrial stocks.