The price of self-sufficiency

The disruption of global supply chains has been a wakeup call for the European Union. For years, the principle of an open and free Single Market has led to a massive transfer of industrial production and outsourcing mainly to Asia.

The disruption of global supply chains has been a wakeup call for the European Union. For years, the principle of an open and free Single Market has led to a massive transfer of industrial production and outsourcing mainly to Asia. The Covid-19 crisis showed that Europe’s dependency was higher than most political leaders and decision makers would have imagined and could lead to greater disruption with sometime deadly consequences. It has become crucial to ensure at least some form of self-sufficiency when it comes to critical products but the cost of independence might be much higher than expected.

Assessing Europe’s dependency, the Commission has identified 137 products for which the EU is highly dependent on external production, 34 of which are unlikely to be replaced (raw materials and oil for instance). That leaves more than 100 products in sectors such as healthcare, electronics or chemicals. China represents more than half the value of imports of the most foreign-dependent products, followed by Vietnam, Korea, Singapore and Brazil with a much smaller value, while the US, the UK or Japan only accounts for 3% (see chart 1).

Looking at strategic sectors, we can see extreme concentration in certain areas such as semiconductors and pharmaceutical products, with European dependency set to become more critical in a post-Covid world. Europe’s pharmaceutical industry boasts leading global players, but imports most of its active pharmaceutical ingredients (API) and excipients from India and China (see chart 2). Sole medicines are no longer produced in Europe due to cost pressure.

China represents more than half of foreign dependant products.

China holds a strong position in the supply chain of antibiotic, antiviral, anti-bacterial and anti-inflammatory medications. India is world leader in the central nervous system and respiratory segments1. It is unclear though just how much it would cost to reonshore the production of these drugs since the pharma industry is highly integrated. However, the impact on end customers would be higher prices if they were made in the EU.

There are at least three different ways to deal with dependency issues. One is to diversify the sources of supply. Another is to build inventories, or to create (recreate in many cases) production capacities within the EU. The cost vs risk vs benefit is obviously not the same. Building inventory might not be possible in some cases such as perishable goods and ever-evolving technologies, or simply doesn’t make sense in the case of software for instance. Diversification of sources doesn’t entirely solve the issue. Europeans will still rely on a third party willingness to deliver what is needed which in the case of a global pandemic like Covid-19, might not be possible. Consequently, the on-shoring of highly dependent but critical production is the safest way, but might not be an easy or cheap journey.

Let‘s take the example of digital sovereignty. As Thierry Breton2 points out, it requires “an autonomous European capacity in microelectronics” meaning Europe would have to be self-sufficient in the manufacturing of semiconductors. This sector has a very complex supplychain with many players involved in design, lithography, manufacture (foundry) or distribution. Yet, when it comes to the production of chips, it has all the characteristics of an oligopolistic commodity market with a very small numbers of players (see chart 3), namely Taiwan, Korea and China… and very high barriers to entry (technologic edge and mass production capabilities). Moreover the region is subject to high seismic activity and political tensions.

The world relies on Taiwan and Korea for leading edge semiconductors.

The European share of the €380 billion ($440bn) global semiconductor market is less than 10% in value, down from 44% in 1990. The European Commission’s ambition is to reach 20% by the end of the decade (in line with its share of end users demand3). Today chips produced in Europe are mid-range (20 nm and above) mainly used in the auto industry, but there are no cutting edge semiconductors foundries, which are necessary for products such as mobile devices or selfdriving cars. The challenge is thus not only to ramp up production capacities in Europe but also to upgrade manufacturing sites. Both require significant investments, a long-lead R&D strategy and talented engineers. TSMC (Taiwan) and Samsung (Korea) are currently the only manufacturers able to produce nodes below 7nm while customer demand will rise over the next 3 years for 5G and AI4. Europe can rely on the global lithography leader ASML but that’s only one piece of the puzzle. Despite public support, it is not certain that European players will be able to reach Taiwan’s leading production 3 Source SIA and BCG April 2021 4 TSMC 2020 Annual Report capabilities on a profitable scale even 10 years from now. To put things into perspective, leading players have invested from $10bn to $20bn per year over the past decade (see chart 4). In April, TSMC announced a 3-year $100bn capex plan to cope with strong client demand (Apple, Qualcom, and Nvidia). This followed Intel’s announcement of an additional $20bn investment in two new plants in Arizona and Samsung’s $100bn capex over the decade.

To have any chance of reaching 20% market share including cutting edge foundry capabilities in order to ensure selfsufficiency and strategic independence by 2030, Europe needs to invest from €300bn to €400bn in public and private sector money over the decade (see chart 5). That would go on top of the upfront €20bn to €40bn cost of building the plants. For comparison’s sake, the entire Next Generation EU budget for the digital transformation and innovation is €143bn over 6 years. Assuming there is enough public and private sector funding to reach the production goal, and that European engineers are able meet this R&D and production challenge, it is unlikely the marginal cost will be smaller than that of the northern Asian foundries. That means government subsidies or taxes on imports will probably be needed, at least on certain categories of imported chips, to ensure that EU semiconductor manufacturers gain market share and reach critical mass. This is inflationary in nature5. 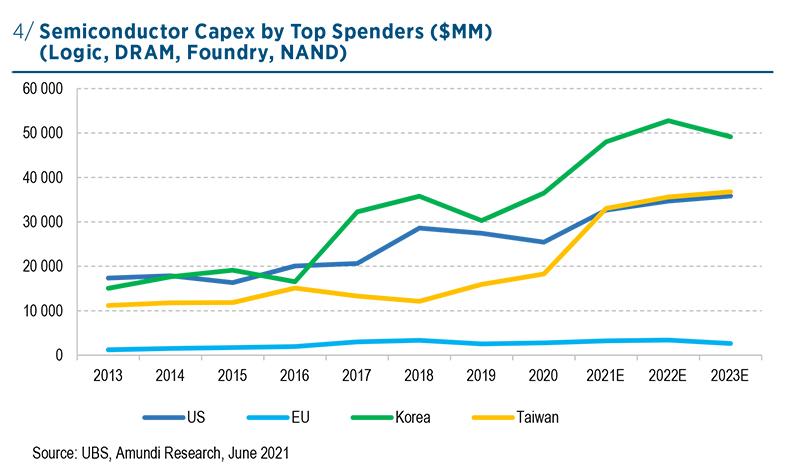 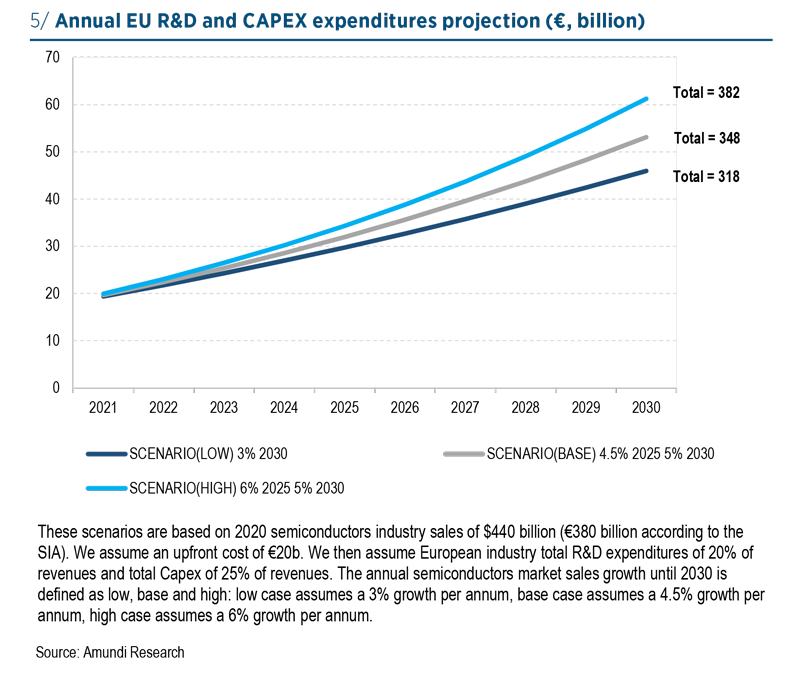 Europe’s response to the Covid-19 crisis is a legitimate call for self-sufficiency in strategically dependent sectors. In the case of electronic components, the EU can mobilize industrial stakeholders to design a European Flagship project in the form of a second Important Project of Common European Interest (IPCEI). The first IPCEI has already collected €8bn plus around €5bn of public and private sector money for R&D6. In total, the EC believes that it can collect €20bn to €30bn7. Part of the Recovery and Resilience Fund will be allocated to this project. Still, that might not be enough to achieve the ambitious goal of 20% market share. The EU can also ask its partners - starting with the US - to build manufacturing capacities in Europe. But that comes at a cost. According to recent talks between the European Commission and Intel, the US chipmaker is asking for an $8bn dollars welcome check to build a plant in Europe8.

Instead of pursuing a self-sufficiency through uncertain large industrial plans, Europe could strengthen its supply chain resilience, reach minimum autonomy in highly critical segments such as defense and security or aerospace, and use public money to support R&D and own intellectual property.

In reality, the price of self-sufficiency might be much higher than political leaders and taxpayers are ready to pay.